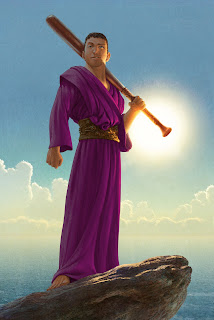 Meet Hercules. As if you haven’t met him plenty of times before. Seriously, you can’t get away from this guy if you’re reading Greek myths.

So which is it: Hercules or Heracles? Heracles is his Greek name. He’s better known by his Roman name Hercules, which is what most people, even Greek demigods, tend to call him. At the end of his life, his dad Zeus made him a minor god, the doorkeeper of Olympus, but if you value your life, don’t call him a “minor” god to his face. And also, avoid the topic of that horrible Disney animated movie based on his life. As usual, the movie got NOTHING right. He tends to get a little agitated about that topic, and you’ll notice he carries a sizable club.

You will meet Hercules face-to-face in The Mark of Athena. Friend or foe? Oh, boy . . . the demigods aboard the Argo II had better pray he’s a friend. Then again, demigod luck is never very good . . .