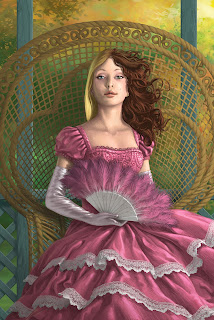 Our next art reveal for The Mark of Athena: the Roman goddess of love herself, Venus, otherwise known as Aphrodite.

It’s hard to capture Venus in a picture, because her appearance is constantly changing, morphing into what each viewer would see as the ultimate expression of beauty. That’s why this picture captures her in transition as both a blonde and a brunette.

What is Venus up to in The Mark of Athena? She may try to help her daughter Piper and the rest of the demigods, but when Venus helps, it isn’t always, well, helpful.

I’ll release the last two pieces of character art this weekend as a Labor Day treat, so stay tuned!