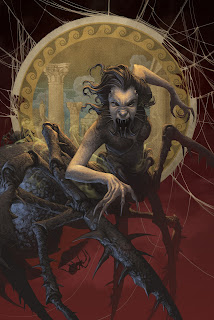 Our final art reveal for The Mark of Athena is the original spider lady herself: Arachne. Maybe you’ve heard her story. Once a mere mortal, Arachne dared to call herself better than Athena at weaving. Gods are proud. Calling yourself ‘better than Athena’ is only slightly less dangerous than juggling unpinned grenades.

The goddess challenged Arachne to a weaving contest. Arachne lost. As her punishment . . . well, there are many stories. Some say Arachne hanged herself in shame then became the world’s first spider, the weaver of the animal world. Some say Athena turned her into a spider on the spot, cursing her children for all time to be creepy eight-legged weavers.

No spoilers, but I say Arachne is still out there, waiting for revenge. All spiders hate the children of Athena. How do you think Big Momma Spider feels about them? You’ll find out in The Mark of Athena, and I’ve got to say, this is probably my favorite villain yet!

This is our last art reveal. In exactly one month, on October 2, The Mark of Athena arrives! (This release date is for the US, Canada and the UK. I don’t know about other countries. Ask a local bookseller or the publisher in your country.) I’ll be announcing North American tour information soon, so stay tuned!