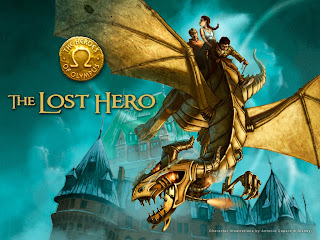 Today Disney issued a major press release for The Lost Hero, the first volume of my new series Heroes of Olympus, which will be published Oct. 12. The news broke in Publishers Weekly. Among the exciting news, The Lost Hero will have an initial print run of 2.5 million copies, and will be released simultaneously in hardcover, ebook, and audio formats.

The series site is now live! Be sure to visit for a cool video trailer, tour information, downloadable wallpaper, sneak previews, and much more!
The world launch party for The Lost Hero will be Oct. 12 at BookPeople in Austin. If you can’t join us in person, don’t worry! We will be streaming the event live online, and thousands of demigods will join us virtually for the celebration. You can find more information about how to join us on the series website, and I’ll be making an exciting announcement on the webcast as well, so be sure to tune in.
I’m so excited about The Lost Hero! I hope you enjoy the new series as much as I loved writing it, and I think you’ll be surprised (pleasantly, I hope) but what’s going on in Percy’s world.
As always, the only hard part of the book tour is all the places I don’t get to go. We only have two weeks, so obviously I can’t go everywhere I’d like to. For the Kane Chronicles in May, we concentrated mostly on the eastern half of the country, so for this tour we’ll be in the western half of the country. Still, there are a lot of places we won’t be able to visit. Nevertheless, I hope you’ll join us online for the book launch event, and if you need a signed book, remember almost all the stores that are hosting events will be more than happy to take phone or internet orders in advance and ship the signed books to you after my visit.
And now, back to the world of the Kane Chronicles. I’m just wrapping up work on the second book in the series, due out May 2011, and Carter and Sadie are in quite a dangerous situation!