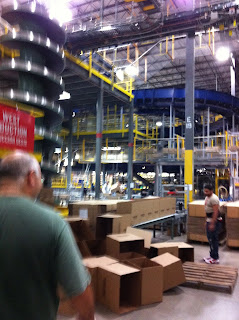 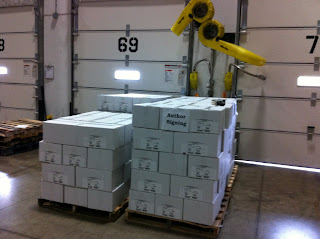 The Riordan family took a brief trip to New York over the weekend, which was a nice break for me before diving into my final revisions for Kane Chronicles 2.

While in the city, I got to see the finished copies of The Lost Hero — very exciting! The book doesn’t come out until Oct. 12, but it looks beautiful. I visited the Barnes & Noble distribution center early Friday morning and signed 3000 copies for pre-orders. You can see the palettes above, but it doesn’t give you a good impression of just how many books that is! The intrepid staff from Disney helped me get through them, though, and seeing the distribution center was worth the trip. It’s the size of a small city, and is buzzing with activity — forklifts, conveyor belts, box-making machines. I was tempted to order a book on-line just so I could see it come off the assembly line.
After B&N, I headed into the city and signed another 1000 copies for other retailers at Disney headquarters. Yes, my hand was sore! My oldest son Haley got to come with me and get some advice on his own manuscript in progress from my very generous editor Stephanie, then we had a great lunch (Greek food, naturally). Haley is an adventurous eater and had the octopus. Me . . . not so much.
Saturday, I headed out to Adelphi University in Garden City and gave a lecture on reading. The crowd was large and enthusiastic. What a great campus, too! I really enjoyed the experience.
My family had time to visit the Natural History Museum as well, eat some New York pizza, and walk around Central Park. All in all, a wonderful time.
Now back at home, I’m back to writing. Kane 2 will be finished this week and sent to my editor. I love it when I complete a manuscript! No definite title yet — that’s usually the very last thing that I do — but I’m sure an announcement will be forthcoming soon enough. The book will be published May 2011.
In other Kane Chronicles news, BookPeople will be sponsoring its first House of Life camp, based on the series, next summer! As you may know, BookPeople’s Camp Half-Blood is wildly popular and always sells out immediately, so I expect the Kane camp will be every bit as cool. Check out their website!
I hope to see some of you on the road in October. All the tour details for The Lost Hero are now available on my calendar. Until then, happy reading!