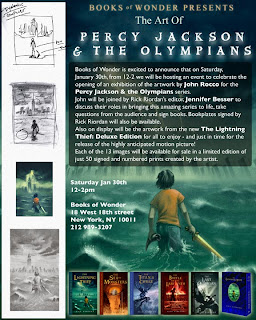 An awesome event is coming January 30 to Books of Wonder in New York. John Rocco, who created the cover art for the Percy Jackson books, will have an exhibit of art showing how each of the covers was created. He’ll also have color plates of the illustrations from the deluxe edition of the Lightning Thief, and if you haven’t seen them, they are beautiful! A limited number of signed prints will be for sale, if you want to get a piece of Percy Jackson history. John Rocco really helped put Percy on the map by giving us a stunning look for the series.

My editor Jennifer Besser will also be on hand to answer questions about the series. Who knows — she might even give a few hints about what’s coming next. It’s safe to say that without Jennifer, Percy Jackson never would have taken off. She’s been with me from the very beginning of the series, and played a huge role in shaping the books. She was one of Percy’s first champions — a hero’s hero! — and can give you an insider’s view of Percy’s world.
I wish I could attend the event myself, but I’m in lockdown mode working on the new Camp Half-Blood series, so I won’t be doing any travel over the next few months. If you’re in the New York area, though, stop by Books of Wonder. It’ll be a truly unique chance to go behind the scenes and ask questions of the team who brought Percy Jackson to life.