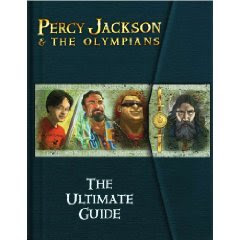 Sitting proudly on my desk is a hot-off-the-presses copy of Percy Jackson & the Olympians: The Ultimate Guide. It’s a cool companion book for the series, which will be published in only a few weeks: Jan. 18.

Since I’ve been getting a lot of questions about this book, I thought I’d give you a sneak peek, since I don’t want people confused about what they’re getting.
What it isn’t: It is not a Percy Jackson novel, nor is it a collection of short stories like the Demigod Files. I don’t want people buying it with that impression and being disappointed!
What it is: A full-color compendium of Percy Jackson’s world. It comes in a flip-book format with a closing magnetic clasp, and a cover page with a cool band of holographic images that change as you move the book. Inside are 148 pages of Percy Jackson facts, trivia, and illustrations. There are also mini trading cards for important characters in the series. The book has sections on Percy Jackson’s background, life at Camp Half-Blood, gods & spirits, a Greek mythology bestiary, and a storehouse of the gods featuring all the magic items and weapons found in the series.
My favorite sections are probably Nico di Angelo’s guide to the Underworld and the section exploring Daedalus’s Labyrinth. You’ll find many new color illustrations, including a portrait of the camp, a map of its layout, and a look inside Daedalus’ workshop. Ever wanted to know what a dracaena looks like, or the Manticore, or a Laestrygonian giant playing dodgeball-of-death? The Ultimate Guide has pictures of all these and more.
To tell the truth, I’ve found the Ultimate Guide very helpful myself, as I’m in the midst of writing the first book in the new Camp Half-Blood series. The guide has helped me keep things straight about who had what magic item, which monster appeared in which book, and how the gods and spirits were interconnected.
So if that sounds worth checking out to you, give The Ultimate Guide a look! And coming soon, as promised, a little more information about The Kane Chronicles: The Red Pyramid which *is* a full-length adventure novel and will be released May 4.
Now I’m off to write more about our friends at Camp Half-Blood. When I last left them, they were in a pretty dangerous spot — ah, but more on that later.