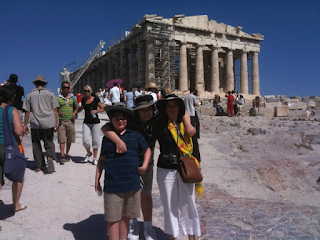 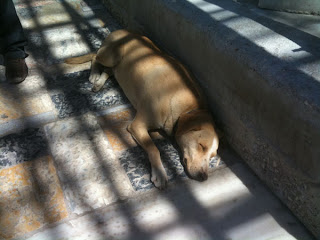 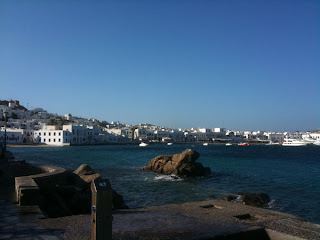 Athens was baking hot when we arrived, but our guide assured us it was worse the day before. They’d hit 110 degrees Fahrenheit. My editor Jennifer Besser greeted us at the hotel and we met up with Julia and her family. Very nice people! We had a fun afternoon together exploring the city. We saw the changing of the guard in the front of the Greek parliament building, which reminded me of Monty Python’s Ministry of Silly Walks. Then we strolled through the Plaka, the old area of Athens, down Ermu Street (otherwise known as Hermes Street). As you might expect from the god of commerce, the street was full of shops, but our guide reminded us that Hermes was also the patron of thieves, so I kept my wallet close.

Finally, the high point of the day, literally: We climbed the hill of the Acropolis. You can see some pictures above. The site is truly awe-inspiring, as the Athenians meant it to be. Along the way we came across this poor dog sleeping in the shade. Our guide told us Athens is full of stray dogs. The city tags them and feeds them, but they are allowed to die when they get old. Sad there are so many. This one looked like it was about to expire, but when we saw it again on our way down it was awake and looking much better. We’re told that some of the dogs have even learned to ride the Metro to find the parts of the city with the best handout scraps.

During our tour, we saw the theater of Dionysus, then climbed to the top and saw the Parthenon. I learned that the building was designed with no right angles. It looks nice and square, but the lines are all slightly curved to make the building look larger and more impressive. It works! To one side of the Parthenon was the Arachtheon, the holiest site, where according to mythology Poseidon and Athena faced off in a contest to become the patron of Athens. An olive tree still grows at the spot where Athena created the first olive tree, and inside the building are three marks representing the trident points of Poseidon. The view from the Acropolis is amazing – you can see all of Athens and the surrounding islands.

Julia’s family had several more days to spend in Athens, so we said our goodbyes and got back on the ship.

We arrived in Mykonos today. We were hoping to visit the ruins of Delos, but the winds are so strong they aren’t running the ferry. We got to walk into town, however, which is exactly what you imagine in a Greek village – blazing white stucco buildings with blue doors and windows, crooked cobblestone streets, domed churches, and lots of boats in the harbors. We had ice cream in the plaza and met the town’s mascot, Petros the pelican. We don’t know which one was Petros, actually, since we met two pelicans, but the boys pronounced this the coolest part of our trip so far. We followed the pelicans for a few blocks, and they obviously have the run of the town, as they walked straight into a tavern and the locals didn’t even lift an eyebrow.
Tonight, we sail for Katakolon, the site of ancient Olympia and the first Olympic games. Then it’s back to Venice for the long trip home. What an amazing time in the Land of the Gods. After writing about Greek mythology for so many years, it’s been incredible to literally return to the source. I’ll update you further on the homeward leg of our trip.