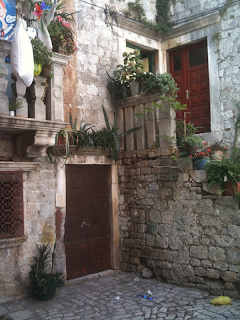 We stopped at Split, Croatia on our way down the Adriatic coast. I had no idea what to expect, but it was a fun experience. Patrick was feeling under the weather, so Becky stayed with him while Haley and I explored the country. Our tour first stopped at the Roman ruins of Salona, where we saw crypts, houses and city walls from the early to late Roman Empire. You can see a photo of Haley with the Dionysus drinking fountain above, along with a shot of the ruins. Our guide told us only 30% of the ancient city has been excavated so far. Every time they build a road, they unearth more artifacts. Salona was once the capital of the province of Dalmatia, and the hometown of emperor Diocletian, so it was an important place, with a population of 60,000 – huge for the Classical world.

Our bus then took us to the medieval town of Trogir, which sits on an island in the middle of a river, and has winding streets, a mix of ancient architecture, and some incredible stone carvings. Apparently, it had a famous stone carving school in the Middle Ages. Above you can see a street in Trogir. Haley and I had lunch at a café on the riverbank before heading back to the ship.
The next day we sailed for Corfu, our first stop in the Greek isles. It reminded me a lot of California, actually – same golden hills and flowering plants, same general climate. We spent a morning at the beach, and it was freezing cold. Patrick braved the water, but I would only go up to my waist. The swimming pool was great, though.

Next, we sailed for Athens, where we’d meet the winner of the mythology bee, Julia, and her family. More on that next . . .