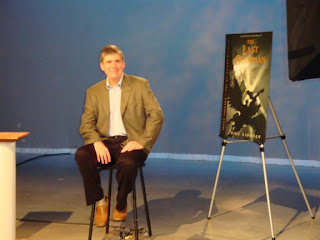 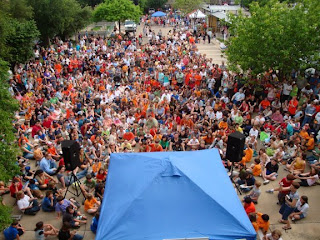 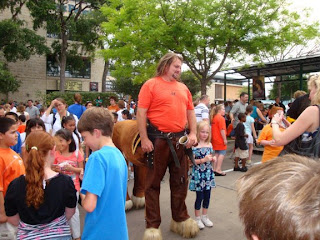 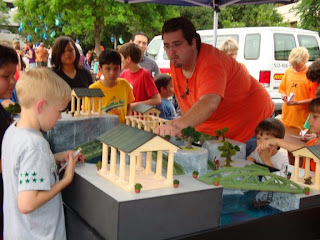 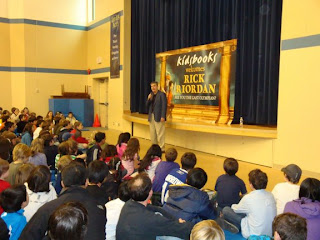 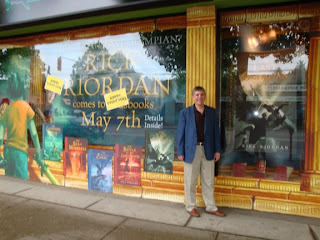 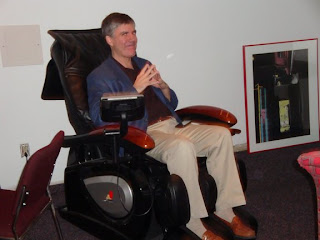 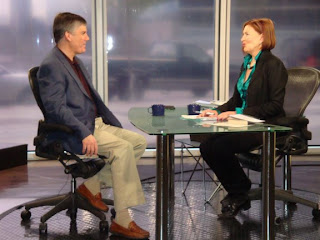 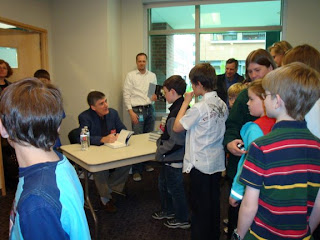 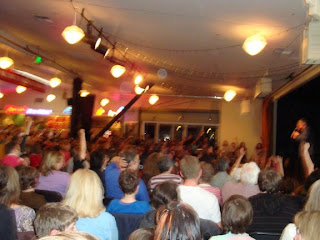 Thanks to Deborah, my publicist, for making these photos available. At the top: me in the KLRN studio, San Antonio, on pub day. We did a satellite tour from the studio, and I talked to eighteen different radio and television shows across the country. I was tired afterward!

Next, you can see another shot of the crowd at BookPeople. Under that, we have Larry the centaur and Tommy leading a game of Mythomagic.

Picture five shows the crowd in Vancouver, and below that is me standing outside the amazing storefront display at Kidsbooks. The picture of me in the massage chair — they had that thing in the green room for the local noon television news program. That’s me doing my Dr. Evil impersonation, plotting to take over the world. Under that, me on Studio 4’s morning show in Vancouver.

Last two pictures: You see me doing a signing at Amazon Headquarters, and you can tell that the average age of the employees has suddenly gotten a lot younger! Finally, a picture to give you a sense of the enormous crowd at Third Place Books in Seattle.

The Last Olympian has been out exactly one week, and the response has been tremendous. I am so gratified to hear that you guys have enjoyed the end of Percy’s saga.

As I’ve been announcing on tour however, the end is not really the end. When you read the conclusion of The Last Olympian, you will probably get that sense. The more I write about Camp Half-Blood, the more I realize how much there is to tell — gods and monsters I’ve never discussed, the life at camp (which Percy hardly ever gets to experience) and so many other characters who don’t get their moment in the spotlight. In late 2010, I will be launching the second Camp Half-Blood series. I’ve already gotten a flood of emails from fans pleading for details, but I can’t tell you much yet. It will feature a new generation of demigods, ready to take on a new prophecy. You may see Percy, Annabeth and the rest of the gang from the first series, but they will not be the main characters. Again, read the ending of the Last Olympian and you will get some clues what I mean. I’m afraid the rest of the details are secret for now — no character names, no titles, no hints. Sorry! I will probably post more on my website in the fall.

*And* I’ve got another non-Greek-mythology project in the works for spring 2010, but more on that later… If you attend an event, you will get the inside scoop on it.

Today, I’m off the New Jersey, the land of Medusa! I hope to see some of you tonight at the event hosted by Clinton Bookshop.