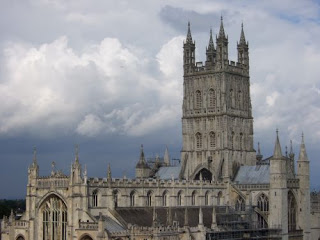 It’s Friday evening and I’m sitting in the Malmaison Hotel, Reading, waiting for my last event of the UK tour.

The last two days have been really good. Thursday, we drove from Cheltenham to Gloucester for an event at King’s Junior School. It was a smaller crowd of years 5 and 6, but they were very excited and I signed lots of books. Gloucester has a beautiful cathedral (see above). The spires can be seen from the school. I’m told that large parts of the second Harry Potter movie were filmed at the Gloucester Cathedral. It definitely has a Hogwart’s feel to it.

From Gloucester we drove to Worcester and had lunch at the Oak Apple pub – a true slice of British life I doubt many tourists ever see. The pub advertised 24-hour curry, but I played it safe and ordered the fish and chips again. After lunch, we walked to Nunnery Wood Primary School. Of course it rained again, so I arrived soaked for my event. Two classes of students crammed into a classroom and we had a very nice (very cozy) assembly!

This morning we drove to Alexandra House, a conference center outside Swindon, where I addressed a teachers’ conference. Some students were also there from Swindon Primary, and they’d prepared lots of great questions. My favorite: “Being a writer is like being a god because you can create a world. Is it hard giving up control when your book is made into a movie?” Very intriguing idea. I would say, however, that this “god” is only good at creating books, and if I tried to make a movie, I would royally mess it up, so I’m happy leaving that to others! The students were all great, and I enjoyed meeting so many teachers. Many of the concerns they talked to me about are the same things we struggle with in the States – engaging reluctant readers, getting boys to read, helping kids with learning differences, and trying to teach under the pressure of all-important high stakes tests.

After the conference, I did one last school visit at Highworth Warneford School. As it turned out, the school was having an out-of-uniform day, and the librarian is an American from Indiana, so I felt like I was walking into an American school. Very disorienting, but once again the kids were a fabulous audience. The school has a wonderful view of the surrounding countryside, and is very close to the White Horse of Uffington, a Bronze Age carving in the side of a hill. We took the train to Reading, where I am now waiting for an evening event at the Abbey School. I understand Jane Austen attended school there! Tonight it’s back to London, followed by some stock signings on Saturday, and finally home on Sunday. Phew! It will be great to be back in Texas after two weeks away.