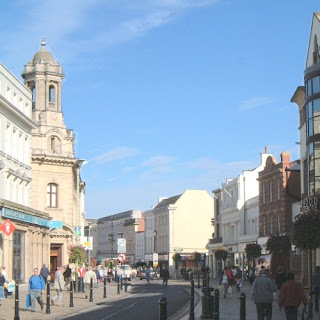 Monday was a gorgeous day in the London area. In the morning I took the train to Redhill with Louise from Puffin Books. Terry from Bookworms met us at the station and took us to Redgate Priory School. The students were very enthusiastic. I signed many Percy Jackson books and quite a few autograph books as well. Turns out the assistant head at the school had just returned from several years working as a guide in the Florida Everglades, and as I had just visited Florida, we chatted about that state. Small world.

Terry, Louise and I had lunch at a local pub and I got my obligatory serving of fish and chips. Eating fish and chips, strangely, reminds me of my childhood in Texas. That’s because my mom, who was raised partly in England, used to search out fish and chips shops in San Antonio when I was young. It’s odd sitting in an English pub, taking a bite of fish and chips, and getting nostalgic for San Antonio, but there you go.
In the afternoon we visited the Hawthorne Preparatory School – another good audience. The old Jacobean building was under construction, so I couldn’t admire the façade, but the interior was everything an ancient English school should be – dark portraits above the wood-paneled fireplace, uneven floors, narrow hallways. The students had just finished filling shoeboxes for Operation Christmas, so the place was piled with boxes and decorations.

That evening we had a nice dinner with booksellers and Puffin staff at the Charlotte Hotel. Special thanks to John and Vivian from Newham Books, who brought me a review by Robbie, age 11 – one of their patrons. Robbie had bicycled over to the store to deliver the review and his books for signing, and although I didn’t get to meet him in person, his glowing review meant a lot to me! Congratulations to Tamara and Georgina from Tales on Moon Lane. The store won an award for independent bookseller of the year. I got to visit their Herne Hill location last May, and I can certainly see why they won the award.

Tuesday the weather became cold and rainy again, but I will enjoy it while I can before heading back to steamy Texas. Tania from Puffin Books met me at Ravenscourt Primary in north London. The school was buzzing with activity, so I felt like one act in a three-ring circus, but the students were great. Thanks to Chantel from Waterstones for handling the book sales.

From there, Tania and I headed south of the Thames to Dulwich, a quiet and pretty neighborhood. We had lunch at the Dulwich Picture Gallery and checked out the art. As Tania said, we have now seen enough portraits to last a lifetime. The gallery had a special exhibition called “What Are You Like” featuring artwork by famous people, describing their interests. I must admit I didn’t know most of the British celebrities, but I did find Phillip Pullman’s picture. Apparently, Mr. Pullman’s favorite food is toast and dripping, which I’m told means the fat drippings from a meal. To each his own, I suppose. Shudder.

We had an afternoon presentation for the boys at Dulwich College – beautiful school, very receptive audience. We then headed back to the Puffin offices on the Strand for a meet and greet with the staff.

I was about ready to collapse at that point, but there was more to come. We took the train to Bishop Stortford College in Hertfordshire for an evening presentation. I’m always a little nervous about public events in the UK, because I’m not as well known here as in the States, but I needn’t have worried. Rosie the school librarian had done an amazing job getting the local kids excited about the event, and we had a full house.
I made it back to London very late that night and collapsed at the Waldorf, tired but very pleased with the day’s events.

Yesterday, Wednesday, was my busiest travel day so far. I met Reetu Kabra from Puffin at Euston Station (yes, in case you’re wondering, I stole Reetu’s surname for the Kabra siblings in 39 Clues). Fortified with much coffee, I boarded the train for Manchester. Our first event was at Bury Grammar School for year seven boys. They had also invited year seven girls from a neighboring school, so it was an interesting audience – boys on one side, girls on the other. I felt very schizophrenic by the end of the speech! We then took a long cab ride in a taxi that smelled like an ashtray (not recommended) to Bramhall, south of Manchester. Our hosts, Sue and Andrew from Simply Books, made us very welcome in their store. Sue took us to an event at Lady Barn House School in Cheadle. The English rain was pouring down, so I arrived for the visit completely soaked, but the students were a fabulous bunch and their enthusiasm more than made up for the weather. We had an afterschool public signing at Simply Books. Again, I wasn’t really expecting anyone to show up, but we had a constant stream of fans and I found myself signing books for the entire hour.

I certainly have noticed a change since I was here in May. More young readers are aware of the series. More fans show up at events, often with all four books in hand. Many people say they just found out about the series in the last six months, which is about when Puffin issued the new covers. Whoever said ‘don’t judge a book by its cover’ clearly knew nothing about books. Everyone judges books by the covers, and apparently the new look has made a huge difference. Whatever the reason, Percy Jackson seems to be building steam in the UK, and I couldn’t be happier.

Now I’m at the Hotel du Vin in Cheltenham. Today we’re off to events in Gloucester and Worcester. I’ll let you know how it goes!