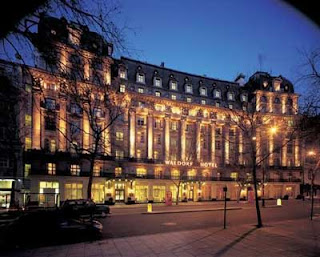 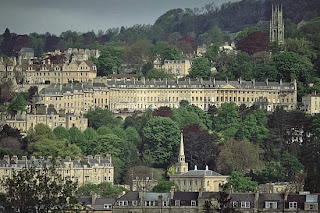 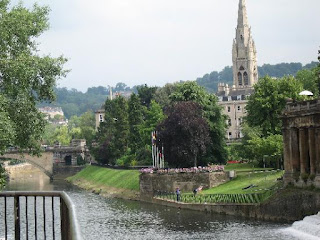 I’m writing from the Waldorf Hotel in London on a sunny afternoon.

Yesterday I arrived at Heathrow and took a car service to Bath. I hadn’t been to the city in several years, but it was just as beautiful as I recall (see above) — green hills lined with golden Georgian buildings. The streets were bustling with the Children’s Literature Festival crowd and the usual tourist traffic. I hear Darth Vader and some storm troopers even put in an appearance at the festival, followed today by Spot and Bob the Builder. It’s a good thing those visits happened on separate days, as I imagine an epic battle between Bob and Darth, in which Bob gets turned to the dark side. Not a pretty thought.

At any rate, I slept off my jet lag last night and woke to a cold foggy morning (quite a change from Orlando). I walked from the Francis Hotel on Queen Square down to Caffe Nero for some coffee, then met Adele and Amanda from Puffin Books for my festival event at the Guildhall. We had a full house! I signed many books — British edition Percy Jacksons, but also quite a few 39 Clues and a fair number of American Percy Jackson editions. A lot of British fans told me they’d gotten books shipped from friends in the States because they couldn’t wait for the British versions. Fortunately that won’t be a problem for THE LAST OLYMPIAN, as it will come out in May in both the US and UK. Favorite question from the audience: “If I could be anyone in the movie version of Lightning Thief, who would I be?” Answer: Chiron, although a) the director would know better than to cast me in the movie, and b) even if he did, with my luck I’d end up playing Dionysus or Smelly Gabe. No thanks!

After my event, I caught the train back to London, which leaves me the afternoon free to explore the city. I’ll probably take a stroll through Charing Cross, as that’s one of my favorite parts of London. Tomorrow I’m off to the Redhill area for two school events, followed by dinner with the Puffin staff and booksellers. I’ll keep you posted!