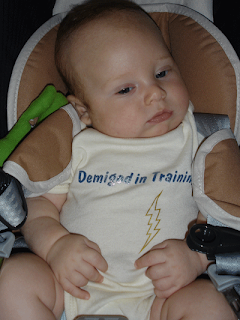 One of the highlights of my recent event at BookPeople was meeting Grey, son of Topher and Ceci! Topher, as you may know, is the mastermind behind Camp Half-Blood, Austin, and has been a friend and supporter since the early days of Percy Jackson. This summer, right after the last session of camp, Grey was born! He was six weeks old when I saw him at BookPeople, and was already big enough to wear the ‘demigod in training’ onesie Becky and I sent his proud parents. He totally looks strong enough to strangle snakes in his cradle the way Hercules did, but we won’t test that theory. Congrats, Topher and Ceci, and hooray for Grey, the youngest demigod of the week ever!