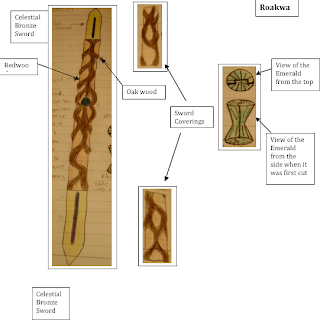 Thanks to Kinzi from Egypt for sending in her own demigod profile. Kinzi tells me she wants to be a writer, and it looks like she’s well on her way!

If I was a Demigod

by Kinzi: Heir to Artemis

How is this possible? Artemis has sworn that she would remain a maiden forever. However, Artemis thought that she would need an heir. This heir would be the leader of the Huntresses; her second in command. Artemis asked Athena how to do the brain- child thing and Athena gladly helped.

Kinzi grew up in an orphanage for her whole life until she was twelve. A satyr discovered that she was a demi- god while she was hiking threw the forest with her fellow orphans on a field trip. She was taken to Camp Half- Blood and was declared undetermined. She grew to know Percy Jackson, and watched him with curiosity as he saved the world.

Meanwhile, Artemis sensed that Kinzi was ready to become her second- in- command and journeyed to Camp Half- Blood to tell her who her parent was. Kinzi (and everyone else for that matter) was surprised when they found out that Artemis had a daughter. Artemis told Kinzi about why she existed and why she was the only daughter she had. She offered Kinzi the position of Leadership in the Huntress league, but Kinzi refused; she had been watching Percy, Annabeth, Grover and the others and dreamt of helping them to defeat the evil Titan Lord Kronos. Artemis was enraged but Kinzi held firm.

I am Kinzi. I am Artemis’ daughter, and I am the one who has to suffer at certain points in life because of that reason. That is my story, now I can show you what a daughter of Artemis can do.

Powers: I can turn into any animal I want. (I’m getting better and better at it each day. I can now make new animals of my own by mixing animal body parts and I can become mystic/ fictional animals too.) I also have the skills of a Huntress.

I have bark brown hair and the same color eyes as Artemis. (my eyes were made to look like a dear’s- long lashes and all that; but they can also make my emotions very apparent; it’s really annoying because then people can tell how I’m feeling) I’m pretty tall and athletic (I think) and I’ve got white skin.

I can use bow a bow pretty well, but my magical item is my staff- spear Roakwan. Roakwan turns into a sword or staff at will. The staff part can grow shorter or longer; same thing with the sword part. The Emerald in the middle dips in so that the user can put their finger in it and spin Roakwan around at a dangerous speed. This trait allows you to cut off many enemies’ heads at the same time. (You have to duck down to make sure yours doesn’t get chopped off too though) The Emerald also allows you to turn Roakwan into two separate swords; do this by pressing on the Emerald. The gems give Roakwan magical power which makes it strong and unbreakable. Roakwan can shrink to charm size so that you can attach it to a leather necklace or bracelet. If you want it to turn back into normal size then you must press on the Emerald. The Emerald is the key and magical source to everything that makes Roakwan what it is.