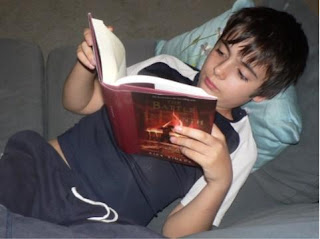 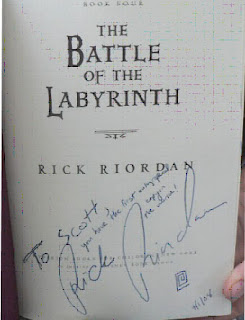 There’s a story behind this . . .
A month ago I was at the children’s book fair in Bologna, and my agent Nancy introduced me to a friend of hers, Frances, who is a literary agent from New Zealand. We talked for a while, and it turns out that Frances’s nine-year-old grandson Scott is a huge Percy Jackson fan. It also so happened that Nancy had one copy of Battle of the Labyrinth, which she’d been jealously guarding and showing to people during her meetings. It was toward the end of the conference, and Nancy said, “How would Scott like a copy?” Frances’s eyes got big, and she said that would be the coolest thing ever. Now, I know, a lot of you are screaming, “No fair!” And you’re totally right. But I liked the idea of the book going halfway around the world and making Scott’s day, even though I’ve never met him. So Scott got the first-ever signed copy of Battle of the Labyrinth in the world. Of course, to be accurate, my sons read the book first. They always do. But Scott was the first kid outside my family to get a copy.
Some of you may know that when I sign a copy, I usually draw a symbol below my signature (if I have time) — a lightning bolt for book one, a Cyclops eye for book two, the bow of Artemis for book three. I’m no artist, but you can see the symbol I’ve chosen for book four — a maze.
Yesterday, Scott sent me his review of the book, and so here it is below. (No spoilers, so don’t worry!) It seems fitting to me that the first review for the book be a kid’s opinion, before all the adults start weighing in, so Scott from New Zealand is our demigod of the week!

Percy Jackson & The Battle of the Labyrinth
reviewed by Scott, age 9, first ever reader

I was incredibly surprised when I got the first signed copy of Percy Jackson & The Battle of the Labyrinth in the world! I knew there was a fourth book coming out, but I never thought I would get it before it was released! Dad and I had checked out the trailer on Youtube, and when my Granny arrived home from Italy (where she had met Rick Riordan), I told her the fourth copy was coming out in May. I was in awe when she pulled the book out of her handbag! She told me it had been signed by the author and was the first signed copy in the world.

I had to read it straight away and finished it the next day. I have read it twice now.

I’ve always been interested in Greek mythology and when I discovered the Percy Jackson series, I thought the idea of monsters living invisibly amongst mortals was a great one.
My favourite part about this book is the surprises in the ending. If the next book starts where this one ends, it will be the most exciting of all the books.

Thank you, Rick Riordan, your books are as good as, and sometimes better than J.K. Rowling’s!