Greetings from Athena House, the Riordan family headquarters in Boston. 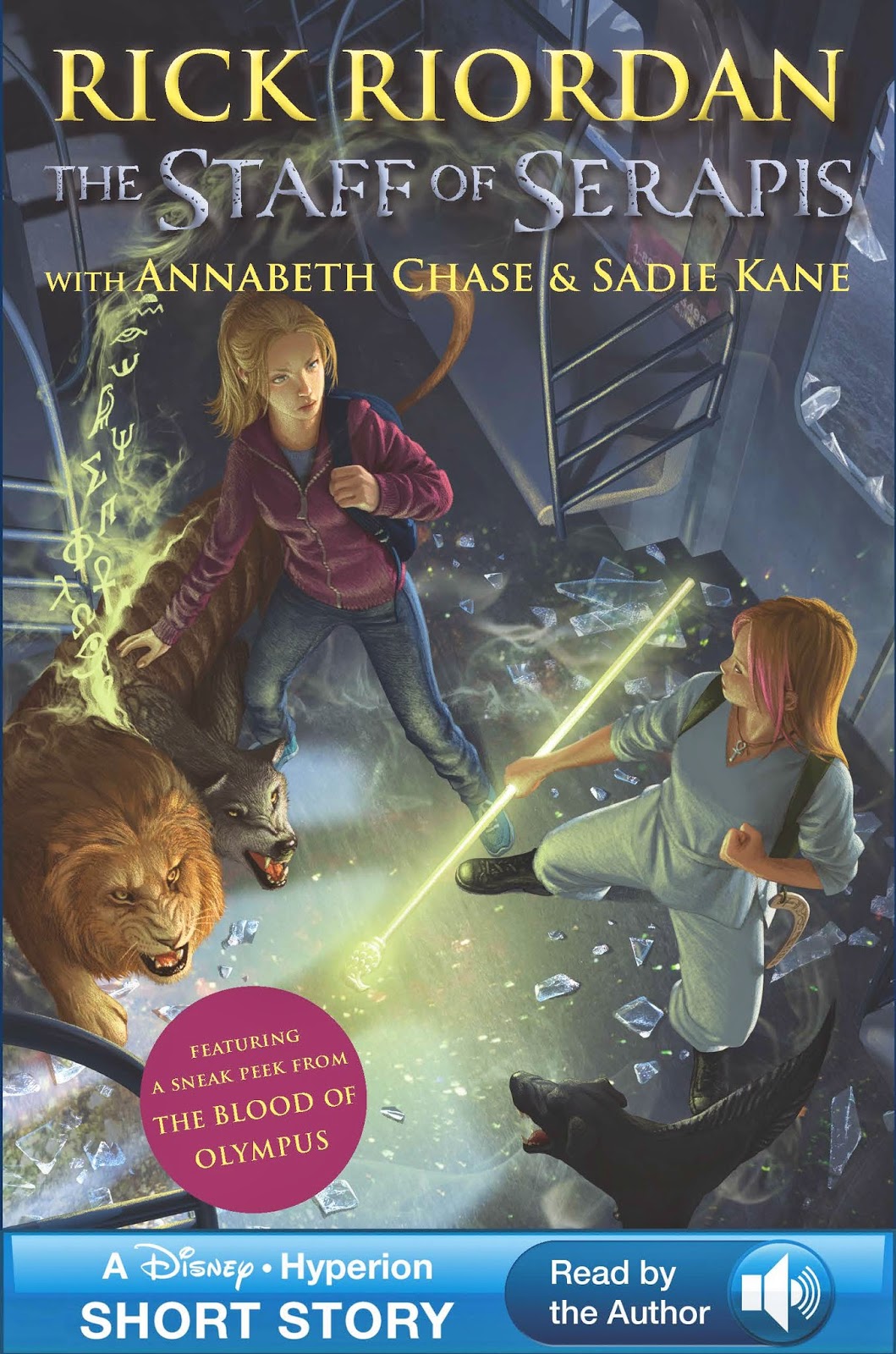 First, the Annabeth Chase/Sadie Kane crossover short story “The Staff of Serapis” is celebrating three weeks on the New York Times chapter book bestseller list. Not bad for an e-single! Thanks to my readers for all the great feedback. I’m glad you’ve enjoyed the story! If you haven’t picked it up yet (virtually speaking) the version with the audible bundle features me narrating. In either version, you’ll also get the first sneak peek chapter of The Blood of Olympus!

The Blood of Olympus is going through its final copy editing and typesetting, then it’s off to the printers. It will be published as scheduled on October 7 in the U.S. and U.K. markets. No information yet on when it will appear in other countries. When in doubt, ask a bookseller in your area. And, no, absolutely no chance it will be published earlier. Proofing, printing, shipping, and distributing several million copies takes a long time.

What can I tell you about the book? It’s roughly the same length as all the other volumes in Heroes of Olympus. Also, don’t believe Internet rumors. It’s very easy for trolls on social media (besides me) to create fake tweets or claim they have “confirmed information,” but I have released no spoilers about what happens to any of the characters, and I won’t release any.  You’ll just have to wait and see what happens. There will be no cliffhangers, meaning no one will be left in imminent danger with no clear way out. But that does not mean you will know every single thing that happens to all the characters for the rest of their lives. I don’t do epilogues. I hate epilogues. It’s like nailing the coffin shut on the story, allowing for no further growth and leaving no room for the readers’ imaginations. Does that mean there could be other stories about demigods down the road? It’s too soon to say, but Blood of Olympus will definitely bring closure to the Heroes of Olympus story arc. I hope you’ll enjoy the conclusion!

One thing I will say: I am now starting work on my long-awaited Norse mythology series, the first volume of which will be out in fall 2015, and you will find out the title of the first book (and some hints about the main character) at the end of The Blood of Olympus. Raise your drinking horns to Odin!

A five-volume hardcover boxed set for the Heroes of Olympus should be available at the same time as The Blood of Olympus. I’ll post more details about that when I get them. 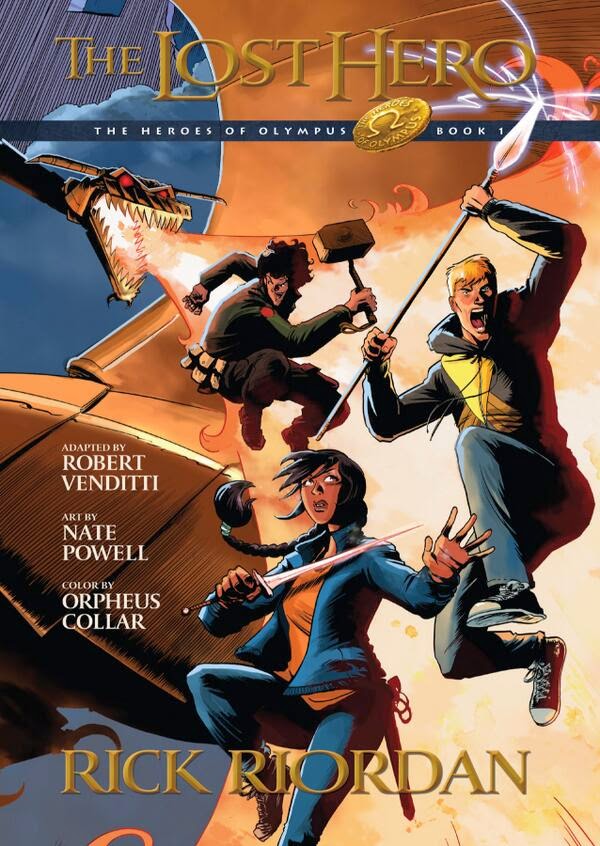 The Lost Hero graphic novel! It looks awesome. And, no, that is not the hammer of Thor in Leo’s hands. Sometimes a hammer is just a hammer, guys. On Twitter, artist Nate Powell posted a look inside the book to whet your appetite: 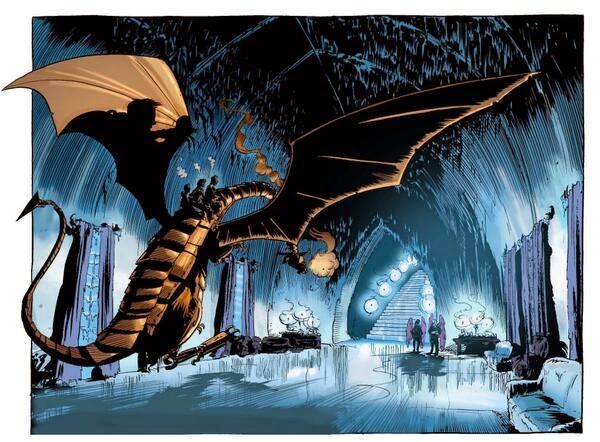 And even before October 7, we have the release of Percy Jackson’s Greek Gods on August 19, a day after Percy’s birthday!

I just got my advance copy of the book, and it is beautiful! 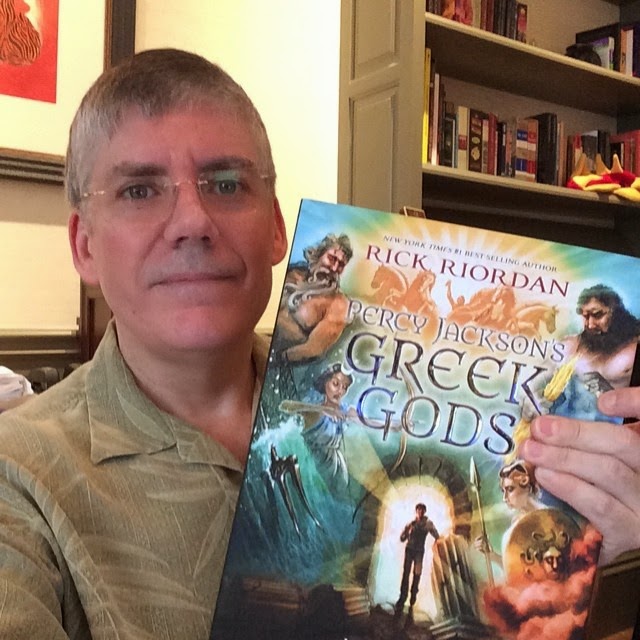 As you can tell, this is also HUGE — a gorgeous coffee-table-sized volume full of color pictures from John Rocco. Percy Jackson narrates chapters on all the major Olympian gods, giving you the low-down in his own snarky way. Here’s a peek inside: 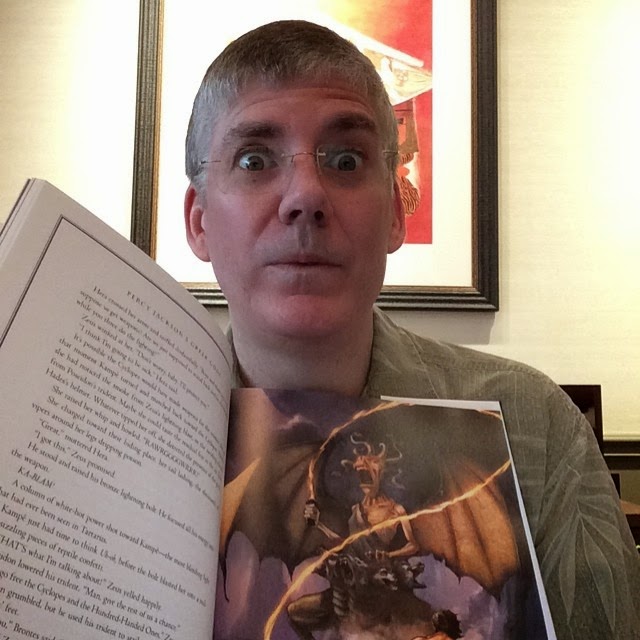 Also, the silly chapter titles are back, like: Zeus Kills Everyone, Demeter Turns Into Grainzilla, and Hephaestus Makes Me a Golden Llama (Not Really, But He Totally Should). All this and more awaits you in Percy Jackson’s Greek Gods.

Other things going on: I am presently writing the third crossover story in the Kane/Percy Jackson saga, in which Percy, Sadie, Carter and Annabeth finally team up all together. This will be told from Percy’s point of view, a la the ‘old school’ Percy Jackson novels. I’m having a lot of fun with it. I’ll get you more info — the title, the publication date — as soon as it’s all confirmed.

I will be doing a nine-city North American tour for The Blood of Olympus starting on Oct. 7. I should be able to announce the locations soon. Stay tuned. For international fans, sorry, as always. I just don’t have time to do tours in other countries and keep up with my deadlines. It’s more important to me that I get the next book to you on time, and make it as good as possible!

If you haven’t checked them out yet, the Percy Jackson paperback boxed set with the new covers is now available, with a free poster inside! 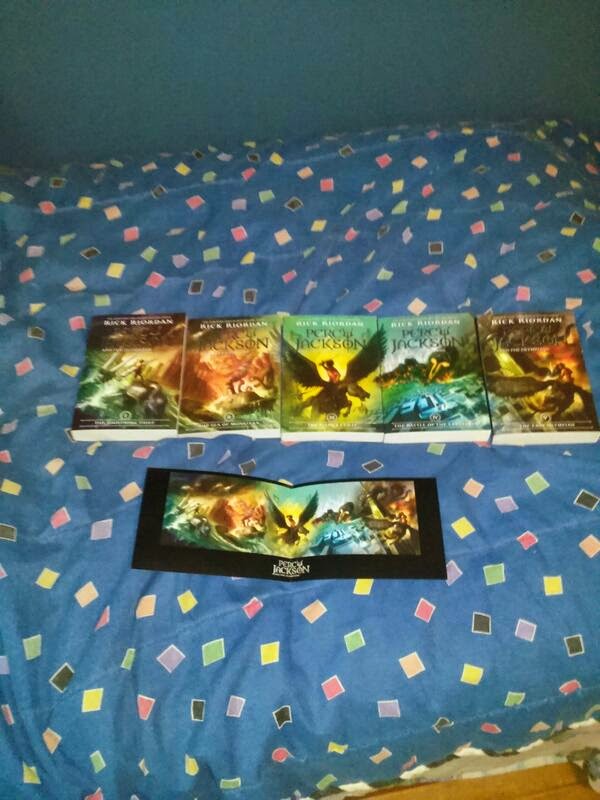 (Picture credit to Wes, who tweeted the boxed set his brother bought for him.)

No word yet on when/if the hardcover boxed set will get a new cover treatment, but for now, it’s kind of nice you can still get the hardcovers with the original art, so you have a choice! Me, I love both the old and the new.

Phew! I think that’s all the news for now. Stay tuned to my Twitter, Tumblr, or Instagram feeds for all the latest.