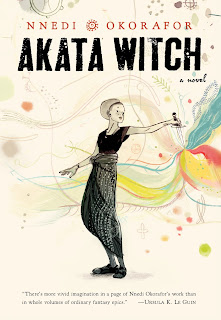 I spent the weekend with a great book: Akata Witch by Nnedi Okorafor. As you can guess, I’m a sucker for all kinds of mythology, and this middle grade/YA fantasy is steeped in the myth and magic of Nigeria.
Our main character is Sunny, a twelve-year-old girl born in the U.S. but recently moved to her parents’ homeland of Nigeria. Sunny stands out in more ways than one – she’s albino, she’s a prodigy at soccer, and she’s teased at school for being an akata(literally a ‘wild animal’) because she is from America. Sunny also has to deal with her family’s complicated past. Her grandmother, whom Sunny never met, was a mysterious figure that Sunny’s mother refuses to talk about, and Sunny’s parents aren’t exactly clear about why they decided to move Sunny back to Nigeria.
Then one night during a blackout, Sunny stares into a candle’s flame and sees a horrifying vision of the end of the world. This is the first sign that Sunny is not like other kids. Her powers have begun to awaken.
Soon, Sunny makes three new friends who introduce her to the secret world of magic. There is Orlu, her classmate, a kind-hearted boy who has a natural talent for undoing juju spells. There is Chichi, a girl with a smart mouth and a quick wit, who doesn’t go to school and lives in a tiny hut with her strange mother and hundreds of books. Then there is Sasha, an African American boy from Chicago, who was sent to Nigeria for corrective education after terrorizing his classmates back home with an evil spirit – a masquerade.
Sunny learns that she is one of the Leopard People, a subset of humans who have strong links to the spirit world. The Leopards (as opposed to the Lambs, regular people) have their own society, with centers of juju learning throughout the world. In Nigeria, their town is called Leopard Knocks, and can only be reached by crossing an invisible bridge over a magical river.
As Sunny begins to master her own powers, she realizes the world is a much more incredible and dangerous place than she imagined. Even the simplest lesson – like visiting a teacher’s house in a forest – could be fatal – and Sunny quickly realizes that she and her three friends are being trained to work as a team for a vital mission. A serial killer is on the loose: Black Hat Otokoto, who is stealing and killing children, often removing their eyes in the process. If that’s not creepy enough, Black Hat is secretly a powerful magician working the most evil kind of juju with human sacrifices. If Sunny and her friends can’t stop him, Sunny’s apocalyptic vision will come true. Can four young Leopard People master enough magic and learn to work together to stop a killer? The answer is by no means certain.
The book’s premise may sound familiar – a secret society of magic practitioners in the modern world, a group of friends who must master their powers to stop a terrible evil sorcerer. But don’t make the mistake of thinking that Leopard People vs. Lambs is just a takeoff on Wizards vs. Muggles, or Demigods vs. Mortals, or any number of other fantasies in which the heroes find they are special and magical. Sure, Akata Witch has some structural similarities (I particularly loved the fact that ADHD and dyslexia may be signs that you are a Leopard Person – great minds think alike, etc.) but Okorafor’s book is firmly rooted in West African myth, which opens up a world as wondrous as Hogwarts but as different as pepper soup is from tea and crumpets.
There are too many wonders in this book to describe them all: an artist wasp that builds sculptures out of crumbs and will sting you unless you praise its skill; a juju-powered bus called the funky train, driven by a fast-cussing man named Jesus’s General; a sorceress who lives in a hut at the top of a palm tree; juju knives that can cut pockets out of the air, summon music or carve force fields; and horrible spirits called masquerades, who appear from termite mounds and wield powers so terrible they will kill you or drive you insane if not summoned properly.
In the world of Leopard People, money is called chittim, and can only be gained by learning. Whenever you cast a new spell or find out something important about your powers, magic money literally falls from the sky – copper the most valuable, gold the least valuable. Any video game fan will appreciate the idea of coins appearing when you defeat an enemy, and personally I felt like chittim fell at my feet whenever I learned about a new monster, spirit or god from Nigerian myth – which happened a lot.
I used to teach a unit on African folklore in my classroom, but it’s such a huge subject I never really got to do it justice. We would read the animal fables of the Ashanti from Ghana and learn the adinkra symbols. We would read Yoruba myths from Nigeria and learn about the ancient gold-rich kingdoms. We would eventually work our way down to the DR Congo and I would tell the heroic epic of Mwindo from the Nyanga people (Nkuba the lightning hedgehog – best character ever). Still, there are so many cultures in West Africa alone, one could spend a whole year learning stories of gods and heroes and only scratch the surface.
If you’re tiring of knights, dragons and Merlin-type wizards and are interested in exploring a fresh and different world of magic, try Akata Witch. It’s jam-packed with mythological wonders. Because it is so rich and so different from standard Euro-fantasy fare, some readers may take a little time getting oriented and keeping all the details straight, but it’s well worth the journey. Best of all, the book hints at future adventures for Sunny and her friends. I can’t wait to read more!