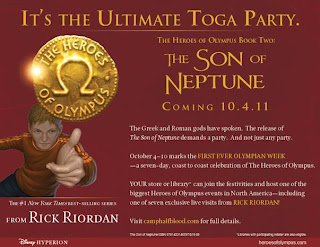 The news broke this morning in USA Today: the seven locations I’ll be visiting for The Son of Neptune have been announced! I understand that Disney-Hyperion got hundreds of amazing submissions from bookstores around the country, but alas, I can only go to seven places. Those seven, however, will have quite a party. And the winners are:

Now I always have to be clear so people won’t get mad at me: I don’t choose the locations! A committee at Disney-Hyperion does that, and I don’t get the news until the tour is all decided. That’s because I have so many favorite cities and bookstores, it would break my heart to say no to any of them. But on the other hand, I can’t be touring for more than seven days or the next Heroes of Olympus book won’t get written on time, so my publisher makes the hard choices. Runners-up in the contest will receive exclusive event party packages, however, so their work is not in vain! Thank you to everyone who submitted a proposal. You are all fantastic!

Some cool things about the tour: there are several new cities and bookstores in the mix. I’ve never been to Olympia, Washington before, and I just read that Orca Books plans to have me arrive by yacht. Cool! It’s been a long, long time since I’ve done a Southern California event. Hopefully that Grecian chariot I’ll be riding in Mission Viejo doesn’t get tied up in Orange County traffic. I’ve never done an event in Columbia, South Carolina, but I’ll be arriving there in Hades’s chariot, drawn by three black horses. Sweet! Do I get a Stygian iron sword? Also new to me: Burlington, Mass. — always happy to go to Massachusetts, and Penguin Books in Pittsburgh. You’ve got penguins? Don’t tell Felix from the Kane Chronicles. He’ll be there in a heartbeat. I get to go back to Toronto to visit my Canadian fans — hooray! And of course BookPeople in Austin — ah, it really wouldn’t be a Percy Jackson tour without my old friends and stalwart supporters at BookPeople. I can’t wait to see their Roman legion doing their drills. Awesome stuff.

Also announced today in Disney’s press release: the first printing of The Son of Neptune will be three million copies. I am resisting the urge to put my pinky finger next to my mouth and do a Dr. Evil impersonation: “One billion copies! Bwah, ha, ha!” That’s a lot of books.
Disney also estimates there are presently thirty million copies of my books in print in the U.S. alone. Let me check . . . yes, that’s also a lot of books. Thank you, readers! Your support and enthusiasm for the three series made it happen.

Keep checking heroesofolympus.com, as Disney will be revealing character art and more cool goodies in the coming weeks. Hope to see some of you at an event in October, and more importantly, I hope you enjoy the new book!