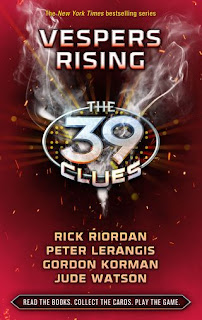 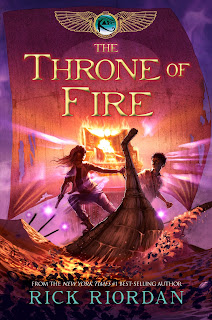 April is here already? Gods of Olympus! Time has been flying. That tends to happen when I’m buried in a manuscript.

I’ve been working furiously on the revisions for The Son of Neptune. I’m through the third draft, which means it’s down to just a little fine-tuning before I send it to my editor. Again, it’s a long process getting a book published, so this doesn’t mean the book is finished early or ready to read. It has to go through several more drafts with my editor and copyeditor, then typesetting, et cetera, et cetera. But I’m confident the book will be out on time this October. When I have more details about the cover, sneak peeks, and all of that, I will let you know, but it will be a few more months.

In the meantime, 39 Clues: Vespers Rising comes out Tuesday, April 5! It’s a book written in four parts, following the Cahill family from their origins to the present, and introducing a sinister new enemy family: the Vespers. I got to write the first part, going back in time to the incident that made the Cahills so powerful. 39 Clues veterans Gordon Korman, Jude Watson and Peter Lerangis wrote the other three parts, and as you might expect, they’re awesome. I hope you all like the book!

In one month, on May 3, the Kanes are back in town! The Throne of Fire, second volume of the Kane Chronicles, will be released, and I’m very excited about it. I just got a copy of the book, hot off the presses, and it looks fabulous. The Egyptian gods section of my website has been updated to give you a taste of things to come, and if you haven’t yet read chapter one, you can get that sneak peek on the Disney Kane Chronicles site. More information will be coming your way over the next month, so stay tuned!

If you’re new to the blog, you may be wondering why I call our house ‘Zeus House’. When we moved in, almost two years ago, we picked a stormy green/gray paint for the exterior that was appropriately named ‘Zeus.’ Since then, we’ve also added white countertops in our bathroom that are ‘Zeus white.’ So yeah . . . we’ve got a theme going. We haven’t been hit by lightning yet, so I guess Zeus doesn’t mind. Of course right now in San Antonio everything is covered in yellow oak pollen, which is pretty gross. We need a good rain!

In other news, I just saw the first sketches for The Red Pyramid graphic novel, and it’s going to be amazing. The Sea of Monsters graphic novel is also going really well. Wait until you see Tyson in comic form. Ha! I’ll keep you posted on those as the release dates get closer. The Percy Jackson series continues chugging along on the bestseller list – 194 weeks now, which is just mind-boggling. The Lost Hero and the Red Pyramid are still fixtures on the chapter book list, as well. Thank you, readers, for recommending the books. Like I always say, I’ve got the best readers in the world. Sorry I can’t be more open to individual communications right now, but as you can guess, writing two series at once is really keeping my nose to the grindstone.

Speaking of which, I’d better get back to it. Have a good week, everyone!