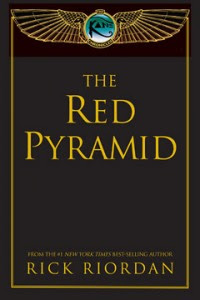 The news broke in Entertainment Weekly this weekend, and I announced it live at the Texas Book Festival on Saturday: my Egyptian mythology series will be called the Kane Chronicles, and the first book’s title is The Red Pyramid. The series follows brother and sister Carter and Sadie Kane, who accidentally help unleash the Egyptian gods into the modern world, and then discover they are the only ones who can set things right. I read the first page at the Texas Book Festival, and the response was incredible! I can’t wait to share more with you. The book will be released on May 4, 2010. What you see above is not the actual cover of the book. John Rocco, who designed the Percy book cover art, is hard at work on an amazing cover, but more on that will be revealed later. For now, it remains secret. What Egyptian gods will you meet? What powers do Carter and Sadie have that will allow them to combat immortal gods? You’ll have to stay tuned to find out!

Texas Book Festival was great fun, as usual. I had the pleasure of sharing a stage with Peter Lerangis, fellow 39 Clues author, who gave a hilarious Powerpoint presentation. Thanks to all the kids and parents who attended and shared part of Halloween with us. And speaking of 39 Clues, today I will be participating in a live webcast with four of my fellow authors and Whoopi Goldberg. I hear that thousands of classrooms have already RSVPed to tune in. Hope you can join us!