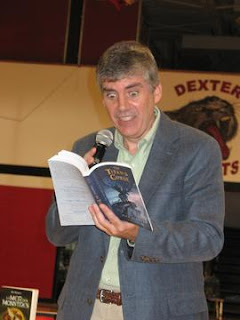 The picture shows me reading in Dexter, MO. The caption might be: “Ye gods, who wrote this sentence??”

I spent this week in the heartland – southeastern Missouri. Thanks to Vicky Howard and Mary Pensel, two extraordinary librarians, for coordinating my visit, and to all their colleagues who prepared to kids so well in advance.

In Jackson, the students were reading The Lightning Thief as part of a Greek gods & goddesses unit. They’re planning a big reading day celebration in November. Each class contributed a page to a wonderful picture book about the Lightning Thief. Thanks to all the kids who participated. During the presentations, we put up book covers on a huge screen using an ELMO projector, and the kids just roared approval (or laughed at the funny ones). I felt like I was conducting a pep rally, the level of excitement was so high. Note to self: Rural community, so don’t use the joke about country & Western music singers getting bumped off in The Widower’s Two-Step! For a second, I thought I was going to get lynched by a mob of angry fourth graders.

The day before, I visited Jackson’s archrival (in football, of course) – Cape Girardeau. Kids from all over town came in for the presentation in the junior high auditorium. After school, I had a great meeting with the Mark Twain Club. (The Lightning Thief is on the Mark Twain Award reading list in Missouri this year.) The kids had to take an AR (advance reading) test on the Lightning Thief in order to attend, and over forty of them made a perfect 100. The kids asked super questions, including many I’d never thought of before. A big topic of interest was the scene where Percy jumps off the St. Louis Arch. They pointed out that the Arch is quite far from the banks of the Mississippi, so how could Percy land in the water? I decided that the strong winds must’ve carried him! Thanks to Tony, a parent at the school, who took me on a tour of the town after the visit. Cape Girardeau has a picturesque downtown and colorful murals on the flood wall at the banks of the river. I saw the old brick building that was headquarters for Ulysses S. Grant – the place where he received Lincoln’s orders giving him command of the entire Union army. I also discovered that Cape Girardeau is the hometown of Rush Limbaugh . . . I’ll let you come to your own conclusions about that. The people were very warm and welcoming, and the kids were wonderfully enthusiastic.

The week started in Dexter, a very small community with about 600 in the high school. I spoke with two groups, mostly 4th-8th grade. At lunch, the local librarians proudly took me to their famous barbecue restaurant. Apparently, people come from miles around to eat there, and then I had to tell them I don’t eat red meat. Oh, well! We had a nice visit, anyway.

Now I’m back home and back at work editing a manuscript. I just got the final cover art for Percy 4, and it looks great! Hopefully I will get to post it on the website on Oct. 4, the same day I announce the title. Stay tuned for that!