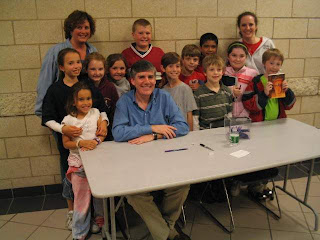 Homeward bound today after a great event for Wellesley Booksmith in the Boston area last night. We had about 350 people come to the local middle school auditorium in Natick. The amazing Alison from Booksmith had special Riptide pens custom-made for the event. They were a definite hit with the kids! So if you see a legion of young demigods patrolling Boston with magic Greek swords this weekend, you will know who to blame. Thanks to everyone who came out, and especially the staff at Booksmith and the local library in Natick for making the event possible. It was a fantastic way to cap off the tour. Above is a picture of me with 4th grade students and teachers who came from Kennedy Elementary in Franklin.

Now, at last, I get to go home! I’ll have a week of relative quiet – just some local events in San Antonio and Austin – before heading off on the second part of the UK tour for Titan’s Curse. This time I’ll be visiting mostly Scotland, followed by my appearance at the Hay Literary Festival. I look forward to being there, though the idea of packing another suitcase is enough to give me nightmares!

A writing update: while in New York, I delivered the manuscript for Percy 4 to my editor. Within a month, I should be able to announce the title on my website. Stay tuned.