Becky and I just returned from a lightning-fast trip to London to see Benedict Cumberbatch in Hamlet at the Barbican. As a proud card-carrying cumberbro, how could I not? More on the play anon . . . 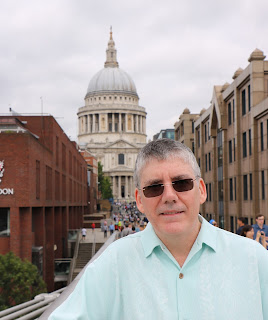 We used our limited time to good effect — seeing many things and getting in some research. (Always research!) I had never visited St. Paul’s Cathedral or crossed the Millennium Bridge, so we did both. I was glad to see Lord Nelson’s tomb, since (MINOR SPOILER) he makes a cameo in The Sword of Summer. I was also happy to visit the Tate Modern and see the reconstructed Shakespeare’s Globe, which I hadn’t visited in almost twenty years. (Yikes!) 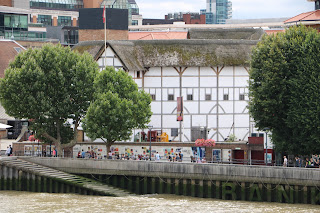 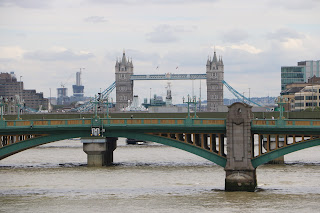 We then took a trip through the Museum of London. Here, I contemplate what I could do with these Viking axes. Hmm . . . 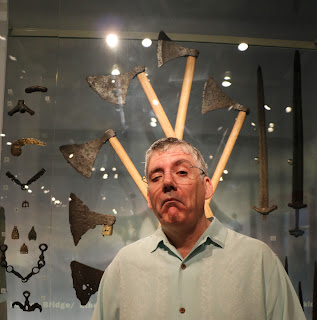 We visited the National Gallery just in time for a strike by the staff, so we did not get to see most of the collection, but I did get to check out Botticelli’s Venus and Mars. Mars looks like he needs some caffeine in the worst way. 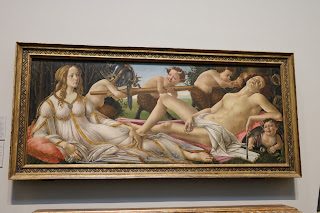 We took a trip down Whitehall to see the usual stuff: Parliament, Westminster Abbey, that clock tower thingie. 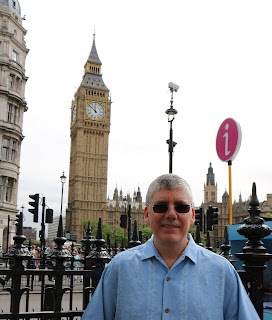 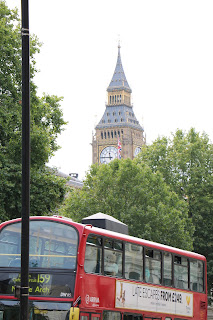 The picture above is so British you can almost smell the fish and chips.

I also spotted Rainbow the hippocampus: 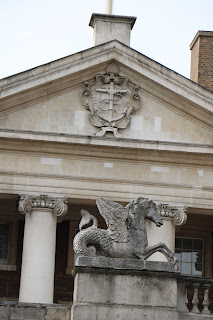 One of the highlights of the visit was getting to see live gladiator fighting on the site of the ancient arena of Londinium, sponsored by the Museum of London. 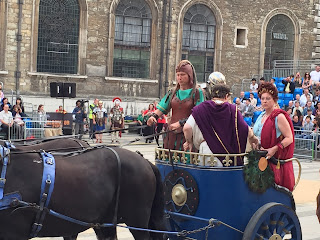 The priestess of Nemesis and her attendants blessed the arena with rosewater: 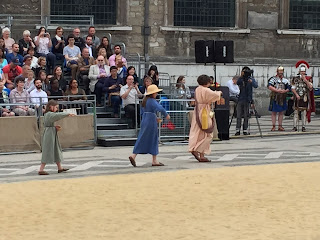 Then the gladiators went at it: 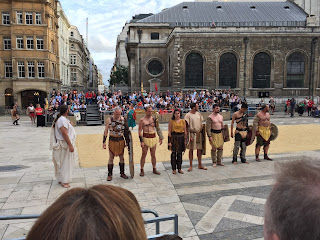 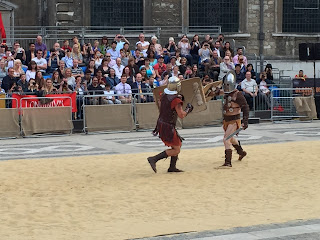 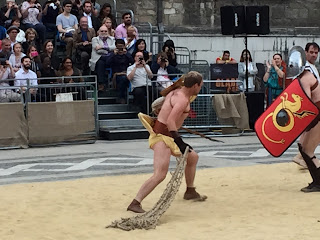 I learned a thing or two about gladiator fighting styles. I also learned I would not want to get on Domitian’s bad side.

And finally, the reason for our trip — Hamlet with Benedict Cumberbatch. 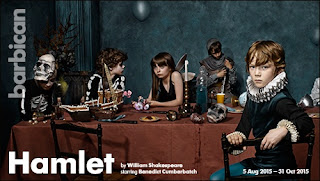 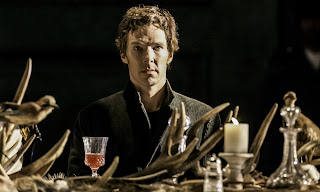 (This is not my photograph. The theater staff were rightly very strict about not allowing photography.)

So how was it? As a production of Hamlet, I’d give it about a 7 out of 10. Cumberbatch himself was excellent, but the staging was clunky and at times even silly. It certainly wasn’t what you might call nuanced. (MINOR SPOILERS FOLLOW) During Hamlet’s soliloquies, the actors in the background would go into slow motion to show that time was nearly stopped. Sometimes this worked all right to show us that Hamlet was speaking only in his mind, but it was also distracting to see people in the background moving at varying slow speeds. You could almost imagine the soundtrack, “Nooooooooooooo.”

To suggest chaos and confusion, and fluid time, the actors would help change sets, some of them moving in slow motion or fast motion, others moving backwards. Again, I don’t think it was meant to be funny, but it was comical for all the wrong reasons.

Toward the end, I almost lost it when Hamlet was about to kill Laertes and the fight scene suddenly froze, while all the other characters burst into silent ballet moves around him. I avoided laughing out loud, barely, but it was just silly.

As an excuse to see Benedict Cumberbatch live on stage (which let’s be honest, is why everyone was there), I’d give the play 10 out of 10. His physical comedy was wonderful as he played Hamlet going mad, dressed as a toy soldier shooting imaginary enemies from his play fort. He inhabited the part of Hamlet convincingly and delivered his lines with pathos and dark humor. He is, as we know, a very fine actor.

What I loved most? It got a lot of people to a Shakespeare play that probably wouldn’t have gone otherwise. Not the best Hamlet I’ve seen, no, but it was an entertaining night and well worth the trip from Boston to see Cumberbatch take on the role.

And now we’re back in Boston and I’m back to writing, with some fresh ideas about axes and swords and maybe even a murderous Dane or two. I’ll keep you posted, Horatio . . .