Looking for a good read for the remainder of the summer? Here are my latest recommendations. All these are adult titles, though many of them would be perfectly good for YA readers. As I’ve mentioned before, I only blog about the books I enjoy. You might not like each one, but maybe some will catch your interest. All of these worked for me! 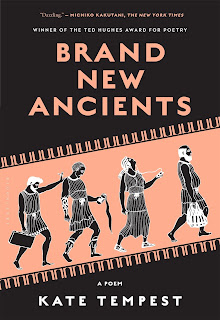 Brand New Ancients
by Kate Tempest
Adult narrative poetry.
I was drawn to this narrative poem by the cover – Ancient Greeks toting briefcases and smart phones. That’s right down my alley. I understand Ms. Tempest is an accomplished musician as well as a poet, and this short book has a lyrical, musical quality. The preface notes that it is to be read aloud. I can see why. The tone and performance elements remind me of the Beat poetry of the 1950s and 60s. “Winged sandals tearing up the pavement” is a line that one can imagine from Lawrence Ferlinghetti.
This is a very short read, with stanzas musing on the constancy of the human condition and how we really haven’t come so far from the days when Zeus and Hera might have walked among us. But the real power of the poem is Tempest’s narrative. She deftly weaves together two generations of modern families, telling stories of love, betrayal, anger and revenge with a minimum of verbiage. It’s truly impressive how much story and characterization get packed into such a small number of pages. Tempest effectively translates Greek tragedy to modern England. 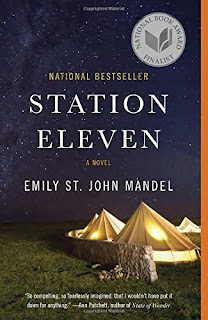 Station Eleven
by Emily St. John-Mandel
Adult speculative fiction
Even since reading The Stand by Stephen King when I was a kid, I’ve had a soft spot for apocalyptic plagues that wipe out humanity. Er . . . I mean in fiction, of course. Station Eleven is in that vein.
The Georgia Flu sweeps across the world, killing most of humanity. St. John-Mandel, using beautiful prose and poignant characterization, follows the lives of various survivors, tracing how their lives intersect in a group of entertainers called the Traveling Symphony. The thread that connects their stories is Arthur Leander, an aging Hollywood star who – on the same night that the plague began destroying civilization – was trying to reboot his career when he died on stage in Toronto during King Lear. We jump back and forth in time, watching how his life influenced what will happen to our band of survivors.
If you’re a fan of the TV series The Last Ship or books like The Stand, you may enjoy the premise and the way St. John-Mandel evokes a world without the trappings of modern civilization. The end of the novel hints at mysteries yet to solve for our heroes. I hope this means a sequel is in the works . . . 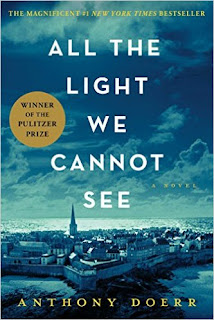 All the Light We Cannot See
by Anthony Doerr
Adult fiction
This book is getting a lot of well-deserved attention for its unique story and its beautiful writing. It starts late in World War II, as the Allies begin shelling the French city of Saint-Malo to drive out the remaining Nazi troops. Our two main characters are Marie Laure, a blind French girl who fled here with her uncle from Paris, and Werner, a radio expert in the German army who is stuck in the city when the attack begins. We jump back and forth in time, and between the two characters’ perspectives to see how both young people were brought to this place.
If you like straight-ahead, linear, plot-driven war novels, this is not the book for you. It does have a central plot that brings the two characters together – a mystery about a possibly magic gem hunted by an evil, terminally ill Nazi officer – but that is almost beside the point. In fact it feels like something added after the fact, as if an editor said, “You know, what you need is . . .” That plot, and the way it resolves, strongly echoes the mystery in the movie Titanic.
What kept me turning pages, rather, were the characters’ lives and the short, well-crafted scenes. Doerr’s writing is elegant and evocative. Reading it is like eating the best gelato – so decadent you are sure you’ll put on weight. He treats Marie Laure and Werner with equal empathy, and their interaction – when they finally meet – is not your stereotypical wartime love story. It is much better, much more bittersweet and haunting.
It took me about fifty pages to really get into the book and figure out the structure, but once I did, I couldn’t stop. 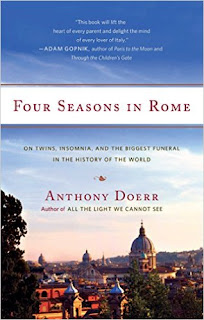 Four Seasons in Rome
by Anthony Doerr
Adult nonfiction
After finishing All the Light We Cannot See, I’ll confess I was a bit addicted to Doerr’s lovely writing. Since we were about to take a trip to Rome, I thought I would pick up this travelogue about Doerr’s year in Rome as a creative writing resident. He describes the city with love and nostalgia, capturing Rome at its funniest and most breathtaking. It’s difficult to say something new about a city that has captured imaginations for millennia, but Doerr manages to do so in this story of an Idaho couple with two toddlers who are thrust into Rome for a year. Again, this is a book you read for the writing. Doerr really knows how to craft a scene and turn a phrase. 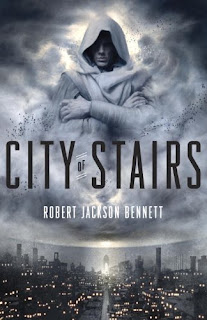 The City of Stairs
by Robert Jackson Bennett
Adult fantasy.
A highly original story involving gods resurrected in a modern world – how could I not be drawn to this? Set in an early industrial world where the two major nations are Bulikov (modeled loosely on Russia) and Saypur (modeled loosely on India), this story starts as a murder mystery and develops into a high fantasy of world-changing magic. Centuries ago, Bulikov had a pantheon of active gods who led their mortal worshippers to victory and made them the dominant world power through magic. Then, somehow, the leader of Saypur found a way to kill gods. Supposedly all the gods either died or disappeared, and soon Saypur was the dominant world power, using science and technology to conquer. Since then, Bulikov has been reduced to a backwater.
The main character, Shara Thivani, arrives in Bulikov to solve the murder of her former mentor, but soon learns there are strange things going on. It’s possible the gods are not dead after all. And if the gods come back, it might threaten Saypur’s power and plunge the world into another civil war.
The world building is great, the action is awesome, and I loved the clash of cultures and belief systems. Definitely recommended for fantasy fans! 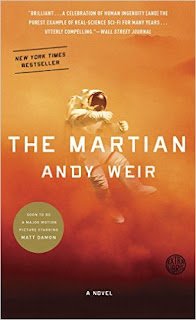 The Martian
by Andy Weir
Adult science thriller.
Love it, love it! A meticulously researched, briskly paced and surprisingly funny story about an astronaut left behind on Mars, presumed dead, who must now figure out how to survive and let the folks back on Earth know he is alive and needs rescue. This is hard-science science fiction. Parts of it read like really complicated (but amusing) word problems, juggling mass and time and weight, etc. But all of that adds to the realism. You can tell Andy Weir loves his space exploration and knows a ton about it. He totally had me convinced, anyway. The Martian is a fast read, and the main character’s irrepressible sense of humor will have you cheering for him as he tries to survive against impossible odds. I will also never eat another potato again. (Long story.)  If you’re looking for a fast-paced, believable space adventure set in present day, this is your book. 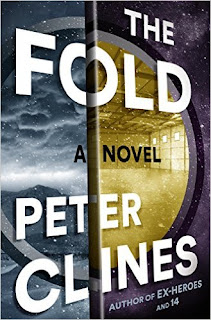 The Fold
by Peter Kline
Adult science fiction
I read this book very quickly – always a sign that I liked it. The story moves along at a brisk pace. The mystery keeps unfolding in increasingly bizarre new layers. A team of scientists discovers a way to teleport matter between two rings – very much like Stargate, though early on we are warned not to make that comparison, because the scientists hate it. The only problem: The team is secretive about how the technology works, and why they insist on testing it for another year before publically announcing the breakthrough. Strange things begin to happen. People from the team start behaving in odd ways. At first, it’s nothing big, but still . . . the powers that be ask Mike Erikson, a man with a perfect memory, to visit the facility and find out what the team is hiding before ruling on whether or not to extend funding. Things get weird (and dangerous) very quickly.
This book is sort of the opposite of All The Light We Cannot See. Read The Fold for the plot, not the writing. The prose is workmanlike and gets the job done, but don’t expect evocative descriptions or nuanced characterization. Sometimes the writing gets in the way, at least it did for me. For instance, the author uses the pacing mechanism “A moment passed” so often that it became unintentionally funny. I was reminded of the old Monty Python sketch: “A moment passed. Another moment passed. Then, suddenly, another moment that seemed like the same moment but was actually a different moment . . . passed.” Despite that nitpicking, the book is a real page-turner. If you want a good beach read that you can finish quickly and don’t have to think about too much, this is great entertainment. 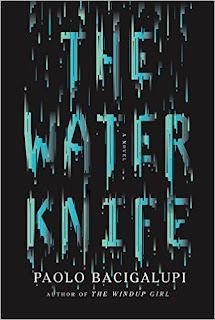 The Water Knife
by Paolo Bacigalupi
Adult science fiction
Bacigalupi is the master of ecological dystopian novels. He describes the world after climate meltdown in frighteningly believable detail. I loved his novel of a drowned Bangkok, The Windup Girl, and his two young adult novels set in the wastelands of the former U.S. – Ship Breaker and The Drowned Cities. The Water Knife is set closer to our own time. The United States still exists, but it is frayed and crumbling. The Western states are competing for scarce water supplies, and the competition is getting ruthless: legal battles, sabotage, paramilitary raids, everything sort of outright war. Given what is happening to our water supplies in America and worldwide, the scenario is scary and gripping. This is not so much science fiction as “this could be us in about forty years if we don’t stop being idiots” fiction.
The story revolves around three characters – a disillusioned reporter who is covering the slow violent death of Phoenix, Arizona, a young girl who is a refugee from the collapsed state of Texas, and a ruthless “water knife” who works for the Las Vegas government to procure water rights at any cost. When someone in Phoenix finds legal documents that could completely change the balance of power, all the players will stop at nothing to get them, and our three protagonists must scramble to make a score before they are destroyed in the crossfire. The plot is great, the characters relatable, but what will really haunt you is how well the author builds this near-future world. It reads less like a fantasy and more like an augury of what will happen to us – and the prediction is not pretty.