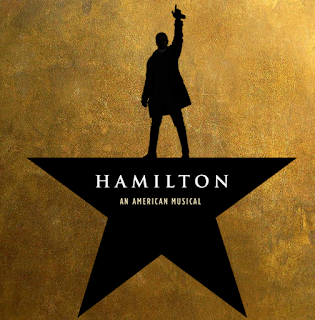 It was an unusual weekend. We went to New York to kick back, see some shows, hang out with Percy, visit Mount Olympus, etc.  You know, the usual tourist stuff.

Saturday we had miraculously scored tickets to the matinee performance of Hamilton, which we’d heard was THE SHOW to see on Broadway. I taught American history for six years. I’m a sucker for Revolutionary lore. I figured sure!

We left for the theater with tons of time to spare, but ran into a traffic nightmare that was bad even by Manhattan standards. We had no idea what was going on. Finally we got within two blocks of the theater only to find the entire area cordoned off by police. They had barricades. They had snipers on the roofs. They had garbage trucks lined up along the sidewalks forming an impromptu wall of protective metal.

So, okay . . . I figured the president was passing through Manhattan. That’s the only thing it could be, and I had been “Obama’ed” once before — completely unable to move through the city because the president’s route cut across Manhattan.

We tried to figure out a way to the theater. No luck from any direction. Police kept turning us back. And then it occurred to me . . . President Obama wasn’t passing through. He was going to the same play we were. That’s why getting to the theater was impossible.

I was sure we would just have to miss the performance, but a nice staff member from the theater finally found us and a few other stranded folks and got us through the extremely tight security. We missed the first twenty minutes of the show, but we did get seated.

That part pretty much sucked. Trying to leave the show afterwards also sucked. The crowds around Time Square were dangerously packed, like ‘New Year’s Eve’ bad. It seemed like a lot of pain to put Manhattan through so the president could see a play. (Even a president I voted for twice. Cough, cough.)

But, okay. That concludes the griping portion of this blog post, because I’ll admit it was very cool to see a show about the birth of the American presidency with the sitting U.S. president in the row right in front of me. Every line in the play seemed more meaningful, more immediate. The jokes were funnier. The subject matter was more charged. When King George talked about all the presidents seeming small after George Washington, I half expected Obama to jump up and engage him in a rap throw-down like the other characters on stage were doing. I can imagine the president was wishing his cabinet meetings were as entertaining as the ones in the play.

Even without Barack Obama in the house, I have to tell you the play was BRILLIANT. I didn’t think it could possibly be as good as all the reviews said. It was better. I wish I could be an American history teacher again just so I could take my students to this play. They would learn more in two hours at Hamilton, and have more fun doing it, than in an entire semester of classwork.

The story of Alexander Hamilton’s life set to a hip-hop/rap/pop soundtrack may not seem like a natural fit, until you see the play, and then it’s impossible to imagine the story any other way. The creator Lin-Manuel Miranda is a freaking genius. The casting of African American and Latino actors  as George Washington, Jefferson, Hamilton, Burr, etc. gives an incredible depth to their personalities — allowing the modern age to truly own the Founding Fathers on so many different levels. Miranda’s history is right on the mark. He uses primary sources as the basis for a lot of the songs — personal letters, speeches, pamphlets — which is a sure way to a history teacher’s heart. But there is nothing dry or boring about this history lesson. Hamilton comes alive on stage. His story is funny and tragic and inspiring. I actually got tears in my eyes at one point, and I do not cry often at performances. King George was a riot. Thomas Jefferson was insanely funny as Hamilton’s hip-hop arch-rival. I mean . . . I can’t think of anything I didn’t like.

Well, I got a little nervous when Becky pulled her eyeglasses out of her pocket and the secret service guys tensed up and glared at her, but fortunately the only guns that were drawn on us were the fake muskets from the stage.

But President Obama . . . seriously, man. Let’s coordinate our schedules so we’re not in NYC at the same time. We have to stop meeting like this.