I always have a good time at the Museum of Fine Art in Boston. Becky and I took a stroll through the ancient Greek and Roman collection yesterday and found some unexpected surprises.

Now first . . . this Assyrian demigod. According to the description, he is holding two animals “who are urinating on him to purify him.” Say what? We can all be glad that the Greek demigods at Camp Half-Blood do NOT practice this ritual. 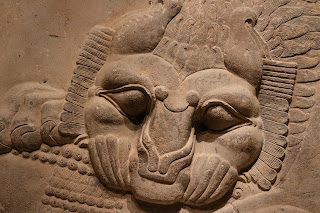 This Persian lion was pretty cool, however, sinking his teeth into a bull. He looks kind of like a robotic lion, doesn’t he? I’ll have to ask Hephaestus. 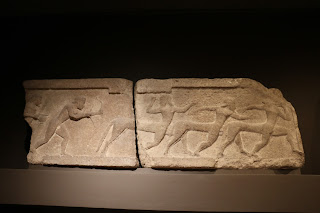 Moving on to the Greek section, this frieze from a temple of Athena shows a guy chasing a group of centaurs with a bow. Apparently the centaurs did not realize they could just turn around and stampede the puny mortal. Or perhaps they are running because someone told them there was a sale on root beer nearby. 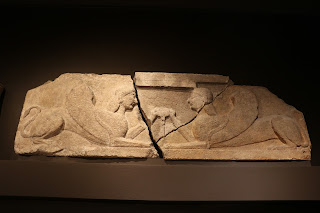 These sphinxes are hanging out in the teachers’ lounge, anxiously discussing their standardized test results. 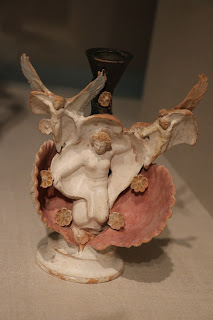 I’d never seen anything like this before — a ceramic oil container decorated with the birth of Aphrodite. It looks like some cheap souvenir you’d see in a gift shop, but this is thousands of years old. I’m kind of amazed it survived intact. Aphrodite must have protected it. 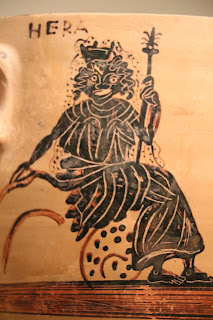 I love this completely accurate and dignified picture of Hera from one of the Greek vases. She looks beautiful, doesn’t she? 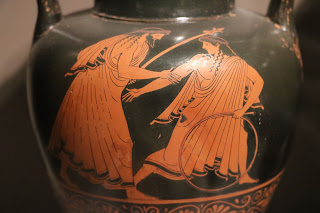 Here is Zeus chasing Ganymede, one of his mortal boyfriends. What can I say? Like most of the gods, Zeus had boyfriends as well as girlfriends. Zeus was attracted to Ganymede’s good looks. Judging from the picture, Ganymede also had mad skills with the Hula-Hoop. 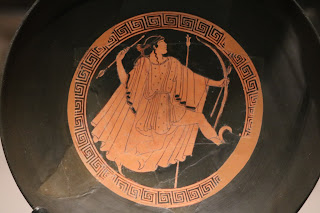 Apollo, getting ready to shoot somebody. It works better if you put the arrow in the bow, Apollo. 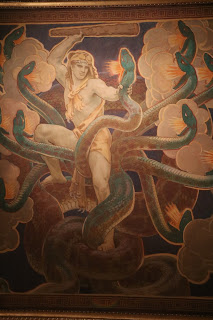 Hercules fighting the Hydra in one of John Singer Sargent’s murals. Doesn’t Hercules look like Rama from Indian mythology with the blue skin? 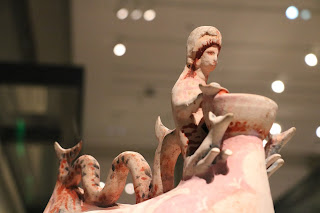 Scylla the sea monster on top of a ceramic vase. Why you would want a Scylla vase, I’m not sure. Maybe to pour Scylla-Aid, grape flavored. Oh, yeah! 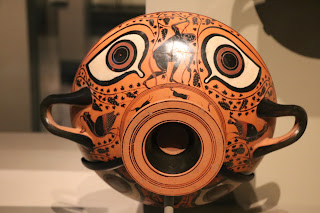 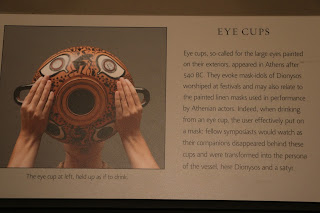 It’s a mask! It’s a cup! It’s both! I’d never heard of these before, but apparently eye cups were all the rage at Bacchanalian parties. You would drink to Dionysus, and by lifting the cup to your face, you would “become” the god by having his mask over your face. Warning: do not drink and drive, especially with a ceramic cup over your face. Those painted eyes will not do you much good on the highway. 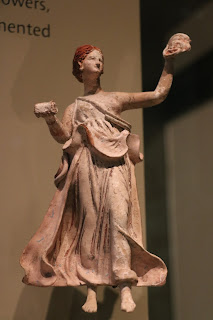 A tiny ceramic Nike, holding a comedy mask. Why? I don’t know. She doesn’t have much of a sense of humor. 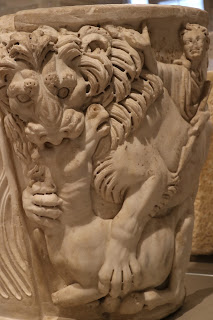 Another lion, snacking on the head of a horse. Or maybe they’re just cuddling. 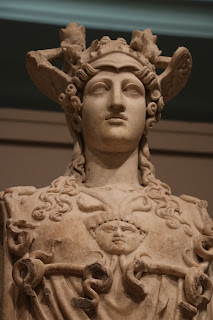 Nobody knows what the Athena Parthenos looked like, but here is a Roman replica that looks pretty fierce. I’m wondering if beer cups with straws were once attached to either side of that helmet. 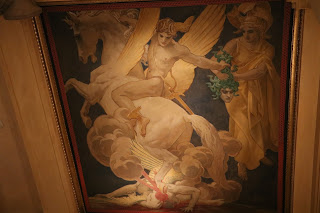 Perseus rips the head off Medusa and rides away while Pegasus tramples his mother’s corpse. Not sure that’s how it happened in the myth, but whatever. Notice Perseus is handing off the head to Athena as he rides away, because Perseus is trying to work on his passing game. 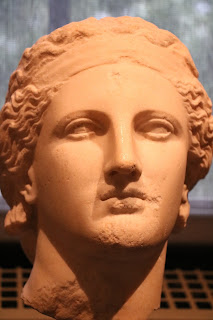 Most of the statues of Dionysus make him look creepy and crazed, but here the god of wine looks almost calm and normal. Something is obviously wrong . . . 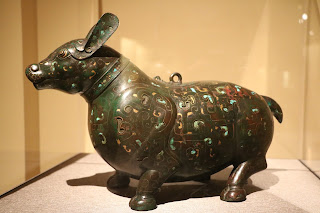 A Chinese tapir FOR NO APPARENT REASON, but I thought it was cute. 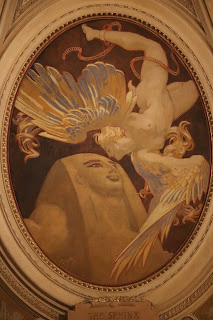 Why is Icarus kissing the Egyptian sphinx? I don’t know. You’ll have to ask John Singer Sargent. What happens in Giza, stays in Giza. 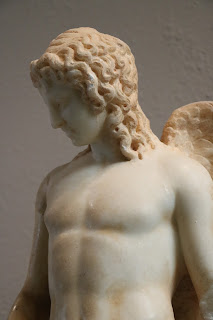 Great statue of Eros — captures some of that threatening, not-so-cute personality you get in House of Hades. 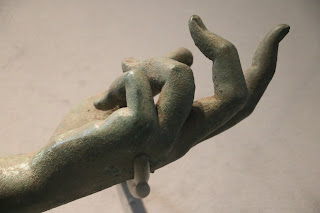 One of the many bronze spare parts the museum has, just in case Hephaestus needs to repair one of his automatons. 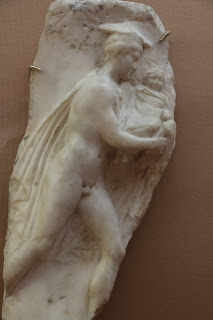 Hermes carries the baby Dionysus to the nymphs who will raise him. Why is Hermes carrying out this important task buck naked? Maybe he was in a huge hurry to get the kid to safety. Couldn’t be bothered to put on pants. He’s a god. Don’t judge.

That’s just a small sample of the collection at the MFA. If you want to visit, see if you can follow my footsteps and find the stuff we saw!