I’ve been reading a lot the past few months — as usual an assortment of adult and children’s books, fiction and nonfiction. If you’re looking for some reading suggestions for kids this summer, here are a few great ones I’ve come across: 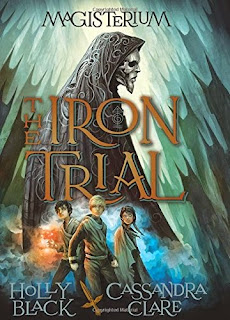 The Iron Trial, by Cassandra Clare and Holly Black. Middle grade fantasy.
Callum Hunt does notwant to be a magician. All his life, his father has warned him about the dangers of magic, and the sinister ways of the mages who teach youngsters to use their powers in the underground world of the Magisterium. When Callum comes of age and must take his entrance exam for the Magisterium, he tries his hardest to fail. But he fails to fail. He is chosen to train with Master Rufus, the most prestigious mage in the Magisterium. Callum (Call) is ripped away from his normal life in Carolina, separated from his father, and plunged into a subterranean world his father has said would be worse than death.
The Iron Trial is a hugely fun, inventive spin on the middle grade fantasy novel. Yes, the parallels to Harry Potter are obvious, but as I see it that’s sort of the point. Clare and Black take those patterns and expectations and deliberately turn them upside-down. Callum doesn’t want to be a magician. He wants to fail at magic. His experience is not like Hogwarts. It’s alternately boring (sorting piles of sand, anyone?) and terrifying (the elementals are awesome creations), and Call can’t be sure who to trust – even his parents. His mother’s dying words: Kill the Child, apparently meaning her own infant son. And his father . . . has he been protecting Call all these years, or lying to him? Is Master Rufus a friend or enemy? Will Callum ever be allowed to leave his new home?
I liked Call a lot. His leg was badly broken when he was a baby, and his trouble walking informs his character. It’s especially poignant when he wonders if he can learn to fly as a magician, thus making him more mobile. He is mistrustful but empathetic, capable and yet deeply flawed. I also liked the cast of supporting characters. His fellow apprentices are great, especially Tamara. The magic system is inventive and logical. The world-building is fantastic. The Iron Trial sets up the game board for the rest of the series, which promises to be great – and after that huge, massive twist at the end (no spoilers, but oh boy!) how can you not want to read on? 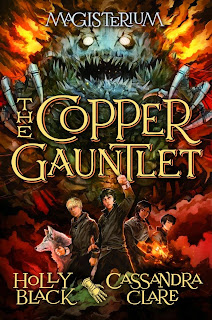 The Copper Gauntlet, by Cassandra Clare and Holly Black. Middle grade fantasy.
Okay, this is cheating, since the book doesn’t actually come out until September 1, but I was lucky enough to get an early copy, and I can assure you this sequel is even stronger than The Iron Trial. It’s hard to review without giving spoilers for the first book, but let’s just say Callum Hunt has a lot to think about. Some of the things he’s found out about himself, his family and the Magisterium have left him reeling. Even the companionship of his new “pet” wolf Havoc (a fabulous character) can’t console him as he prepares for his second year at the Magisterium. Call’s relationship with his father is strained to say the least. His friends at the Magisterium seem to accept him, but can they really? Call is afraid he is a danger to himself and anyone who gets close to him. Once back at the Magisterium, Callum and his friends face a new dilemma – the theft of a copper gauntlet called the Alkhahest, which in the wrong hands could destroy the Magisterium’s power. The Copper Gauntlet is full of twists and turns, surprises and wonders. Callum comes closer to learning to truth about himself, and makes powerful enemies along the way. If you liked The Iron Trial, you will loveThe Copper Gauntlet. I can’t wait to read more of this series. 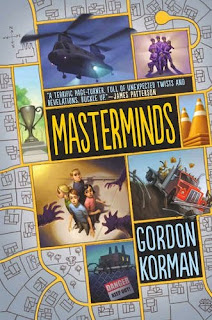 Masterminds, by Gordon Korman. Middle grade adventure. As usual, Gordon Korman delivers a fast-paced, well-crafted adventure full of creative twists and surprises. Eli lives in Serenity, New Mexico, which is so perfect it seems too good to be true. Everybody has a nice house. The schools are great. There is zero crime and zero unemployment. Eli has never left his hometown, but one day he discovers something that shakes his world. Serenity is not what it seems. He and his friends can’t trust anyone – not their neighbors, definitely not their parents. This perfect little world hides a dark secret linked to some of the world’s most infamous criminal masterminds. Hooked yet? You should be! This is a perfect summer read for mystery and adventure lovers.