Becky and I took a trip through the MFA Boston last night and ran into some old friends from Greek mythology. If you visit the museum, see if you can retrace my footsteps! 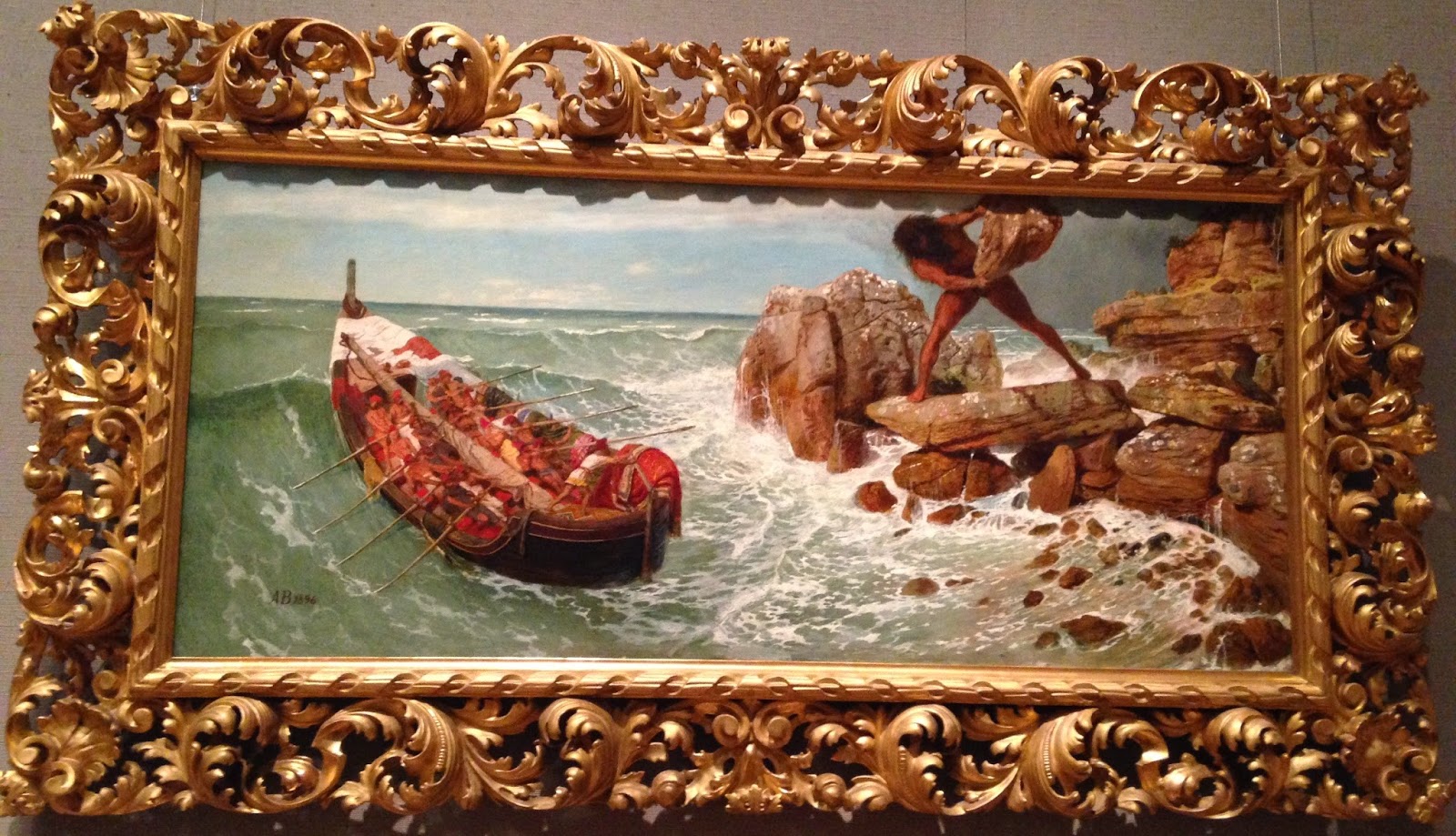 Odysseus and the gang escape from Polyphemus. Ya know, I would recommend being a little farther away before you start yelling insults at a Cyclops. 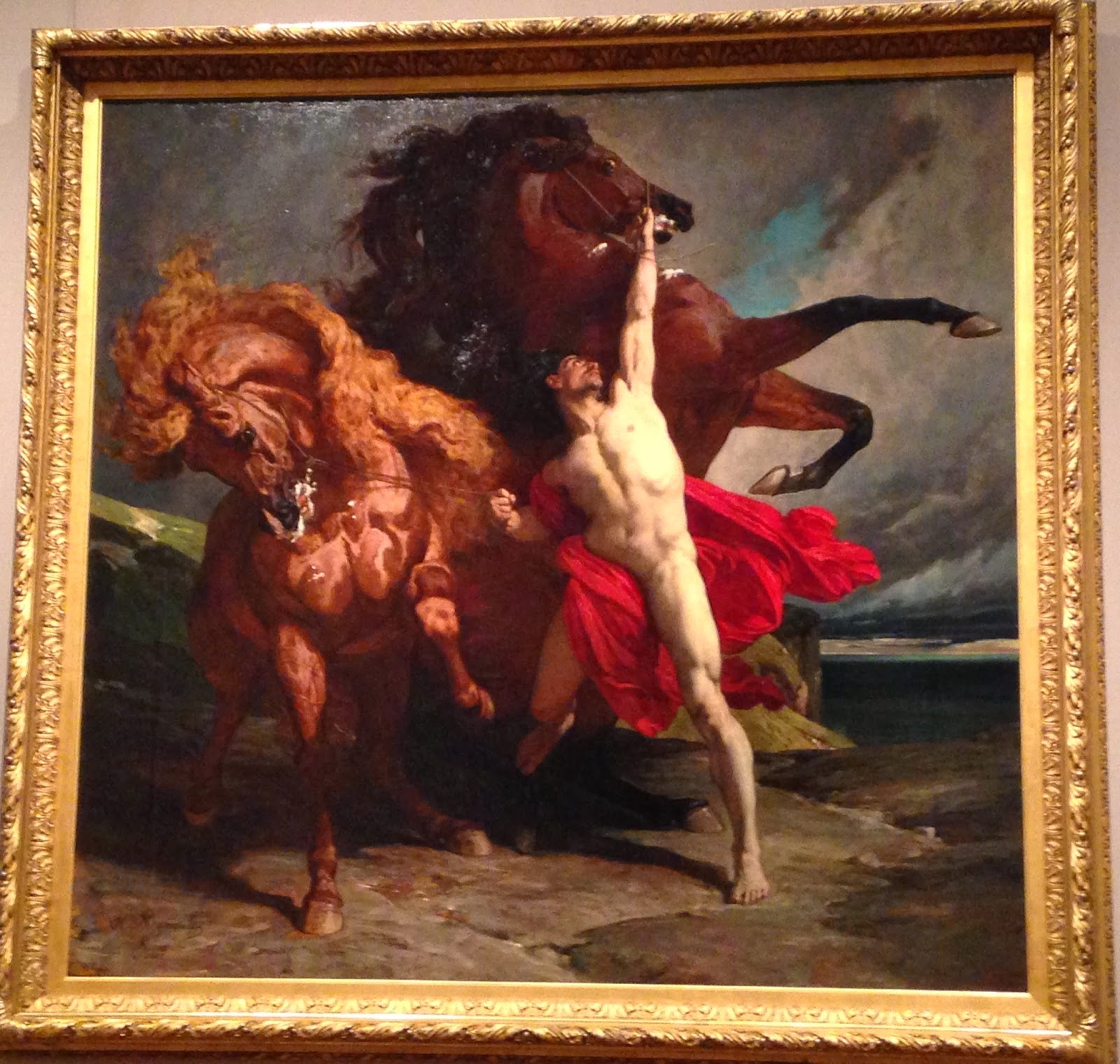 Automedon, the chariot driver for Achilles, tries to restrain Achilles’ two immortal horses. The horses could tell the future, so they knew this would be their last ride. As a result, they weren’t too happy about getting harnessed up. Pro tip, Automedon: if you’re going to wrangle horses, put some clothes on. 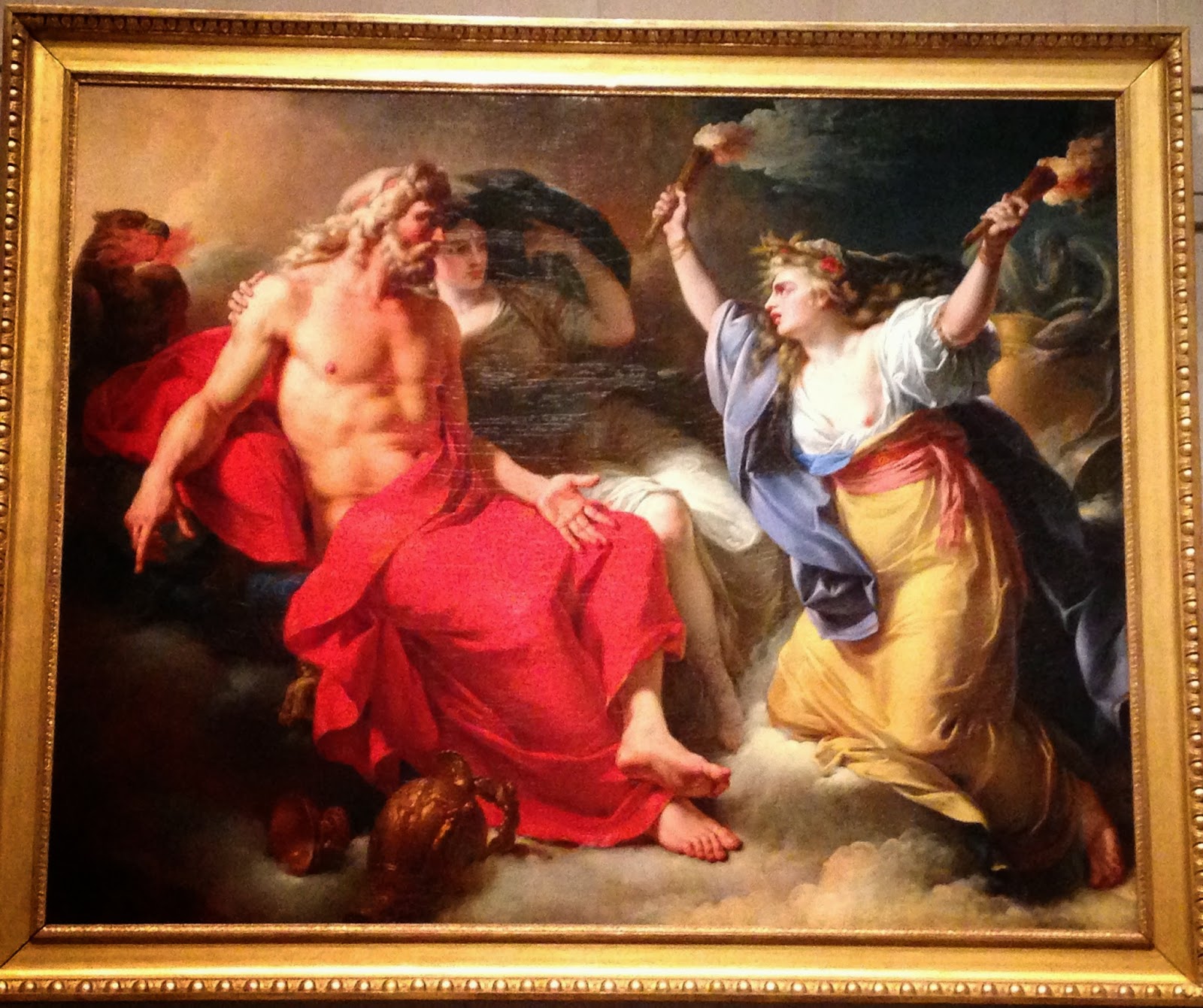 Ceres appears before Jupiter and Juno, asking to borrow the big guy’s lightning bolts so she can punish whoever kidnapped her daughter Proserpine. Jupiter has been working out. Dude has abs. Ceres seems to be having a bit of a wardrobe malfunction, but amazingly, Jupiter is managing not to look. Ceres is trying to maintain his attention by waving two flaming torches. I guess Jupiter is ADHD, like his kids. 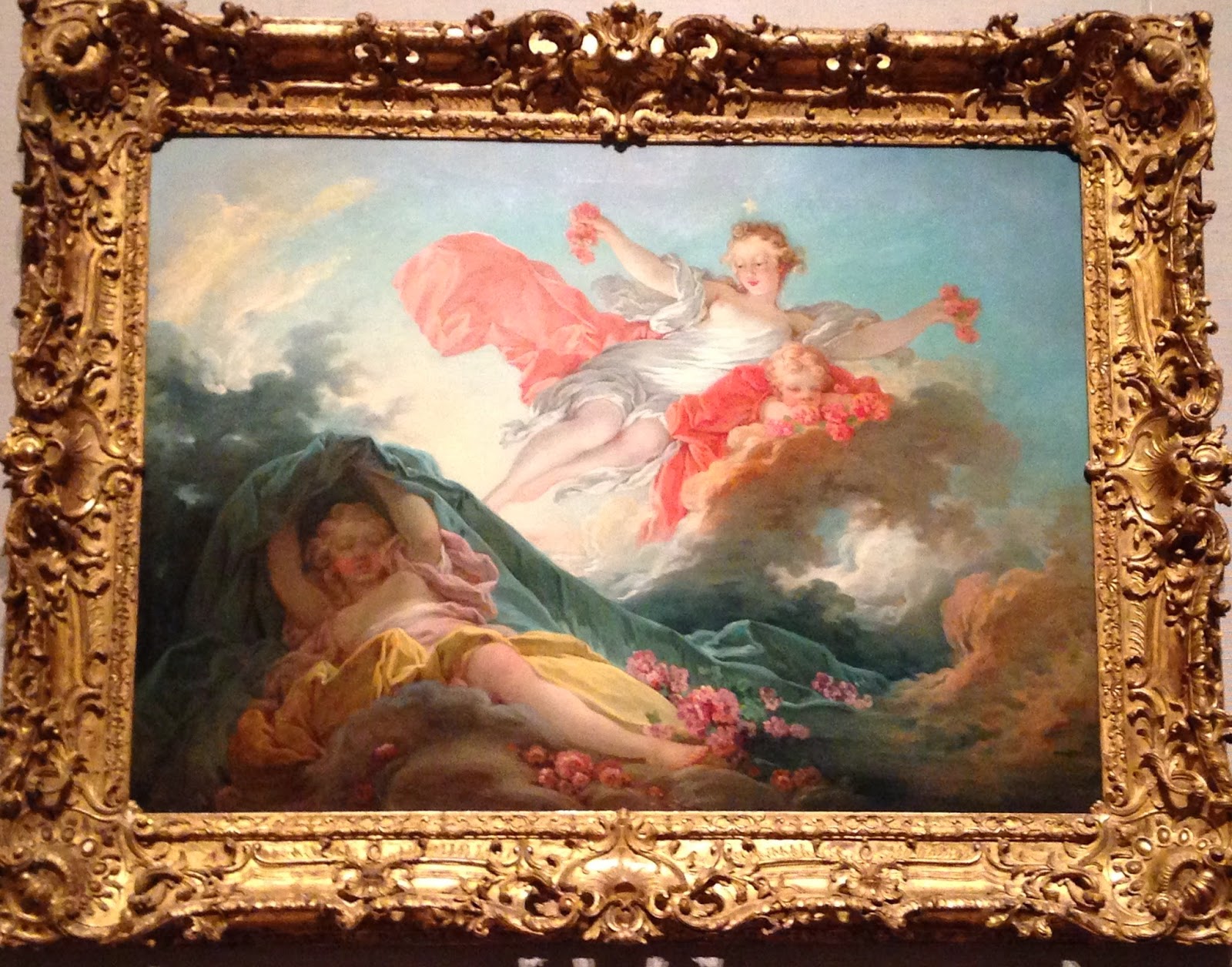 Aurora, goddess of the dawn, triumphs over Nyx, the night goddess, who just wants a few more minutes of sleep under the covers. I hear you, Nyx. I hate cheerful morning goddesses, sprinkling rose petals in your face and singing and whatnot. 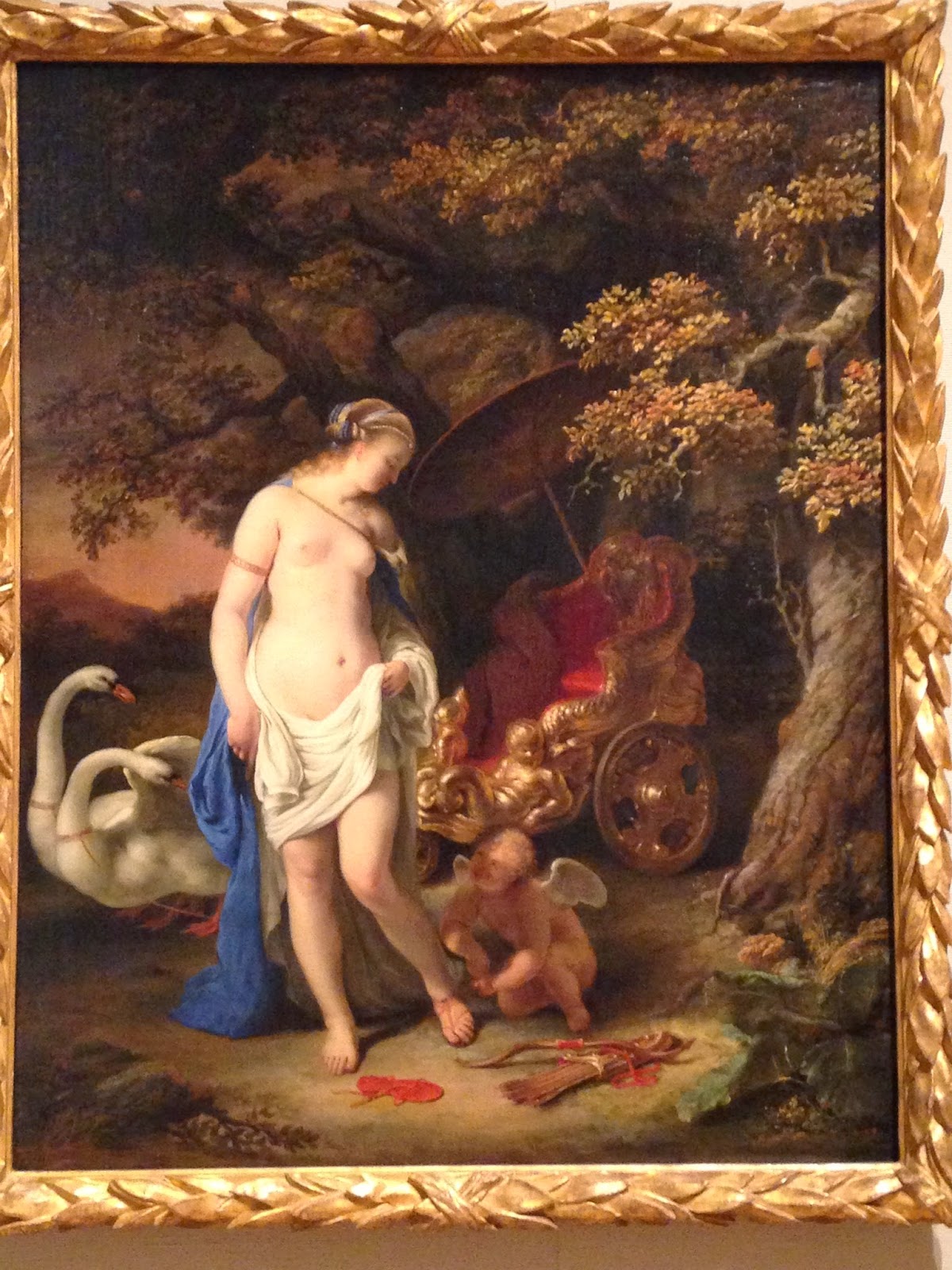 So here’s Venus wearing very little, her son Cupid squatting at her feet. I’m not sure what Cupid is doing. I don’t want to know. Notice in the background the swans pulling Venus’s chariot. Everybody is looking at Cupid, like, “Seriously? You couldn’t wait until we got home?” 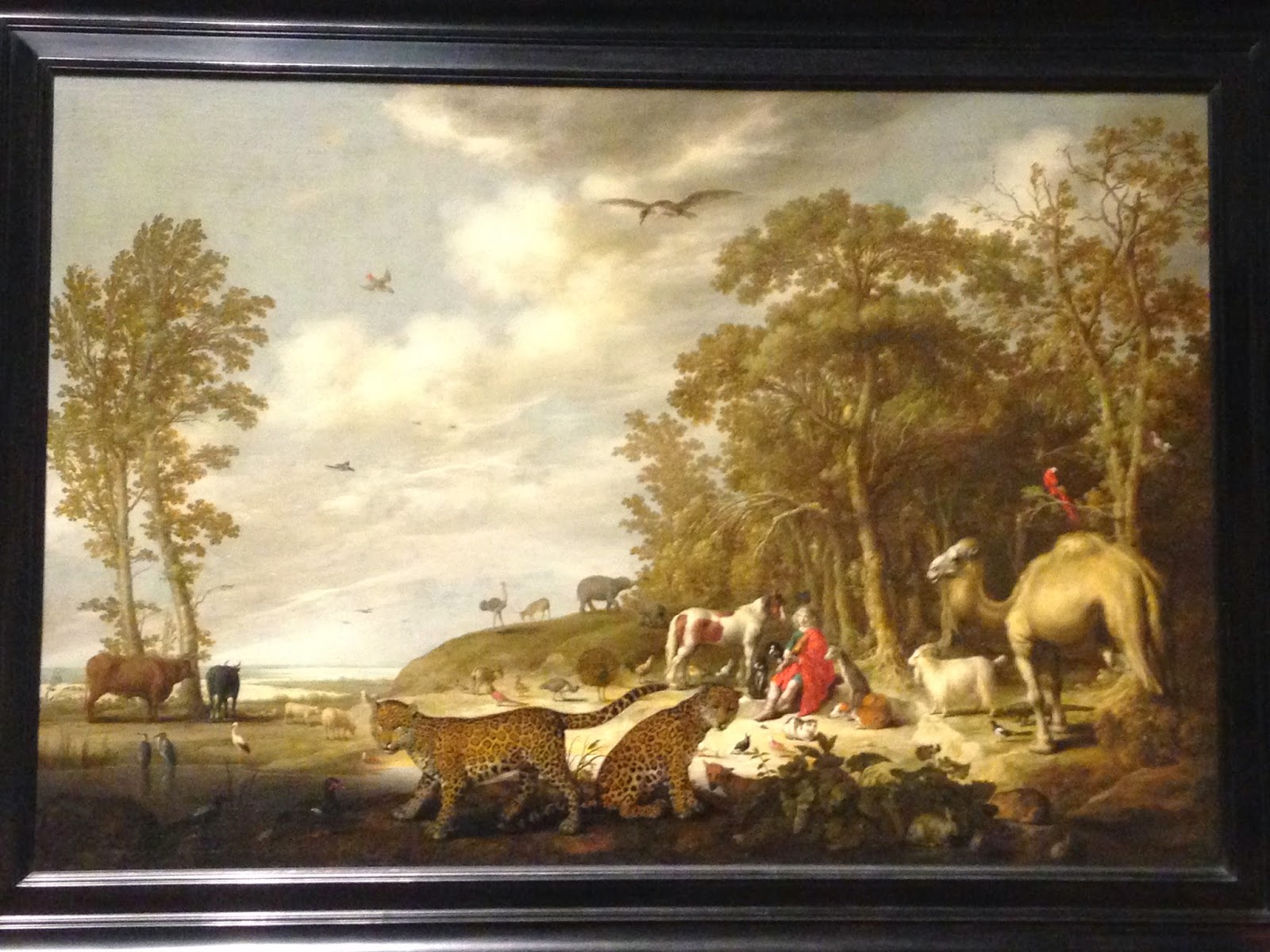 The great musician Orpheus charms the animals with his music. Pretty sure Orpheus did not have hair like that. Also, violins were not invented in ancient Greece, yet there he is playing one. But that’s okay, because he is singing to a camel and a llama, and that is EPIC. 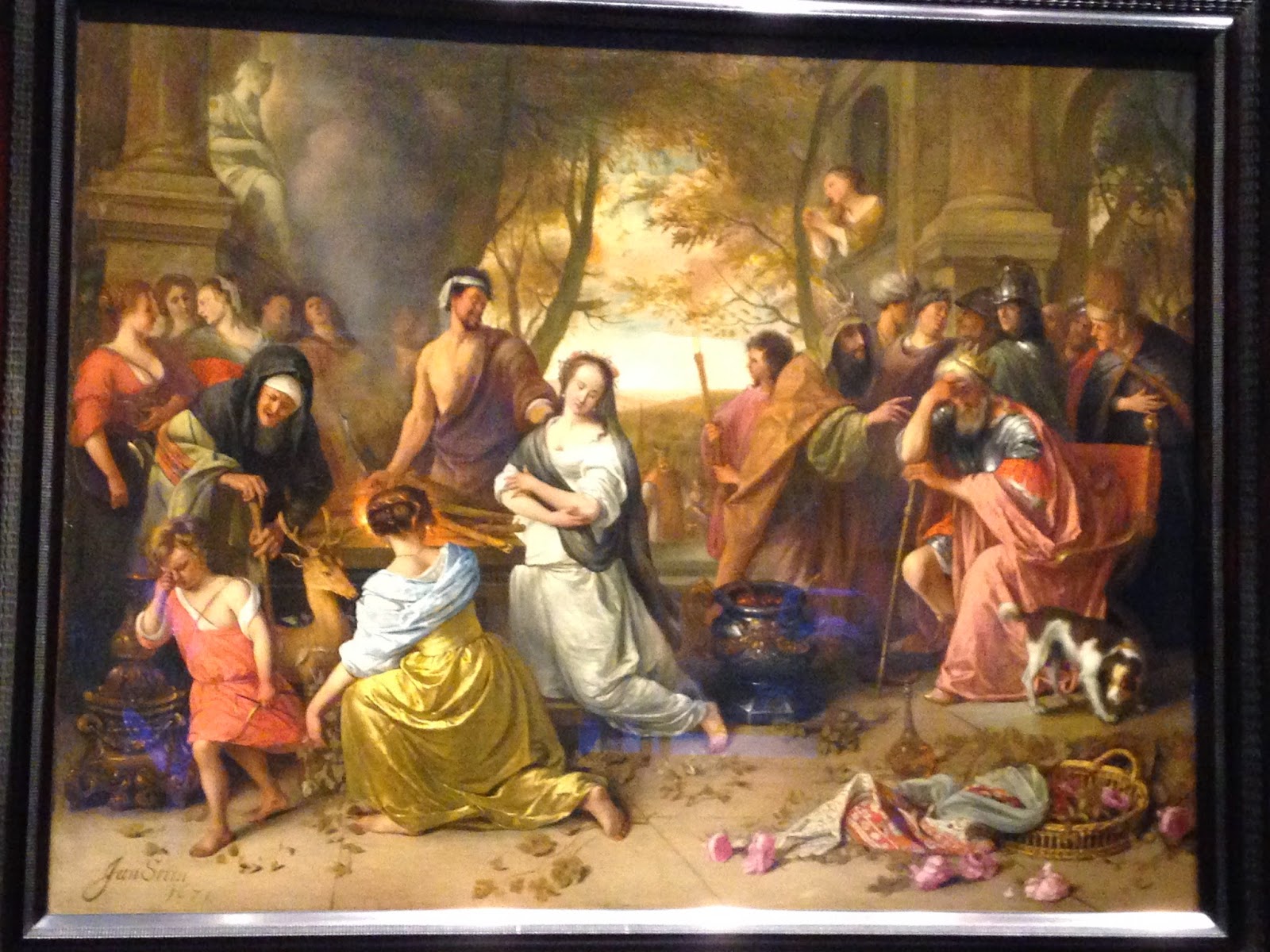 King Agamemnon prepares to sacrifice his daughter, Iphigenia, to the goddess Artemis. Agamemnon angered Artemis by not giving her proper tributes. So naturally, that is his daughter’s fault and she must die. Notice the executioner grabbing her arm and grinning like a psycho. Don’t worry, though. In the end, the king sacrificed a deer rather than his daughter. Maybe he thought Artemis wouldn’t notice the difference. 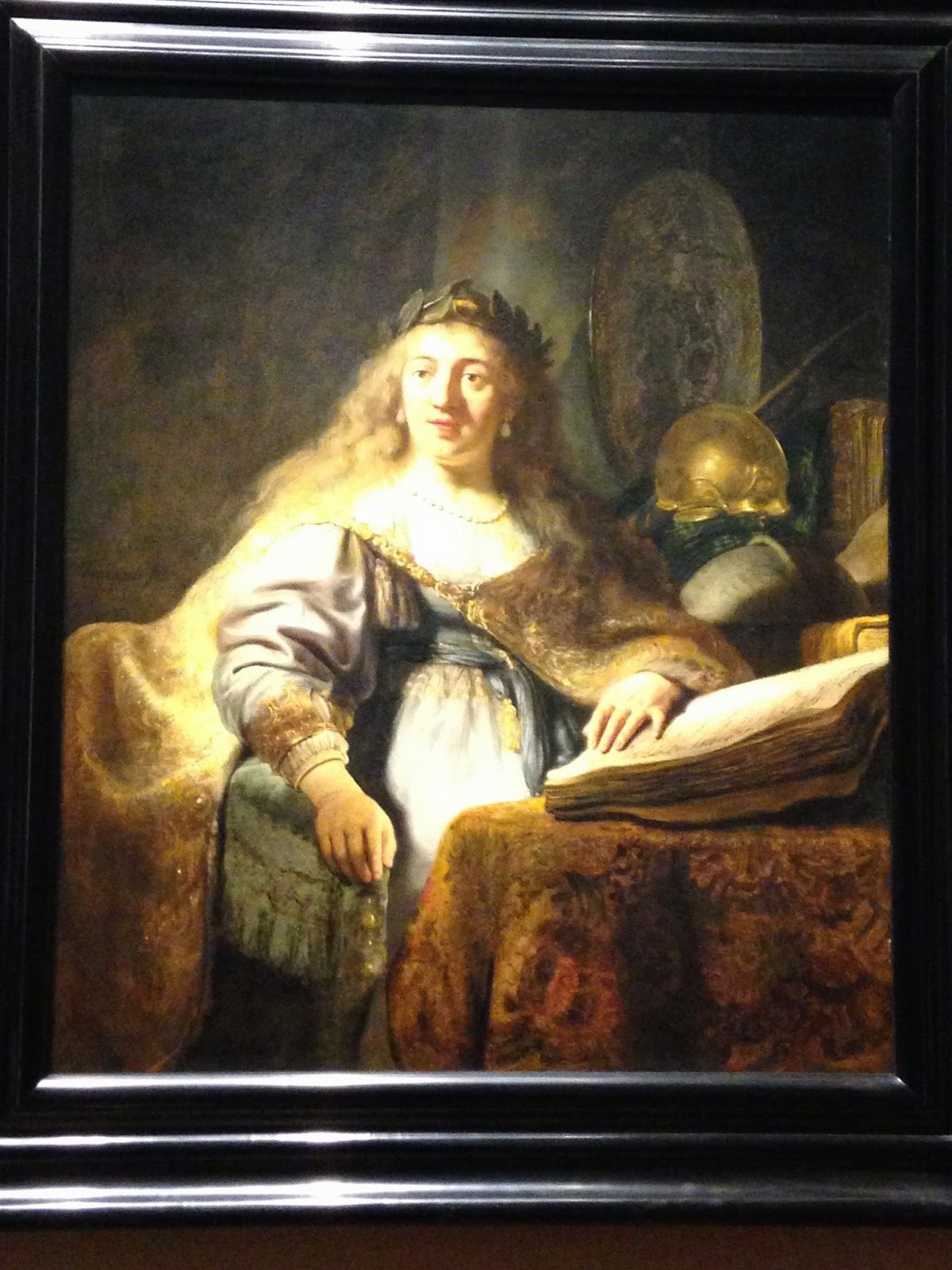 No way. Uh-uh. Nice try. This painting is supposed to be the goddess Minerva, but we all know that’s actually Bacchus in drag. He was the god of cross-dressing, after all. And no, I’m not kidding about that. 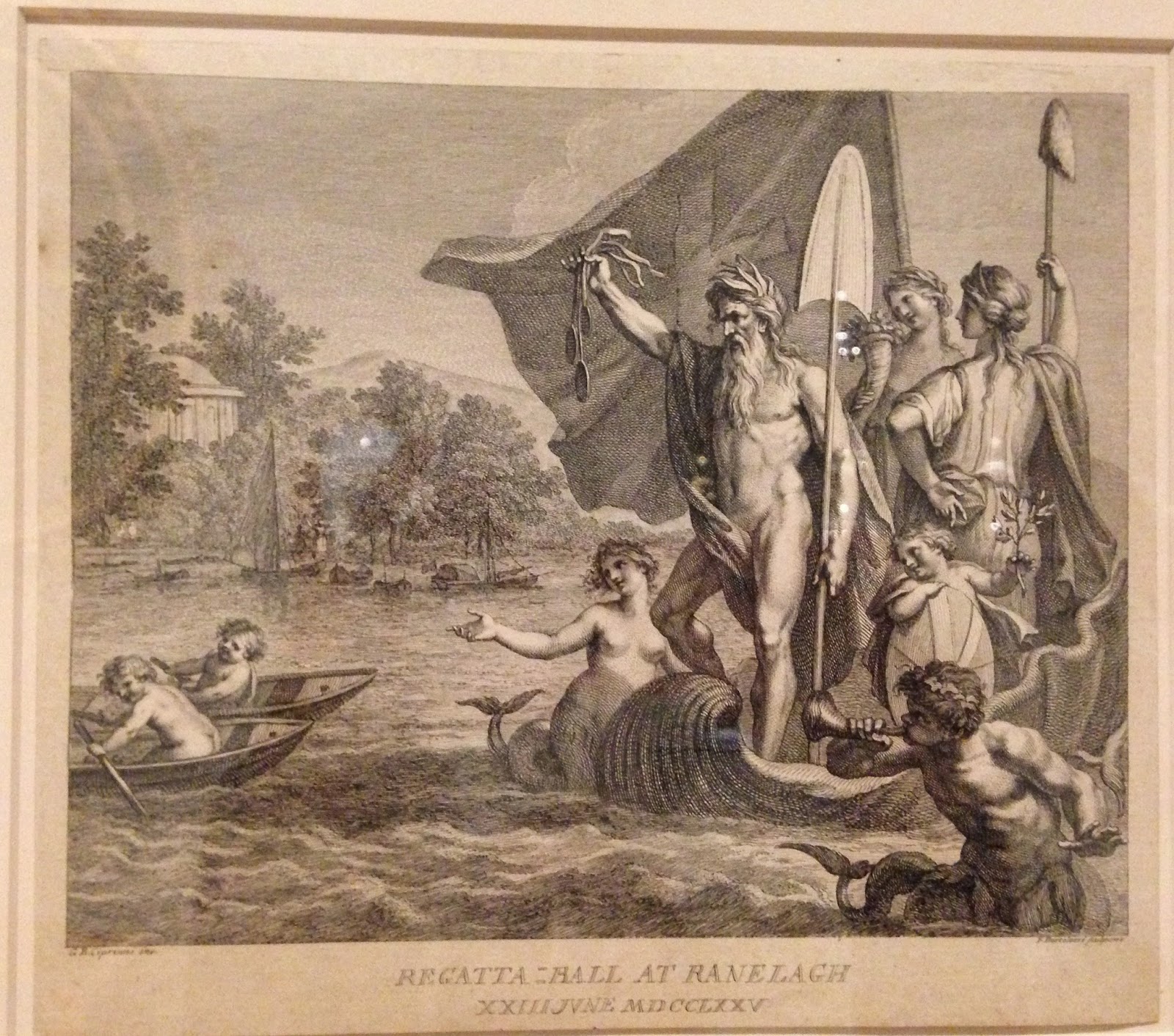 This is a party invitation from 1755, inviting you to a boat race in London. According to the picture, Neptune himself will be the judge. See, he’s dangling little gold medals over the water. I think this is an early example of what we call “false advertising.” Good thing I got the StubHub guarantee. 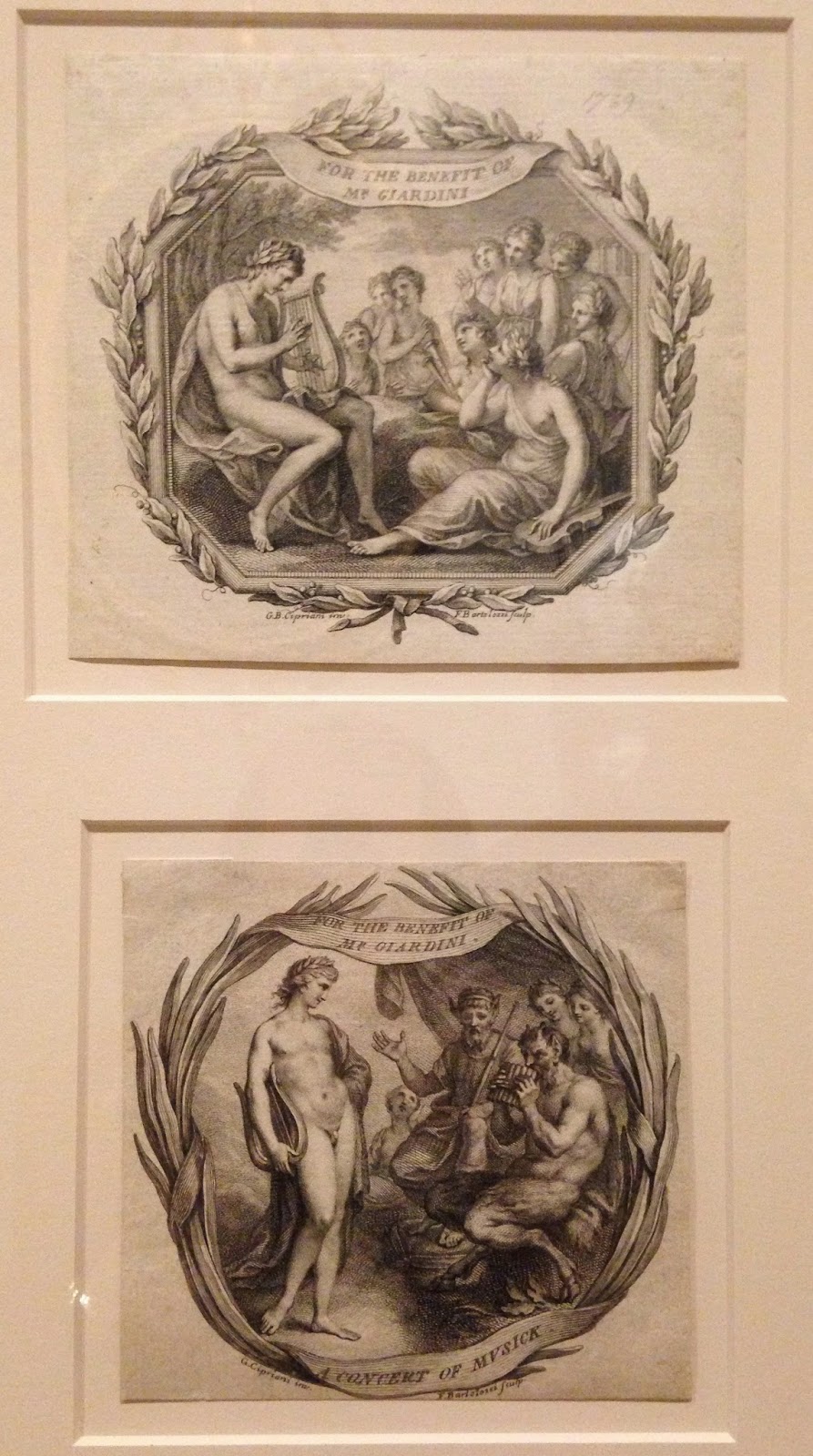 Another party invitation from the 1700s, this invites you to a musical event. The pictures show the famous music contest between Apollo and the satyr Marsyas. Marysas was stupid to challenge the god, because Apollo skinned him alive after the contest. Me, I’m not sure I would accept an invitation to a musical event with these pictures on the tickets. I prefer not to be skinned alive after a night at the opera. 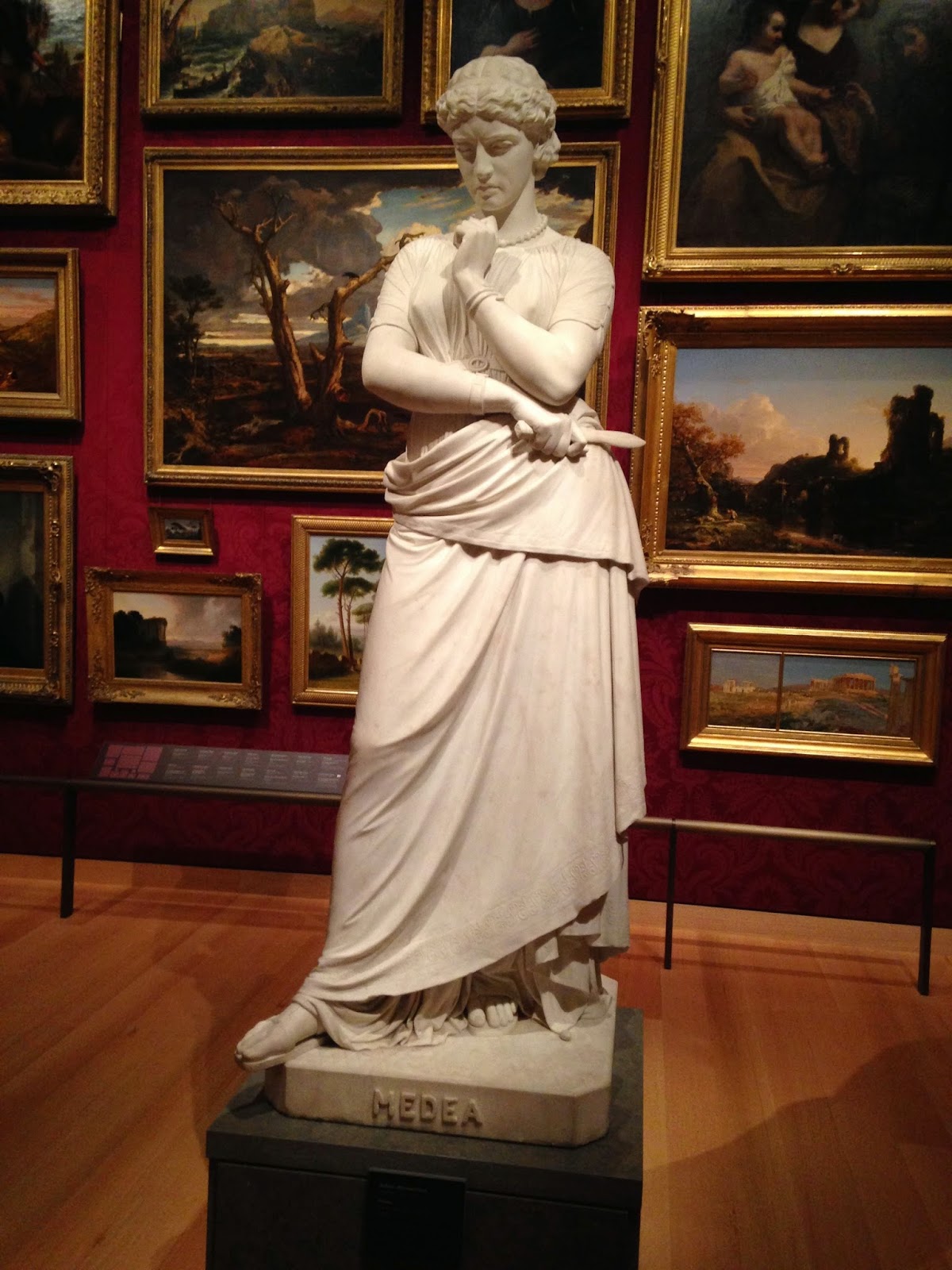 And finally, the sorceress Medea, looking very evil and scheming. Love the scowl. Love the knife. You can tell she’s going to do something wicked and nasty and magical. We left this room very quickly. And yes, I know, DON’T BLINK!

So that was our night at the MFA. Crazy how much mythology we found, and this wasn’t even the Ancient Greek section of the museum!