Especially when I’m busy writing, I find it’s very important to read a lot! Below are some of my favorite recent finds: 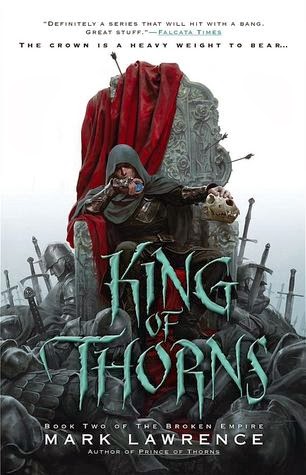 King of Thorns, by Mark Lawrence
I think this is my favorite book in an excellent trilogy, because the odds are so severely against our anti-hero Jorg. The stakes are high and the plot twists are perfect. Having killed his uncle and secured a small kingdom in the mountains, young Jorg now faces a powerful, charismatic enemy – the Prince of Arrow – who seems destined to unite the Broken Empire. The action jumps back in forth in time, from the siege of Jorg’s capital to several years before, showing us how Jorg traveled the empire and gathered his resources to fight a seemingly impossible battle. We also see part of the story from the viewpoint of Katherine, the woman Jorg wants more than anyone, and the woman he is destined not to have. Though Jorg continues to be the most Machiavellian of protagonists, not hesitating to kill, maim or destroy if it serves his goals, we come to understand him more in this book, and it is impossible not to cheer for him. He is a refreshing, brutal wind, blowing away all the romantic trappings of high fantasy – chivalry, honor, good versus evil, and faith in a higher cause. Sometimes, when you see that white knight riding by with his armor gleaming and his smile flashing, you just want to pull him off his horse and punch him in the face for being too perfect. If you’ve ever had that feeling, Jorg is your man. 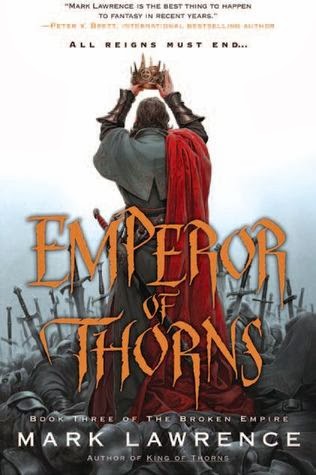 Emperor of Thorns, by Mark Lawrence.
A wonderful, surprising, and worthy ending to the Thorns trilogy. If you’ve followed Jorg Ancrath through the first two books, it shouldn’t shock you that Jorg does not give you the ending you might expect, but it’s an ending that makes perfect sense. As with the past two volumes, this book jumps around in time, from Jorg’s journey to the seat of the empire to vote for a new emperor, back to his earlier journeys through Hispania and Afrique in search of power and answers. Looming on the horizon is the Dead King, a mysterious force who has raised armies of the dead and bent powerful necromancers to his will. Eventually, Jorg will have to face both the Dead King and the other players in the internal struggle for the throne of the empire. How he manages this . . . well, let’s say he employs his typical Jorgian style and panache. There will be blood. It was hard to say goodbye to Jorg and his story, but I’m anxious to read Lawrence’s future books set in the Broken Empire. Highly recommended. 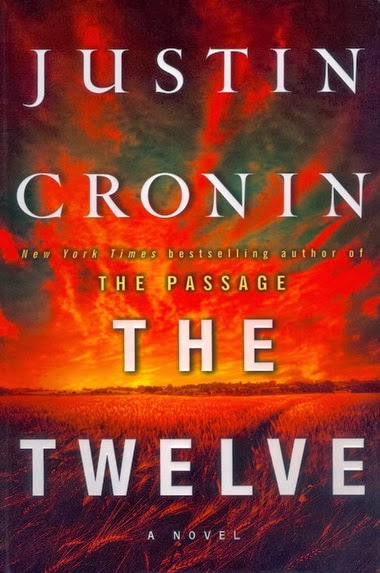 The Twelve, by Justin Cronin.
Cronin’s first book in this trilogy, The Passage, received a lot of buzz. The Twelve is the second. The trilogy tells the story of an engineered virus that creates a race of vampires – “Virals” – which almost wipe out humanity. The writing is strong, the characters are sympathetic, the post-apocalyptic world Cronin describes is terrifying and believable. The reader does have to have some patience, as Cronin tells the story in several parts that at first seem only loosely connected. Just when you are completely riveted in the story of the outbreak, he flashes forward seventy-nine years, where you have to learn to care about a whole new set of characters in an entirely different situation. If you can stick with it, though, the parts do create a satisfying coherent whole. I had a little trouble getting into the rhythm with The Passage, but found The Twelve a quick, compelling read, since I was now accustomed to Cronin’s narrative structure. I will certainly be anxious to see how he wraps up his trilogy in the third volume, due out later this year. If you like Stephen King’s The Stand, check out this series. 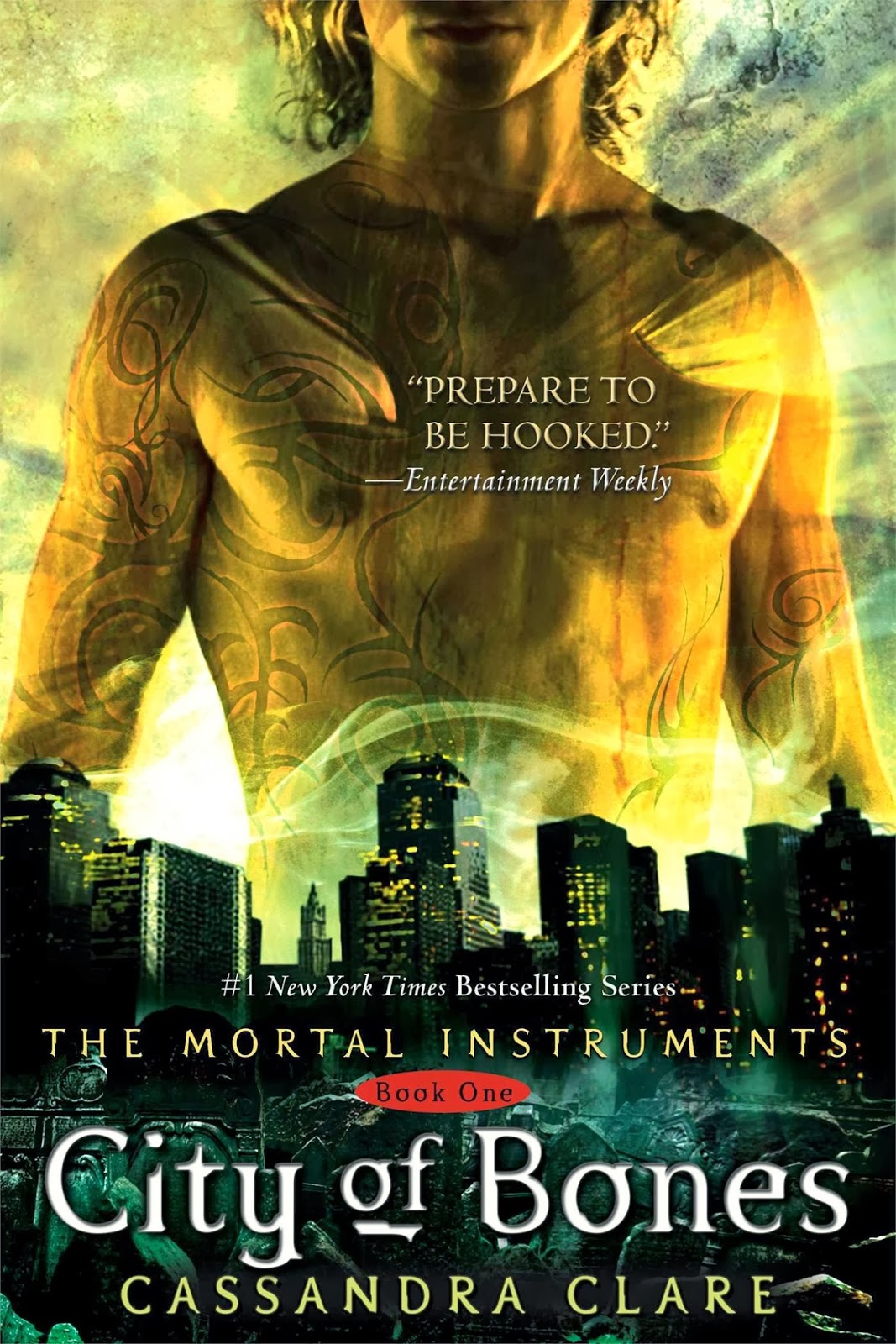 The Mortal Instruments: The City of Bones, by Cassandra Clare.
Okay, so I’m far behind the curve on reading this, but I very much enjoyed my introduction to the world of nephilim, Shadowhunters and demons. Clare constructed a vivid, believable parallel world with great characters, punchy dialogue, and a winning mix of humor, pathos and action. I like her take on warlocks, vampires, and werewolves, and of course I’m a big fan or urban fantasy, where these fantastic elements mix into the regular gritty city life of New York. Clary Fray is a sympathetic protagonist, though I was equally drawn to the supporting cast. I especially like that the villains are believably three-dimensional. Even when you do not support them, you understand what motivates them. There is no easy black and white, good and evil dichotomy. I’ll be interested in seeing where the series goes from here, and what Clare does with her Victorian prequel series The Infernal Devices. 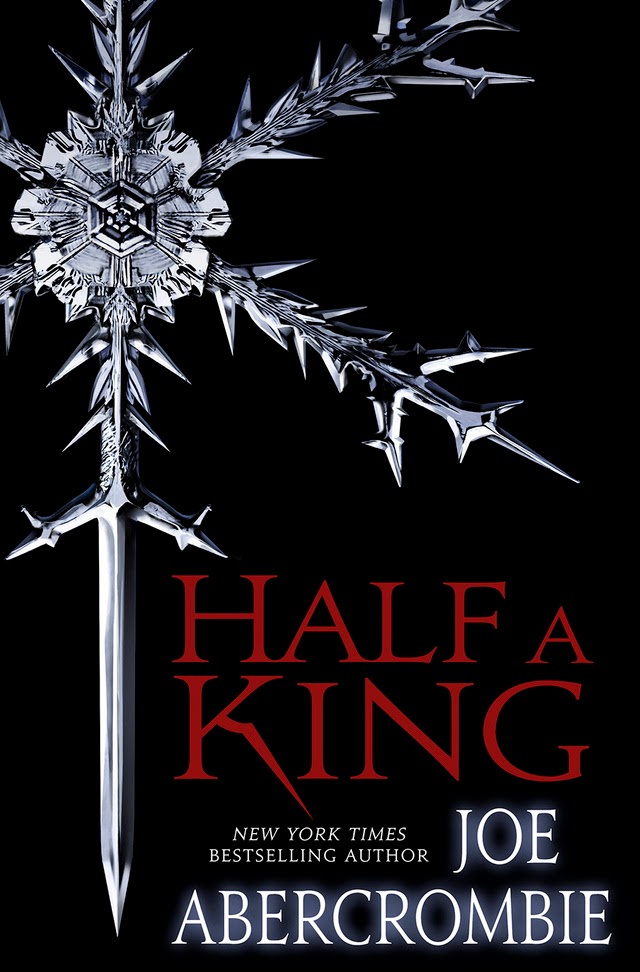 Half a King, by Joe Abercrombie.
I’m a big fan of Abercrombie’s stark gritty fantasy books for grown-ups. His fiction pulls no punches and takes no prisoners (unless those prisoners are later tortured and executed). So I was curious to see how he would approach the world of young adult fiction in Half a King. The answer: brilliantly. Abercrombie creates a fantasy world that is somewhat neo-Viking, set around the Shattered Sea (the Baltic and North Atlantic?) ages after the elves (21st Century man?) shattered god (Blew everything up?) and disappeared. Our protagonist, Yarvi the youngest son of the king of Gettland, was born with a deformed hand in a world that values only able-bodied warriors. He is prepared to spend his life in the Ministry, as a sort of combination priest/physician/royal advisor, but his plans are upended when his father and older brother are both killed in an ambush. Suddenly Yarvi must be king and avenge his family, but very few Gettlanders are prepared to have ‘half a king’ – a weakling with only one good hand. Without giving any spoilers, I can tell you that Yarvi will have to endure many hardships and many adventures before he can find his true destiny. As in all Abercrombie’s books, friends turn out to be enemies, enemies turn out to be friends; the line between good and evil is murky indeed; and nothing goes quite as we expect. Abercrombie also throws in his trademark dark humor and got me to laugh even during some grim scenes. With eye-popping plot twists and rollicking good action, Half a King is definitely a full adventure. I was lucky enough to read an advanced copy of the book. When it’s published in July, be sure to check it out! 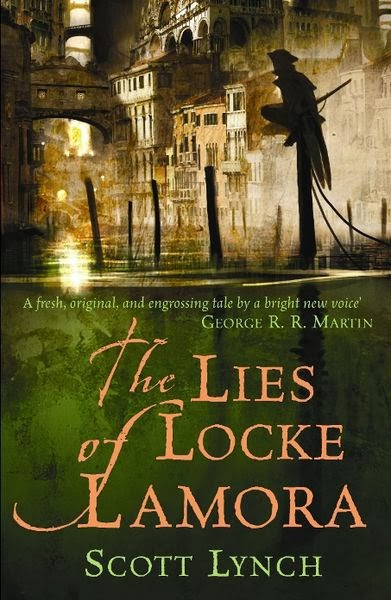 The Lies of Locke Lamora, by Scott Lynch.
Another great fantasy, this novel follows a talented rogue and conman, Locke Lamora, through his adventures in Camorr, a city loosely patterned after Venice, but set in a world where humans have built their society over the ruins of a much older race called the Eldren. Locke rises from an orphaned beggar to become one of the most wanted thieves in the city, and along the way makes some enemies in very high places – the Duke’s head of secret police, ‘the Spider,’ the capa of the city’s underworld (who doesn’t approve of targeting the city’s nobles) and a new player in town, the Gray King, who has his own deadly agenda, along with some unbeatable magic backup. Lynch’s world is so vivid and fully formed that the reader feels as if he’s been dropped into the crowded bazaar in an exotic city and left to find his way out. At first, this can be overwhelming. Everything is different: the days of the week, the gods, the geography, the slang. On top of this, Lynch jumps back and forth in time from Locke Lamora’s past to his present. I confess I got bogged down at the beginning and had to come back to this book several months later. But if you keep going, the payoff is well worth the effort. Give it a hundred pages, and you’ll be hooked. If you like intelligent funny dialogue, clever protagonists facing equally clever antagonists, and vivid original world building, Scott Lynch is your guy. When I got to the end, I immediately ordered the next two books in this series.