I didn’t plan to spend this fall reading World War II-themed books, but that’s how it turned out. First I became engrossed in Rick Atkinson’s excellent non-fiction “Liberation” trilogy covering the war in Western Europe. Then I moved on to a middle grade novel and a young adult novel that both take place in the same milieu. 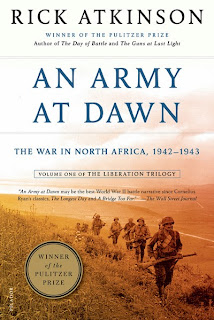 First up, Atkinson’s An Army at Dawn covers the 1942-1943 war in North Africa, from the initial Allied invasions to the drawn-out siege of Tunisia. Like all great history books, this one reads like a cracking good novel. Atkinson brings his characters to life, from Supreme Commander Ike Eisenhower to the soldiers on the front line, using personal diaries, letters home, and declassified official accounts. He evokes the North African terrain in vivid detail and really makes the reader feel as if he or she is on the ground with the troops. His vignettes are by turns touching, terrifying, and absurdly funny — such as the time Winston Churchill is found wandering along the North African beach, serenading random soldiers, until challenged by an American sentry who calls up headquarters: “Hey, there’s a drunk guy down here singing to us. He says he’s the prime minister of Britain.” The main impression I came away with was just how poorly prepared the U.S. military was for the war they faced. In many ways, North Africa was a training ground for bigger battles to come in Italy and Normandy, and it’s a very good thing the Allied troops started in Africa, rather than launching straight into an invasion of France, as many American commanders were advocating. This is a long, detailed book covering lots of ground (both literally and figuratively) but it’s first-rate writing about an important campaign that forged the Allies into an effective fighting force. 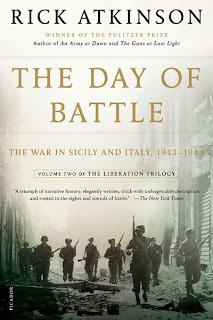 The follow-up to Atkinson’s An Army at Dawn, The Day of Battle covers the Allied invasion of Sicily and Italy from 1943-1944. I knew little about this front, as it often gets eclipsed by the later invasion of France. It was fascinating to follow the internal struggles between the American and British — Churchill relentlessly insisting they rip out the ‘soft underbelly’ of Axis Europe, which proved to be none too soft — while the Americans saw the Mediterranean as a sideshow, taking valuable resources away from the Pacific and the eventual invasion of Normandy. Several characters steal the show in Atkinson’s book — especially George Patton, the brilliant but irascible commander who hits some of his hospitalized men for claiming they have shell shock (what we now call PTSD). Patton yells at the soldiers, calling them cowards and denying that shell shock is real, which gets him in a lot of hot water, though the incidents are hushed up for some time. I was also struck by Atkinson’s descriptions of the front line troops at Anzio, living in misery and constant danger on a narrow beachhead, incessantly bombed and challenged by German troops. As for the ill-conceived winter campaign through the Apennines, I could only wince and think, “No, don’t do it!” knowing full-well the troops would slog through and be killed by the thousands in the bitterest possible fighting. What struck me most was the bittersweet fall of Rome, which was immediately overshadowed in the press by the news of D-Day in Normandy. Even in 1944, the troops in Italy felt a sense of urgency, knowing they were fighting the ‘B-side’ of the war, and they had to accomplish their goals before they were forgotten. This is an under-appreciated, poorly understood part of World War II, and Atkinson does a masterful job bringing it to life. 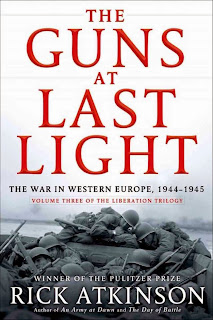 Funny thing about Atkinson’s writing. Even after reading two extremely long volumes in his Liberation trilogy, I was compelled to jump straight into the third and final book as if I was desperate to find out the ending of the series.
Of course I knew the ending. The Nazis lose. Hooray! The Guns at Last Light covers the most famous part of the war in Western Europe — from the landings at Normandy through the liberation of France to the eventual surrender of Germany.  Still, Atkinson is such a good storyteller that I kept turning pages, anxious to follow the course of events. His characters are as vivid as ever — from the everyman hero Audie Murphy to the colorful and impossible British Field Marshall Montgomery. I especially liked the tale of the Yalta conference between Stalin, Churchill and Roosevelt (shortly before the president’s death). We get a sense of the Cold War to come, and how much will be at stake once the Nazis are defeated.
Reading the Liberation trilogy, I felt as if I’d lived through the war one torturous month after another. It was heavy stuff, but wonderfully and vividly reported. If you want to know about the war in Western Europe, this series is about as close as you could come (or might want to come) to actually being there. 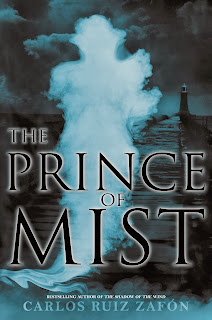 A big change of pace from my nonfiction reading about World War II, The Prince of Mist is a middle grade novel by acclaimed Spanish writer Carlos Ruiz Zafón. I’d read Zafón’s The Shadow of the Wind, a brilliant adult novel blending Gothic horror and magic realism, but I wasn’t aware that Zafón actually began his career writing middle grade fantasies. The Prince of Mist was his first book, and it did not disappoint.

The war in Europe plays only a background role in the book, much as it does in The Lion, The Witch and the Wardrobe. The Carver family decides to leave their urban home in Spain to escape the war. They move to a small beach town which has more than its share of secrets. Young Max discovers that their new family house was owned by a doctor and his wife, whose son drowned many years before. There is a strange walled garden behind the house, filled with creepy statues of circus performers. There is a shipwreck just off the coast, and a strange old man who runs the town lighthouse. The town clock runs backwards. Strange voices whisper in the house. Max and his sister Alicia soon meet a new friend named Roland, whose parents died in a tragic accident when he was small. Together, the three of them begin to unravel the mystery surrounding the town, which is entwined with an evil force from the past — an entity known as the Prince of Mist.

If you like quick, creepy reads with mystery and menace, The Prince of Mist is for you. It will keep you turning the pages, and probably leaving your lights on, late into the night. 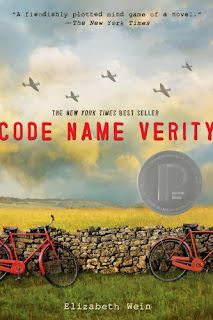 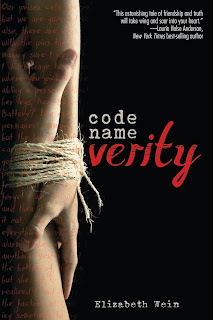 My final foray into World War II territory (for now, anyway) is Elizabeth Wein’s Code Name Verity, a young adult novel which really defies description, but I’ll try. At its heart, Code Name Verity is the story of two young British women, Maddie and Queenie (or Julie), who undertake a secret mission behind enemy lines in Occupied France in 1943. The novel begins as a confession being written by Queenie while being held as a prisoner of the Gestapo. Clearly, her mission has gone terribly wrong. Queenie has been captured, tortured, and forced to write her story for her interrogators, and while that story is fiercely compelling in itself, the more we read, the more we begin to sense that there is more to Queenie and her mission that we are being told. Without giving anything away, I can tell you that there are games within games being played here. The whole experience for the reader parallels what the characters are feeling. Who is telling the truth? Whom can we trust? Who is an agent, a double-agent, a collaborator, a spy? Wein clearly knows her subject matter, whether it is airplanes (the author is a pilot) or life during World War II. Her characters are so real they leap off the page. Maddie and Julie embody courage, pluck and humor even in the darkest of circumstances. By turns heartrendingly sad and fiercely uplifting, Code Name Verity is the best YA book I’ve read in a long, long time. If you like historical fiction, or spy thrillers, or just books that constantly surprise you with, “OH MY GOD, THAT’S WHAT’S GOING ON???” moments, you should really read this. (I include both versions of the US cover, as it has changed. Which do you like best?)