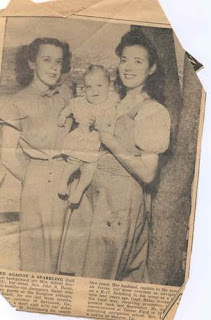 My mom sent this cool newspaper clipping yesterday, on what would’ve been my grandmother’s 100th birthday. That’s my grandmother Lillian standing on the right. Her sister, my great aunt Lula, is on the left. And that little baby is my mom!

I decided to post this because my grandmother was a huge influence on me, much like Frank Zhang’s grandmother in Son of Neptune, except my grandmother was a lot nicer. She would sing me songs like “Wild Blue Yonder” or “John Billy” as she swung me under the apple tree in her backyard. She made awesome Jell-O and ambrosia — a fruit salad with coconut shavings — and yes, that’s the first time I ever heard the term ‘ambrosia.’ When I was a kid reading Greek myths, I always pictured the gods sitting around eating my grandmother’s fruit salad.

Most of all, I remember my grandmother’s irrepressible optimism. Every time we got together, she announced, “This is the happiest day of my life!” And I think she meant it. I never heard her raise her voice. She only got mad at me once — I don’t remember what I was doing exactly, but I could be a cranky little so-and-so when I was a kid. She just frowned and told me I could go home rather than spending the night, and I was stunned. Grandmother’s patience had a limit? No way!

Most of the time, she was about as close to an angel as you can get. I doubt her life was as perpetually sunny as she let on. I’m sure she had her fears and doubts like everyone, but she was determined never to let those show to her children and grandchildren. She always looked on the bright side and praised us for the good we did while downplaying the bad. As my Uncle Rees liked to joke, “If I ever got arrested, she would’ve assured me I was the best prisoner in the whole jail.”

Whenever I need to create a strong, supportive, positive adult figure in my stories, I think about my grandmother. You can see traces of her in Sally Jackson, Tawaret and Ruby Kane.

I often regret that my grandmother didn’t live to see me get published. Still, I know exactly what she’d say: “You’re the best author in the whole world!” We all need someone like my grandmother in our lives, cheering us on and convincing us that we can succeed. I doubt I would’ve taken the risks I did if my grandmother’s voice hadn’t been in my head, telling me that anything was possible. So thanks, Grandmother, and happy 100th! I hope you’re up there enjoying divine ambrosia under the boughs of an apple tree and eternally sunny skies.