As usual, my recent reads have been an eclectic assortment, but all wonderful stuff! 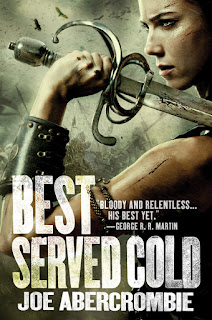 First up: adult fantasy Best Served Cold by Joe Abercrombie. I loved Abercrombie’s The First Law trilogy, set in a richly realized fantasy world with a great cast of characters. I’m usually hesitant to read standalone fantasies like Best Served Cold. I prefer series so I can get to know the characters over a longer time, but I was eager to revisit Abercrombie’s world so I picked up Best Served Cold, and I’m glad I did. When mercenary general Monza Murcatto is brutally betrayed by her employer, she decides to take revenge against all odds, regardless of the consequences. Sounds like a simple plot, but nothing is simple about the way the story unfolds. Loyalties change, good and evil become increasingly hard to distinguish, friends become enemies who become friends again. The relationships and turns of fortune are every bit as punishing and convoluted as Game of Thrones, and I mean that as a compliment. Abercrombie makes you care about each character, no matter how flawed they are. It was also great to see old acquaintances from The First Law series pop up here and there in this book. If you’re looking for an engaging story with epic adventure, plenty of violence, and characters who are three-dimensional (at least until the author puts them through the meat grinder and they come out flattened!) definitely check out Abercrombie’s work. 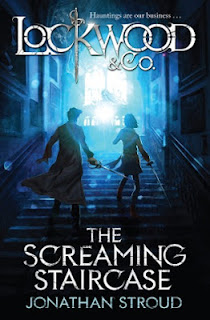 My YA recommendation of the month — which is not really fair since I read the ARC and it doesn’t come out until September — is Jonathan Stroud’s Lockwood & Co.: The Screaming Staircase. You may be familiar with Stroud’s earlier series about the genie Bartimaeus, and like Bartimaeus, Lockwood & Co. offers us an alternate modern England — a brilliantly rendered world in which “the Problem” has inexplicably caused ghosts to run rampant and disrupt the lives of mortals. In this new reality, private agencies have arisen to combat the supernatural, and they rely on children as their operatives, since only their senses are keen enough to detect and combat ghosts. After a horrible accident in her home village, Lucy Carlyle flees to London where she joins a small struggling agency, Lockwood & Co., headed by the young and dashing (possibly too reckless) Anthony Lockwood. Soon they are embroiled in a mystery that may cost them their agency and even their lives. Ancient evil, unsolved murders, powerful ghosts and nefarious mortals — this story will keep you reading late into the night, but you’ll want to leave the lights on. Stroud is a genius at inventing an utterly believable world which is very much like ours, but so creepily different. Put The Screaming Staircase on your ‘need to read’ list when it comes out in September! 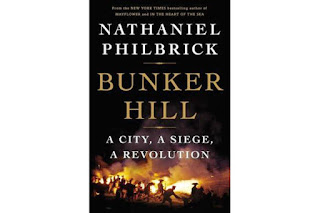 My nonfiction of the month . . . well, I used to teach American history, and I just moved to Boston, so naturally I had to check out Nathaniel Philbrick’s Bunker Hill. An engaging look at the characters who contributed to the earliest events of the American Revolution, Bunker Hill recaptures the 1770s and reminds us that the Revolutionary War was anything but certain, and the outcome of such a war was not at all predestined. So many things could have changed the course of history, and Philbrick ’embeds’ us with the colonial militia and British forces for a close-up look at just how chaotic things got. I especially loved learning about the bizarre details of Boston in those times: the Pope Day wars between the North End and South End (imagine a very rowdy game of capture-the-flag), the cows who fought with the British soldiers over the Common, since that was where the herds usually grazed, the way George Washington looked on his Continental troops with disdain and disgust, and had to master his own emotions before mastering his army. If you like history, this is a fast, riveting read! 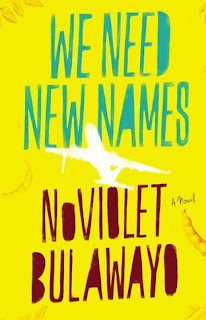 Hard to say what drew me to this book — the author’s name is just awesome. The cover is eye-catching. The reviews have been stellar. Also, I’ve long been interested in the painful history of Zimbabwe (once British colonial Rhodesia) since I tried to figure out how to teach this hugely complex subject and do it justice in my middle school social studies classroom. (I can’t say that I ever really succeeded.) Bulawayo writes a searingly beautiful story — a fictionalized memoir — about a young girl Darling growing up in a Zimbabwean shantytown called Paradise. The words Zimbabwe and Mugabe never appear in the book, which somehow makes the sense of place and the menace of the president all the more real. Bulawayo is brilliant at showing us Zimbabwe through the eyes of ten-year-old Darling and her friends. Even the most horrifying and heart-wrenching scenes are leavened by the children’s incredulity, defiant mischievousness and bursts of humor. The language is simply beautiful — fresh, genuine, evocative. Most impressively, Bulawayo keeps the narrative just as compelling when (sort of a spoiler, but not really) Darling moves to America halfway through the book. This would be a natural place for a book to lose steam, changing settings after such a vivid first half, but Darling’s story remains riveting, and we see America afresh through her eyes. What does it mean to be American? To be African? Where does Darling belong and what is ‘her country’? The book offers no easy answers. That would be impossible. But with immigration a hotter political topic than ever, We Need New Names offers us a wonderful, intensely personal perspective on what it means to be an immigrant in modern America. Highly recommended for high school and above, and the scene which gives the book its title . . . wow. So poignant I can’t do justice describing it, so I won’t try. But you’ll see when you read it.