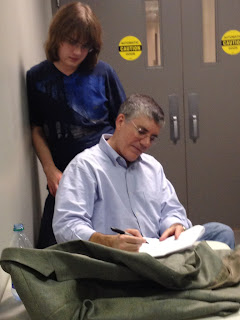 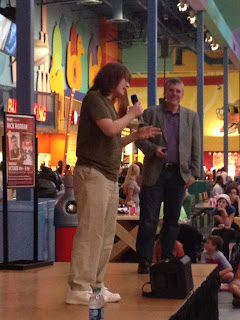 It’s been a great tour so far! We started in Paramus, New Jersey with an event at Barnes & Noble. Two very full rooms of people waited patiently and were super excited! Best question of the night: If Riptide actually wrote as a pen, what color would the ink be? I thought probably something boring, black or blue, though Haley suggested bronze, which makes sense!

From New Jersey, it was off to Toronto for an event with Indigo. We took over a local movie theater and filled the place with enthusiastic fans. The picture at the top shows me revising my notes with Haley keeping a watchful eye and suggesting cuts. He’s along with me on this tour for the first time because he has a career-shadowing assignment for school, and he wants to learn to author’s job. Yep, that’s right. He’s getting credit for going on tour. Pretty cool, huh? The Canadian crowds are always awesome, but the best question of the night came from a sweet little girl who couldn’t have been more than seven. She asked what would happen if the wolf Lupa ever got caught. Now that would be an amazing story! Apparently the little girl is an aspiring writer, and I told her she should try her hand at writing that tale.

Last night, we did an event for Books-a-Million at the Concord Mills Mall in Charlotte, NC, right in the middle of the food court. Tons of people, great frozen yogurt, music and video monitors all around me, a carousel on one side . . . I felt like an act in a three-ring circus! It was a little chaotic to say the least, but I think everyone was able to hear me, and the questions from the crowd were fabulous. I asked their opinion on combining Kane and PJO, because I was afraid all those gods together would be too confusing, but the North Carolina readers gave the idea an enthusiastic yes. I guess I’ll have to think more seriously about that for the future. Haley also came on stage and said a few words about his story in the Demigod Diaries — “Son of Magic.” It was his first public appearance, and everyone was super nice to him. I could not have stood in front of a crowd like that when I was eighteen. Yikes!

I’m so glad to hear you all are enjoying The Mark of Athena. Yes, I DO consider that ending a cliffhanger, and sorry, but you know me by now; that’s the way I roll. (Or troll, as some of you would no doubt say.) I’m working hard on book four. It really will take a full year to write. Sorry about the wait, as always, but getting the story right is important to me, and I know it’s important to you. I’ll do my best to make it worth the wait!