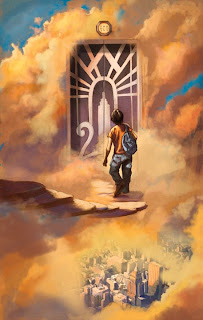 As fans know, August 18th is Percy Jackson’s birthday. How old is he now? Still sixteen! That’s the advantage of being fictional. You don’t age on the same timeline as real people. Percy will still be sixteen (for a few more weeks, anyway) in the upcoming Mark of Athena.

Out here in the real world, however, there’s no reason we can’t celebrate! I’ve got two little treats for you, compliments of the fine folks at Disney-Hyperion, my publisher. First, a Demigod Creator, a Facebook application that lets you download a custom worksheet and create your own demigod character. These creations can then be uploaded to a gallery on the Percy Jackson Facebook page (over 1.4 million likes!) where your fellow fans can vote or “+1” them. The entries will be posted here. (You may have to approve the app on your Facebook account.)

Second, it’s time for our first character art reveal for The Mark of Athena! This is really exciting, because once we start the character art, I know the publication date is getting closer. We’ll be treating you to a new picture each week from now until pub day, October 2. 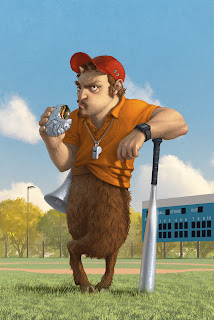 Every time I see the picture, I laugh, because it’s exactly how I pictured him. You will see the coach again in The Mark of Athena. He’s along for the ride on the Argo II, ready to use that baseball bat on monsters, or demigods, or pretty much anything that moves.

Be sure you enjoy some blue food for Percy’s birthday! I’ll be back next week with another character art reveal.