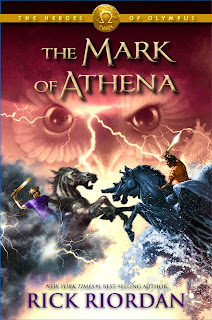 Well, John Rocco has done it again! Above is his fabulous cover art for The Mark of Athena. It was revealed yesterday in Publishers Weekly. If you missed the interview, you can read it here.

What is the scene on the cover? Is that who you think it is, about to fight??  Can’t tell you, but yes, that is an actual scene from the book, and the meaning will be clear when you read it. Very soon, Disney will be launching a new site, GreeksvsRomans.com, which will let you choose your side — Camp Half-Blood or Camp Jupiter. More on that soon!

The first chapter is now available on Disney’s Heroes of Olympus website. The book will be released Oct. 2, 2012. Why the wait? Well, ya know,  proofreading, typesetting, proofreading again, printing (or formatting separately for each e-version) final revisions, etc. It takes a lot to make a book, and we want it to be as polished as possible when you read it.

Tour dates won’t be announced for quite some time, probably about a month before the release date. I’ll keep you posted. In the meantime, I hope you enjoy the cover and the sneak preview. Also, to whet your appetite, we’ll be releasing The Demigod Diaries, a new collection of Heroes of Olympus and Percy Jackson stories, on August 14! 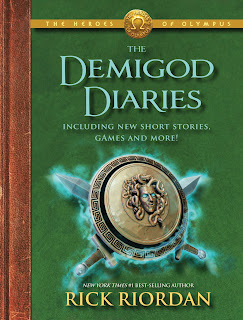