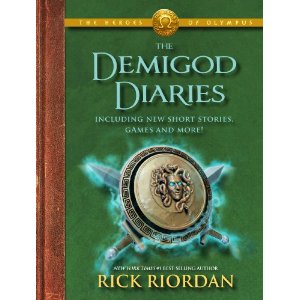 Only two months left until the Demigod Diaries arrive on August 14!

And here, to give you a taste of what’s to come, is the beginning of Percy Jackson and the Staff of Hermes. All you Percy/Annabeth fans, waiting for a reunion in The Mark of Athena, this story will hopefully give you something to enjoy until Mark of Athena is published Oct. 2.

Annabeth and I were relaxing on the Great Lawn in Central Park when she ambushed me with a question.
“You forgot, didn’t you?”
I went into red alert mode. It’s easy to panic when you’re a new boyfriend. Sure, I’d fought monsters with Annabeth for years. Together we’d faced the wrath of the gods. We’d battled Titans and calmly faced death a dozen times. But now that we were dating, one frown from her and I freaked. What had I done wrong?

More to come on August 14, when the book is published. I hope you all enjoy The Demigod Diaries!