First, thanks to everyone who came out for The Serpent’s Shadow tour! I had a great time at the final events in San Antonio and San Marcos. The book is steaming along on the bestseller lists and I’m so glad for the positive feedback it’s received from readers.

After returning home I dove straight back into the revisions for The Mark of Athena. It’s going well, and the book will be released on schedule Oct. 2, 2012. Sorry for the wait, but it really does take that long to prepare a book for publication. I should be able to reveal the cover art in early June, so stayed tuned! Tour details for the book won’t be available until about a month before the release date.

It’s been a while since I’ve had the chance to comment on the books I’ve been reading. Lately, it’s been quite a mix. 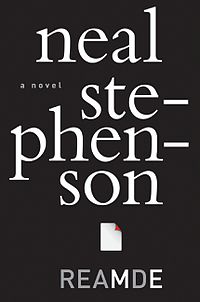 Reamde was the first Neal Stephenson novel I’ve read. I understand from Stephenson aficionados that it is somewhat different than his other work, but I found it a great point of entry to this author’s world. It’s a long book, over a thousand pages, and it did take some commitment to get into. Stephenson’s research is incredibly detailed, and his interests are myriad. The amount of information he presents could easily bog down the plot if his writing wasn’t so compelling and well-crafted. The plot zigzags breathlessly all over the world — from urban China to the backwoods of British Columbia — and the cast of characters is both quirky and compelling. The plot? Well, like most things in the book, it’s complicated. Basically, it involves an on-line hacking attempt to hold hostage the computers of gamers in the ultimate MMORPG, T’Rain. When the young Chinese hackers inadvertently lock down a computer belonging to the Russian mob’s accountant, things get interesting. You can expect gun battles in the wilderness, terrorist plots aplenty, Russian commandos, a tough heroine from the Midwest (and Ethiopia), gory deaths, lots of virtual gold, and a couple of wild animals. And really, that’s just scratching the surface. If Tom Clancy and Carl Hiaasen collaborated on a book, it might look a lot like Reamde. It’s a mix of deep and detailed background information, with a wild plot and even wilder characters. At the end, I felt like I’d run a marathon, but a marathon worth running, and I’ve already purchased more of Stephenson’s books. 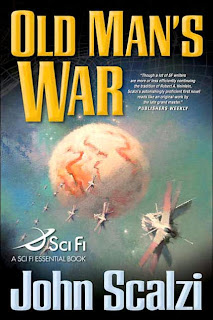 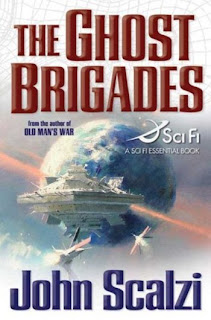 Another new author for me: John Scalzi. I love this guy! It’s been a long time since I sat down and read some straight-forward science fiction, and Scalzi seems to have a direct feed to the recorded consciousness of the late great Robert Heinlein. Old Man’s War introduces us to John Perry, a seventy-something earth man who has nothing to live for after the death of his wife, so he signs up for the army. You see, in the future, you can either die when you get old, or you can join the Colonial Defense Forces, get a new body designed for combat, and explore the galaxy protecting humanity. Only one problem: it’s a hostile universe, and your chances of survival are slim to none.  Scalzi’s story is addictively readable. His dialogue crackles and he balances just the right amount of humor and pathos to keep his characters real in a very unreal world. After finishing Old Man’s War, I went straight out and bought the sequel, The Ghost Brigades, which is every bit as good. I’m now starting in on book three, The Last Colony. I’m also very much looking forward to his forthcoming book in June, Redshirts, which is a send-up of Star Trek. You know, the guys in the red shirts always die. My older son Haley, 17, is reading this series along with me, and also loves it. Thanks, Mr. Scalzi, for some father-son geek bonding! 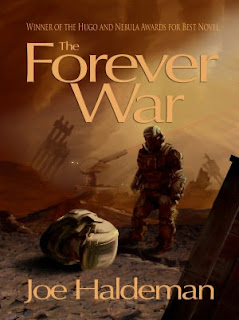 After reading Scalzi, I went back in time, so to speak, and read a sci fi classic that I somehow missed in my earlier years: Joe Haldeman’s The Forever War. The main character William Mandella is among the first recruits sent off to fight an alien species. The only problem? The distances are so vast that every faster-than-light jump means decades have passed back on earth. With each campaign that Mandella fights, his home planet changes until it is almost unrecognizable. As many readers have noted, Haldeman’s book is first and foremost a great novel of war and its effects on society. You can tell it was written at the close of Vietnam, as it speaks to the soldier’s dilemma coming home from a divisive conflict. Some elements of the novel haven’t aged as well as others. The idea, for instance, that sexual orientation can be determined by social conditioning is dated and comes across as a bit of a paranoid fantasy. But for the most part, the novel addresses timeless themes — isolation, alienation, patriotism versus skepticism, and the possibility of love in a violent, unforgiving world. The ending is haunting, and I found myself thinking about this novel for weeks after reading it. 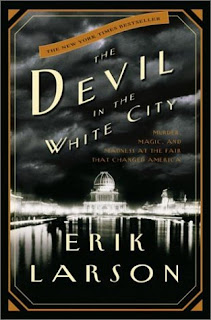 Talk about a change of pace! For my next book, I switched to nonfiction and went back to 1892 Chicago for the World’s Fair. Erik Larson is an amazing historical writer — one of those rare breed who can bring the past to life and make it seem immediate, fresh, intimate and amazing. The book is based on fact, but it reads like the best of novels, going back and forth between the team racing to put together the most important peacetime event in U.S. history, and a psychopathic murderer who is stalking the city at the same time, preying on young women with a cold efficiency that makes Jack the Ripper look like (excuse the pun) a hack. I had no particular interest in the Chicago World’s Fair, but Larson is a teacher who can make you forget you are learning. Anywhere he chooses to take you, you can be assured the ride is worth the price of admission. 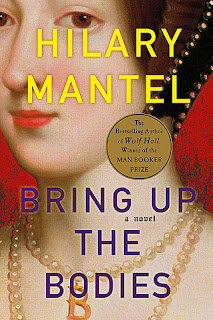 And finally, I was delighted to return to Tudor England with Hilary Mantel’s Bring Up the Bodies. I loved her first novel Wolf Hall about Thomas Cromwell, Master Secretary to Henry VIII, and this sequel about the fall of Anne Boleyn is every bit as good. Her writing is diaphanous — woven from the lightest bits of observation and dialogue, told in present tense, both immediate and translucent. I felt as if I were looking through a lace curtain, straight into the year 1536. How she does this, I’m not sure, but she brings Thomas Cromwell to life in full and sympathetic detail. If you enjoy historical fiction, especially about Tudor England, this is a must-read.

That’s most of my reading since I last reported. You’ll notice I’ve been sticking mostly to adult fiction and nonfiction, but I have several YA and middle grade novels on my to-be-read pile. I’ll keep you posted on those.

In the meantime, happy reading!