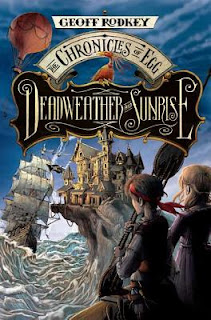 I just finished reading the advanced copy of a great book that’s coming out next month: Deadweather and Sunrise by Geoff Rodkey. I ripped through it in one day, which is really fast for me, and if you like adventure novels, I highly recommend you grab a copy when it is published.
The best way I can describe it is Lemony Snicket meets Pirates of the Caribbean, with a sprinkling of Tom Sawyer for good measure. That’s not really an accurate description, because this debut novel isn’t exactly like anything else I’ve read, but it gives you an idea of what awaits.
Pity our poor hero, thirteen year-old Egg Masterson, who lives on a miserable island with bad weather, a volcano, and lots of pirates. His family runs a small plantation where his father grows ugly fruit (“like a boring orange”). His siblings are named Adonis and Venus, while poor Egg was dubbed Egbert. His mother died giving birth to him. His brother and sister hate him. His father is neglectful at best. His tutor is fat, lazy and stupid. His only entertainment is reading the few books his tutor owns and climbing trees so he doesn’t get beat up by Adonis.
Then one day, Egg’s father comes back from the volcano with a piece of parchment and a baffled look on his face. He packs up the family and they sail for the nearby island of Sunrise for a mysterious errand. That’s when things become very interesting for Egg, very quickly.
Egg is a brave, likable and honorable character, and the reader will be cheering for him all the way. We’ll also meet the beautiful and plucky Millicent, the ferocious one-handed cabin boy Guts, and a whole cast of villains and scoundrels, most of whom are not what they appear to be. You can expect ancient Native treasure (possibly magical), pirate battles aplenty, wild hogs, jelly bread, fights to the death with biting and cannonballs, croquet, the very first boatload of obnoxious tourists, and even a wagonload of grenades. Best of all, Deadweather and Sunrise is the first of a series, and once you’ve read the first book, you’ll be dying to find out what happens next for Egg and the gang. I know I am!
This is a rip-roaring debut. It will be published May 29, so be sure and check it out!