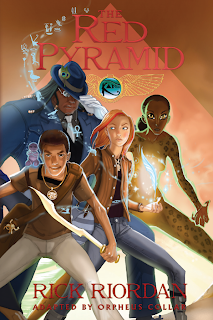 Check it out! The cover has just been revealed for The Red Pyramid graphic novel, which will be released October 2. I’ve seen the adaptation, and I can promise you it’s awesome. After all, the talented Orpheus Collar oversaw the project. How can a mythology graphic novel by a guy named Orpheus be anything but awesome? Hope you guys enjoy it when it comes out!