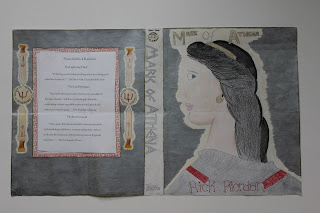 Thanks to Bisma of Glenview, Illinois who designed this cool cover for Mark of Athena! It’s not the actual cover, of course — that hasn’t been designed yet — but I always love seeing what fans come up with.

For those waiting for Mark of Athena news, it will probably be the end of May or June before we reveal anything — cover, sneak peeks, etc. We like to focus on one book at a time, so The Serpent’s Shadow is up first in early May. After that, we’ll get back to you on all matters Heroes of Olympus. Never fear though, I’m hard at work on Mark of Athena, though there is still much to do. Fingers crossed, it should be released on time this fall, but there is absolutely no chance it will be released earlier!