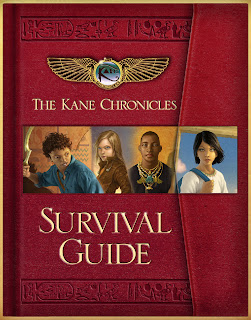 What’s inside? Here’s the official description:

I have seen the final product, and it is awesome. The book will provide tons of information on Ancient Egypt, the Egyptian gods, and the people and places featured in the Kane Chronicles. There are lots of brand new, full-color illustrations. If you enjoyed the Percy Jackson Ultimate Guide, then you will have an idea what this book is like. Hope you guys enjoy it!

Kane Chronicles Book 3 — I’ve finished the manuscript and it is now in the editing process. The book will be out on time, May 2012. I can’t tell you the title yet. We will announce that, reveal the cover and give you the exact release date in a few months, probably in January. Stay tuned for more info.

Heroes of Olympus, Book 3: The Mark of Athena — I am hard at work on this book right now. It will take one full year to write and publish it, but it will be out on time in the fall of 2012. I’m afraid that’s the absolute fastest it can be released (assuming you guys would like the book to be good!). It will be a while before we announce any further information about this title — probably next summer, after the Kane 3 tour.

And thank you to my amazing readers for continuing to support the books and recommending them to your friends.The Son of Neptune is still rocking along on the bestseller list, celebrating four weeks at #1 on the New York Times children’s chapter book list. The Lost Hero just passed fifty-two weeks, one full year, on the same list!

As I get more information on the future titles, I will post it on the blog. But for now, it’s back to writing!