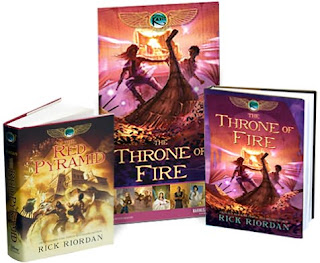 Thank you, readers, for being so supportive of the Kane Chronicles! Book #2, The Throne of Fire, has returned to the #1 spot on the New York Times chapter book list, making this fourteen consecutive weeks as a bestseller. Meanwhile, The Red Pyramid is about to come out in paperback next week, so it has moved off the chapter book list, but it enjoyed an incredible sixty-five week run on the bestseller list — its entire time in hardcover!

After the five-book Percy Jackson series concluded, I was worried readers would not follow me into any other new worlds I created, but you guys have given the Kanes a warm and generous vote of approval. Don’t worry — the Kanes will be back in volume three in 2012. More information on that this fall.

Meanwhile, The Heroes of Olympus series is also roaring along. The Lost Hero remains on the chapter book bestseller list after forty-three straight weeks, and book two, The Son of Neptune, comes out in just under two months, on Oct. 4! More about that very shortly.