Even in the midst of frantic writing, I have to read! It recharges my batteries and lets me know what’s happening in the world of books.
Two novels I recently finished: 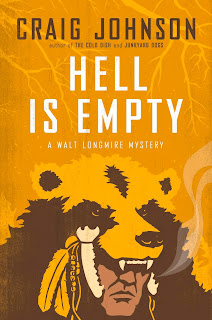 Hell is Empty, by Craig Johnson. The latest in a series about Wyoming sheriff Walt Longmire, this is the first Johnson novel I’ve read, and the first adult mystery I’ve read in quite a while. I’m not sure what attracted me to the book – probably the title, and the premise of following a psychotic killer into the wilderness. Hey, we’ve all been there, right? Normally I’d start a series at the beginning, but I had no trouble following the action. I like Walt Longmire’s character. He’s a widower, a father, an older man who can’t always chase down the crooks like he used to – and yet he treks into the freezing Big Horn Mountains alone rather than waiting for backup to save two hostages who have been abducted by a fugitive prisoner. Walt’s a good man and a good narrator, and although most of this book is Walt adventuring on his own, I can tell he’s got a great cast of supporting characters. Vic, Omar and the Cheyenne Nation (yes, that’s a character) are my favorites. Even characters that were created for this volume alone really pop.
Johnson knows his territory. He writes vividly and lovingly about Wyoming. I’ve never been there, but now I can picture it clearly. This is one of those books that lets you travel in your imagination. There is a fair amount of mysticism in the story – or ‘woo-woo’ if you wish. The book is overtly designed to parallel Dante’s Inferno, right down to the Native American guide Virgil who helps Walt through the mountains. We’re not always sure what Walt is seeing and what he is imagining. Are there spirits at work, or is Walt suffering from his head injuries? These elements didn’t bother me, but it’s not everyone’s cup of tea, so I thought I’d mention it. As for me, I really enjoyed my time with Walt and will definitely be buying the earlier books in Craig Johnson’s series. If you’re a mystery fan, check them out! 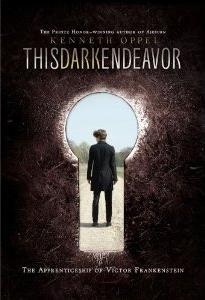 This Dark Endeavor, by Kenneth Oppel. I don’t often request an advance reading copy of a book. In fact, I’m usually declining ARCs because I’m offered more than I could possibly read. However, when I heard about Oppel’s latest project, a prequel to Mary Shelley’s Frankenstein, I immediately asked if I could read an advance copy, and I was lucky enough to get it.
I’m a big fan of Oppel’s previous series that began with Airborn. I’m also a fan of the Romantics, like the Shelleys. It’s no coincidence that Percy Jackson is named Percy. Short for Perseus, yes, but Percy Shelley, who was enamored with Greek myths and wrote extensively about them, also liked to fancy that his name was derived from the old Greek hero. In one letter, his wife calls him “my own Perseus.” But I digress . . .
For many years, I’ve thought the Frankenstein story was ripe for retelling as a YA novel. It’s one of those ideas that I toyed with but never had time to pursue. I’m very glad Oppel beat me to it, because he does it beautifully.
This Dark Endeavour introduces 15-year-old Victor Frankenstein. Oppel has taken the liberty of giving Victor a twin brother Konrad, and while you may be thinking, ‘oh, lord, not the old twin brother plot device,’ it works well in this book and comes across as fresh and perfectly plausible. In fact, it’s vital to the story. When Konrad falls ill, Victor is driven to find a cure, even if that means turning to the forbidden secrets of alchemy. And so, from the best of motives, a dark obsession is born – to unlock the secrets of life and death.
There is much more to the story, though. Victor’s search for ingredients sends him and his friends on many harrowing adventures. I won’t give any spoilers, especially since the book isn’t out yet, but I can tell you this is a true page-turner.
Most importantly, there is Elizabeth, the distant cousin of the Frankenstein family – a spirited, fiercely independent young woman, devoutly Catholic, beautiful, headstrong, and drawn to both Konrad and Victor for very different reasons. It’s the love triangle between these three multidimensional characters that really drives the narrative. There are no easy answers, no true villains and heroes. I found myself cheering for Victor, and yet hating him at times. Konrad comes across as noble, and yet insufferably perfect. Elizabeth is mercurial, yet perfectly true to her convictions. Oppel really brings them to life, which in a Frankenstein novel has many levels of meaning, I suppose.
The book explores faith and science, loyalty and hypocrisy, love and jealousy – all the things that young readers, and even older readers, struggle with. In his earlier work Airborn, Oppel updated the classic Jules Verne/Robert Louis Stevenson adventures and pioneered what would later be called ‘steampunk.’ In This Dark Endeavor, Oppel has reinvented the gothic thriller for modern readers. The narrative crackles with tension, emotions run high, and the atmosphere is perfectly dark and brooding. The Shelleys would be proud. I definitely recommend you check out the book when it’s published August 23. I anticipate This Dark Endeavor will get a lot of attention, and rightly so.