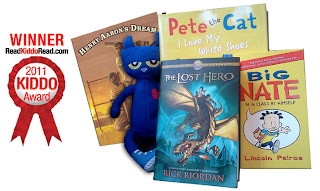 Thanks to everyone who voted in the Kiddo Awards on James Patterson’s Read Kiddo Read website! I just learned that The Lost Hero won the 2011 award for the ages 10 & up category. As always, this is the kind of award that means the most to me, because it’s decided directly by kids — the audience I’m trying to reach! I’m very honored you guys liked the book so much. If you haven’t checked out the Read Kiddo Read site yet, you definitely should. They have some great suggested reading lists.

In other news, I’m afraid my last month has been boringly consistent. I’m still plugging away on the revisions of The Son of Neptune. The good news is I’m on track. The book is scheduled to be published in October, and it should be arriving on time. (No, not early. No chance of that!) We may have a cover and a sneak peek chapter to show you at the beginning of the summer, but I’ll get back to you when I know more for sure.
Kane Chronicles 2: The Throne of Fire is all done and being readied for printing. It comes out May 3. I will be doing a tour for it, but I don’t have details yet. As soon as I do, I’ll let you know. Next month, Disney-Hyperion will be releasing some new character art for the book (yes, folks, including Anubis) and I hope you like it!
Rick’s reading list: Right now I’m working my way through Patrick Rothfuss’s Wise Man’s Fear, a sequel to his debut The Name of the Wind. I’m so glad Mr. Rothfuss took his time on this book. I know how hard that can be with the many pressures to produce. His second book is every bit as fabulous as his first. This is a must-read for fantasy fans. If Charles Dickens were alive in the 21st century writing epic fantasy, it would sound like this. Rothfuss is one of those writers who raises the bar and the reputation of an entire genre when he produces a book.
This week is spring break in the Riordan house. We’re staying close to home since I have to write, but the weather in South Texas is great, and we plan on spending a lot of time in the swimming pool. If you’re traveling for vacation, stay safe and bring some good books.
Finally, let’s all keep the people of Japan in our thoughts. The magnitude of this tsunami tragedy is just horrifying. This is an excellent time to give what we can to disaster relief charities and remember that we really are a global community. We’ve got to help out our neighbors as we would wish to be helped.