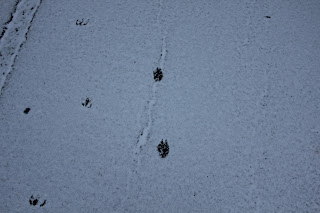 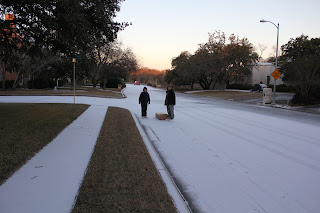 Strange to think that only a week ago we were dealing with snow. It’s been something like fifteen years since San Antonio last saw the white stuff, and the Riordan boys had a great time trying to figure it out. We had limited success with the cardboard sled Haley christened ‘the Big Shoe.’ He decided that he needed an oar, but he settled for a lot of pushes. Patrick had an excellent time making snowballs, most of which were aimed at me. We saw lots of animal tracks in the street, proof positive that we have deer, raccoons, possum, and armadillos in the neighborhood. The kids’ only complaint: they were already off school for a teacher in-service day, so they missed their chance at their first and probably only snow day.

All in all, it was a fun change of pace, though my heart goes out to those who have been buried in blizzards this winter. At least for us, the snow came and went in twenty-four hours. Now, thankfully, we’re back to sunny skies and temperatures in the sixties, which is about right for South Texas this time of year.

In other news, we recently made a deal to have the Percy Jackson series published in Iceland by the publisher Odinseye. How could I refuse an offer from a publisher with such a great name? By my count, that makes thirty-six foreign languages for Percy. The series continues to ride high on the bestseller lists in the U.S. and many other countries, thanks to you wonderful readers! Last week I also saw the first sketches for the graphic novel version of The Sea of Monsters, and I’m very excited. It’s going to look amazing. And I’m pleased to announce that Disney will be releasing a graphic novel version of The Red Pyramid in 2012. We’re in the very early planning stages, but I’ll keep you posted.

My next public events will be in May, for the Throne of Fire, Kane Chronicles #2. As soon as I have details of where I’m going, I will post them on my website. Remember, I don’t plan the tour myself. I just go where the publisher tells me, so apologies in advance if I’m not able to visit your city!

What am I reading? Let’s see. I just finished two great books by authors named Morris. The Rise of Theodore Roosevelt by Edmund Morris was a vivid, beautifully written biography. The descriptions of the Dakota Badlands were so good they made me feel cold and awestruck by the landscape, even though I’ve never been there. I could feel the suffocating heat and see the tropical colors of Cuba, and felt as if I’d personally charged up San Juan Hill with Teddy and the Rough Riders. If you like reading history, I highly recommend this book. I’ve now moved on to the next volume in Morris’s trilogy, Theodore Rex.

I also devoured The Squire’s Tale, by Gerald Morris, the first of a ten-book series based on Arthurian legends. Thanks to Elizabeth Bluemle, who recommended these books in her blog. I wasn’t familiar with them, and as usual, you can trust a good independent bookseller to steer you right! Morris weaves the legends of King Arthur into a fresh, funny narrative about Terence, the squire to Sir Gawain, and their adventures through medieval England, which is as colorful, crazy and comical as Alice’s Wonderland. If you’ve got a young reader who likes adventure stories with knights, magic, dragons, and wizards, you should definitely check out The Squire’s Tale. It’s a highly accessible, fun and easy read, and the best part – it’s the beginning of a ten-book series with all volumes already published. No waiting. Woohoo!

Next up on my fiction to-be-read list, The Pillars of the Earth by Ken Follett. I’m about a quarter of the way through and loving it so far. So many people have recommended this book to me, and I don’t know why I’m only now getting to it. I’m a sucker for the Middle Ages.

I don’t talk about books that I didn’t like, but I must mention that I read a very hyped e-book on my Kindle – or tried to read it. About a hundred pages in, I started wondering why it seemed so poorly written. How did this get past an editor? Then I looked at the Kindle site and realized it was published straight to e-book. Ah, it didn’t get past an editor because apparently it never had one. I will be more careful in the future to check the provenance of e-books. Don’t get me wrong. While I still buy a huge quantity of physical books, I love my Kindle and my iPad, too. They are great for travel especially. But publishers and editors do serve a vital role in shaping manuscripts and making sure they are ready for prime time. It’s possible to circumvent this process with the advent of e-reading, but that’s not necessarily a good thing for readers. Caveat emptor.

Finally, an update on The Son of Neptune. I have a complete manuscript and am working my way through the revisions. Understand: complete does not mean readable, not even close. I have a lot more polishing and reworking to do, and then there will be even more revisions once my editor goes over it, but I’m confident we’ll get it to you on time in October. When we have an exact release date, I’ll let you know. And nope – no hints. Sorry! It’s way too early for that.

I hope everyone has a good week. Keep reading!