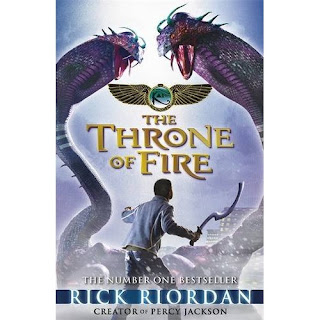 I just learned that The Red Pyramid has been shortlisted for the 2011 Red House Children’s Book Award in the UK! The award is voted on directly by young readers, and is organized by the Federation of Children’s Book Groups, a wonderful organization advocating for youth literacy in Britain. You can check out the shortlist and vote online here.

I was lucky enough to win the Red House Award in 2006 for The Lightning Thief, and feel very honored to have The Red Pyramid on the shortlist, especially since I drew on my own travels through the UK, visiting schools and talking with British children, to create the story. I also drew on my mother’s own backstory. Like Sadie Kane, my mom was an American girl who grew up in London, and she felt quite a bit of cultural confusion when she finally moved back to the States! I hope young readers in the UK will enjoy Red Pyramid, and its sequel The Throne of Fire when it comes out in May. And just in case you’re wondering, yes, those are the UK covers above. Same books, different looks.
In other news, the Rick Riordan website has recently been updated with tons of cool new content, and there’s more to come! Check out the gallery of Egyptian gods, get a closer look at Greek mythology, and find out what’s being conjured up at the House of Life. The FAQ section and interview with Rick are constantly being expanded and updated, so if you’ve got any questions — those are the best places to look!
If you missed my earlier post about contact information, do be aware that I’ve shut myself off from almost all forms of communication so I can keep up with my deadlines. Unfortunately, it will have to be that way for the next year or so at least since I’m in a marathon to juggle two series that I love — Kane Chronicles and Heroes of Olympus — but the good news is I’m on track. The writing is going very well, I’m happy with the books, and everything should be out on time. The Son of Neptune, which I’m polishing up right now, will be published October 2011.
And now it’s back to writing. Have a good week, everyone!