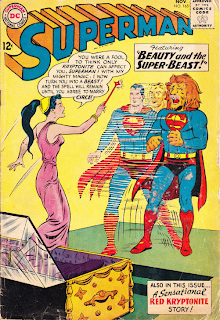 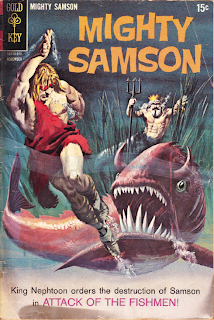 More fun from the family archives! These two comic books were recently unearthed at my parents’ house. I read these as a child but haven’t seen them in at least thirty years. I often tell people that Greek gods were our first superheroes, but I think I’d forgotten just how much of an impact comic books had on my love for mythology.
The Superman issue is from 1963 and features our old friend the sorceress Circe, who turns Superman into a lion. If she can appear in Metropolis and battle the Man of Steel, I suppose it wasn’t a stretch that she could open a spa in the Sea of Monsters and turn Percy Jackson into a guinea pig.
The other very strange comic is from 1969. What Samson from the Bible is doing as a superhero battling King Nephtoon (seriously?) is beyond me, but I’m sure in ’69 people were digging this ‘far out’ story. Interestingly, in this story the action in Neptune’s realm takes place in the sea right next to an alternate version of New York City. Yes, I’m sure that was somewhere in the back of my mind when I was thinking of Percy’s visit to his dad’s palace.
Of course, I read all the standard anthologies of Greek myths, too, but these comics definitely helped me formulate the idea, somewhere in my subconscious, that mythology could happen in the modern world — and be comical as well as adventurous!