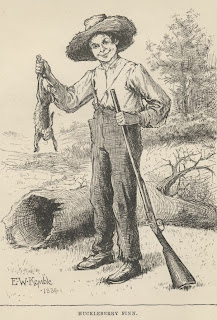 Mark Twain sure is getting a lot of press these days, between the release of his uncensored autobiography and the plans to release a new edition of Huck Finn with ‘slave’ replacing the n-word and ‘Indian’ replacing ‘Injun.’

I’m not surprised that the latter story has caused a firestorm of criticism. Censorship, or even the perception of censorship, will always stir up emotions – and rightly so in a culture that puts a premium on the First Amendment guarantee of free speech.
I’ve been thinking a lot about this new edition of Huck Finn, trying to decide where I stand.

The issue became more personal when I saw the name of the professor who edited the new version. Dr. Alan Gribben was my professor many years ago at the University of Texas, and was responsible for igniting my interest in Mark Twain and helping me find my own voice as a writer.

For the record, Dr. Gribben was an excellent teacher. He was very conscious of the racially charged language in Huck Finn, and was careful to put the novel in its historical context and explain Twain’s choice of words. In class, we spent several days discussing Twain’s language and having a free and open debate about what it was like to read this text in a modern multiracial classroom. As uncomfortable as the ‘n-word’ might be, Dr. Gribben believed firmly that for our purposes, as college English students, the author’s text should be read as it was originally written. He even went out of his way to order editions of Mark Twain’s books that preserved the original page layouts and illustrations.

Am I surprised, then, that Dr. Gribben has edited a version of Huck Finn that replaces the n-word with slave? Not really. Nor can I muster much righteous indignation against the idea.

To be sure, as an author, I am instinctively opposed to censorship. I believe that the author’s intent and word choice should be respected. Students should have access to a variety of unedited opinions, including the unexpurgated text of diverse authors. As a teacher, I believe that history should not be whitewashed. Difficult topics like racism need to be addressed, and books like Huck Finn can help do this. This whole controversy, in fact, is a teachable moment. I hope social studies and English teachers across the country are having discussions about this news story in their classrooms.

On the other hand, I have taught Huck Finn in the classroom – unedited, unabridged. I have taught the book with African American students. It can be done well. It can be a positive experience. But it is a tricky, tricky proposition. I know that it can make students extremely uncomfortable, even with the most careful preparation and conversation. Faced with such a challenge, many educators and curriculum gurus will probably choose the path of least resistance. Rather than teaching Huck Finn in the original, they will simply remove one of the most important texts in American literature from their classrooms. Because of this, I can understand that in some cases, in some classrooms, an edited version of the novel might be a welcome teaching tool, and an appropriate choice.

If the debate were about replacing the language in all editions of Huck Finn, then of course, I would be opposed. But we’re not talking about that. We’re talking about offering an alternate version as a choice for classroom use. I don’t have any problem with offering teachers, students and general readers more choices, especially if it makes the text more accessible and causes less unease for students (and parents) who might otherwise have a hard time getting past the language to Twain’s message, which is a bitter indictment of slavery.

And let’s remember, tinkering with a classic text is hardly a new idea, nor is it usually done with as much delicacy and careful consideration. There are dozens of abridged “young reader” versions of Huck Finn in print that hack huge portions out of the text and also clean up or dumb down the language. There are numerous graphic novel versions. These are commonly used in classrooms without generating national headlines, and take much greater liberties with Twain’s story for worse reasons.
If we want to get upset about altering the author’s text, let’s start by throwing out those dreadful basal readers that offer only carefully abridged, carefully sanitized snippets from novels. Let’s ask students to read actual novels instead. And don’t get me started on the movie versions of novels that are frequently screened in the classroom to ‘supplement’ the unit. Talk about mangling the author’s intent. Watch any of the abominable film adaptations of Huck Finn and you’ll see what I mean. Compared to these things we let pass as educationally appropriate in the classroom, an optional version of Huck Finn that changes two racial epithets isn’t something I can get very angry about.

Of course, I’ll keep reading Mark Twain in the original. Most people will prefer this, and for good reason. Language is important. The author’s word choice is important. Judging from his classroom teaching and his many interviews, I have no doubt Dr. Gribben would agree. But if some teachers find a version without the n-word helpful for classroom teaching, I don’t have a problem with that. In fact, I would start the unit by explaining exactly how the text was modified, and why, and have a discussion in class about whether or not this was necessary. As I said earlier, this makes for a great teachable moment if the teacher has the dexterity to make use of it.

I have no doubt Alan Gribben understood that he was in for a storm of criticism when he announced the new version of Huck Finn, but he did it with the best of intentions, and I applaud his courage. Whether you agree with his decision or not, the controversy is sure to sell more copies of Huckleberry Finn and get more people reading the novel to see what the fuss is about. Mark Twain, who was no stranger to grabbing headlines, would surely approve.