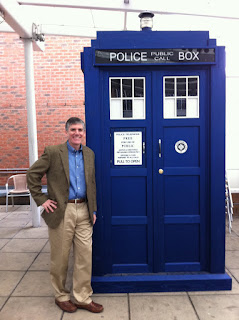 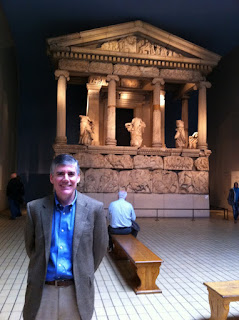 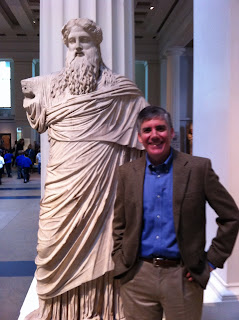 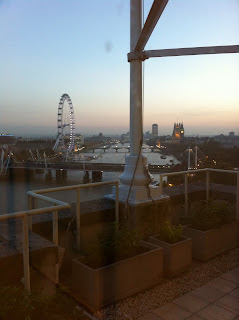 It’s been a good beginning to the UK tour. Yesterday I visited the Wessex Book Festival in Winchester and spoke to a sold-out crowd of about 400. We had a nice time despite the cold rainy weather!
Today I was in London for media interviews. I started the day at the BBC Centre. The TARDIS had appeared outside, so naturally I had to get my picture in front of it. I knocked, but the Doctor wasn’t answering. I appeared on the BBC 1 morning show, then taped a video for the children’s show Blue Peter, which should be on the website by next week.
After that I visited the British Museum for a newspaper interview. That’s me with the Nereid temple in the background, and standing next to Dionysus (aka Mr. D). I ended the day at Puffin Headquarters on the Strand. The view from the tenth floor is spectacular, as you can see above. I was looking right down at the top of Cleopatra’s Needle, thinking of Sadie and Carter Kane.
Tomorrow I’ll visit the American School in London in the morning and do our live webcast in the afternoon. There’s still time to register and join us. Hope to see you online!